Round 15: We've Been Here Before

"You guys are playing again?"

Indeed they were. Luis Scott-Vargas and Jeremy Neeman had become quite familiar with one another over the past year, as this was their sixth time playing each other at the pro level during that time. Scott-Vargas pointed out that Neeman actually leads their series 3-2.

But Scott-Vargas came into the match undefeated in the Constructed portion of the event. It was only his 2-4 Limited record that had dropped him to 10-4 and out of contention for the Top 8.

Neeman's Modern list, like Scott-Vargas's, was also doing most of the legwork. He had gone 3-3 in Limited matches, but 7-1 with his Empty the Warrens combo deck. 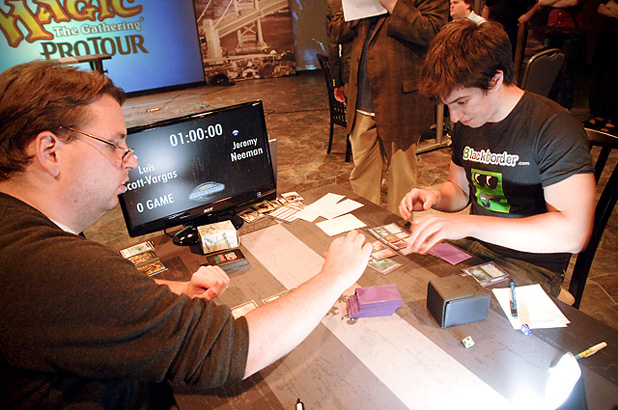 Underdog Luis Scott-Vargas looks to even up his record against the formidable Jeremy Neeman.

Both players were at 10-4, and both were looking for a strong finish. Scott-Vargas trails Owen Turtenwald, who is also playing on Day Two, by 7 points in the Player of the Year race. A top 16 finish would push him closer to his ChannelFireball teammate.

Things did not start well for Scott-Vargas, as he mulliganed to five on the draw, giving Neeman both a card and play advantage.

Fortunately or unfortunately, he didn't have to bear it long. In the time it took Scott-Vargas to muster a Wild Nacatl, Neeman Preordained turn one into a flurry of rituals turn two that left him with 16 Goblins off Empty the Warrens.

"Are you done after that?" Scott-Vargas asked.

When he attacked his 2/2 Nacatl into sixteen waiting Goblin tokens, it elicited a laugh from the crowd. It did not, however, result in any solution to the horde of Goblins headed straight for his life total. 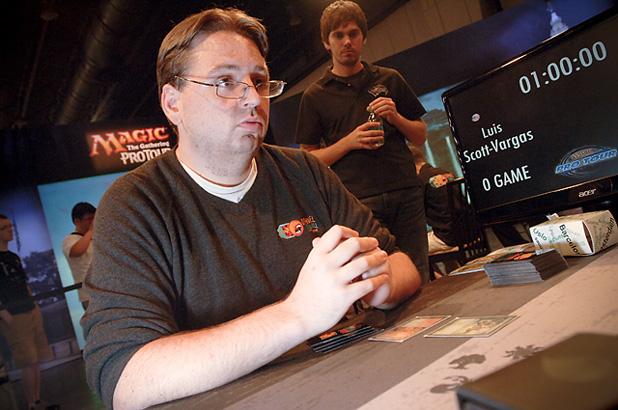 For a guy who professes to love control decks, LSV sure does attack with a lot of Wild Nacatls.

Both players mulliganed to six, and Scott-Vargas led with a Tarmogoyf on turn two.

Much of the reason Scott-Vargas and most of the ChannelFireball crew (here's looking at you, Conley Woods) chose to play their version of Zoo was that the combo decks couldn't always have it turn two or three, and, this time, Neeman simply passed back on turn two instead of exploding for a million (or so) Goblins.

Scott-Vargas's turn three was a big one, as he resolved Rule of Law, limiting the storm player to a mere one spell per turn. Neeman used his one spell at the end of Scott-Vargas's turn to find a Magma Jet with Peer Through Depths. If that Rule of Law had been an Ethersworn Canonist, that Magma Jet would have told a completely different story. As it was, Neeman was looking for bounce or bust.

Serum Visions on his own turn was all Neeman could play, and Scott-Vargas followed up with a Knight of the Reliquary and an attack with the 'goyf.

Since he couldn't storm, Neeman simply played a copy of Empty the Warrens to get two Goblins, neither of which were nearly as large as the 3/4 Tarmogoyf that kept crashing in. Scott-Vargas then used his one spell to Green Sun's Zenith for a Wild Nacatl powered up by Sacred Foundry.

Peer Through Depths yielded a Ponder Neeman could not cast, and Scott-Vargas then Lightning Bolted him down to 8 to threaten lethal.

In came a 3/4 Tarmogoyf, a 3/3 Nacatl, and a 4/4 Knight of the Reliquary. Neeman traded one Goblin token and a Magma Jet for the Nacatl while chump-blocking the Knight with the other token. When a Preordain yielded nothing of use, it was on to game three. 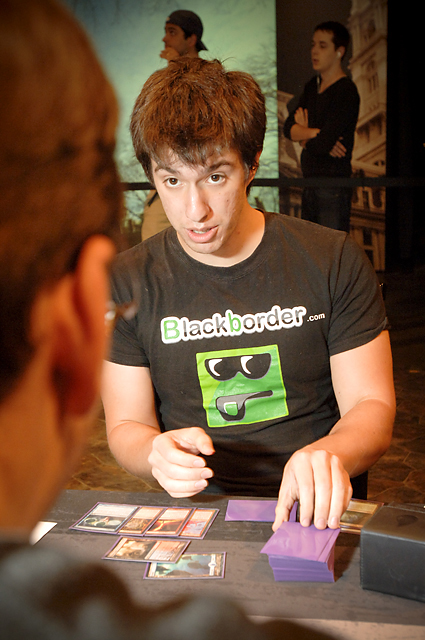 Both players kept with Neeman on the play, a dangerous position for Scott-Vargas.

"Am I dead?" asked Scott-Vargas as Neeman prepared to move to his second turn. We've been here before

But he wasn't. Not yet, anyway. Neeman simply played a land and passed. Vargas made another kitty and used a fetch land to find a tapped a Hallowed Fountain to make it two 3/3s. He was now at 16 and attacked with the first Nacatl.

Neeman went to 13 to make an untapped Steam Vents and then Peer Through Depthsed through some depths to find a Seething Song at the end of Scott-Vargas's turn.

Once again, a flurry of rituals and an Empty the Warrens resulted in eight Goblins. A kicked Goblin Bushwhacker to give them all haste and +1/+0, combined with the damage Scott-Vargas had already taken from his mana base, let Neeman deal exactly 16 damage through one untapped blocker to win it.

Neeman moves on to 11-4 in the world and, apparently, 4-2 against one of the best players in the world over the last year.