players sat at 33 points heading into Round 15, with a thicket of 30-pointers lurking in the back. Pro Tour veteran Antoine Ruel and newcomer Benjamin Peebles-Mundy sat among the 33s, with their eyes on a Sunday seat.

Peebles-Mundy kicked off with lands fixing and turns two and three Hearth Kamis. Ruel had the Mana Leak for the first one, but the second one resolved. Ruel decided turn three was soon enough so he tapped out for his deck's namesake, Psychatog. 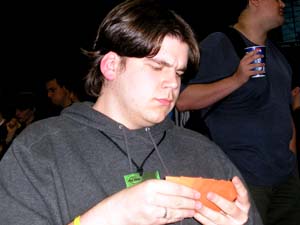 Peebles-Mundy saw too many 'Togs across the table.

Peebles-Mundy, stuck on two lands, was forced to Firebolt the handsomer Ruel's face and send back the turn. Antoine's end step Fact or Faction promised big trouble for Peebles-Mundy. A second Psychatog from Ruel allowed the first to begin his hungry assault. It attacked for 1…this time. As expected, Ruel's second 'Tog was staying untapped for D.

Peebles-Mundy played and Grim Lavamancer, threatening a direct damage victory if Ruel would give him the time. Peebles-Mundy started throwing creatures in front of the Psychatog, both to stem his bleeding and fill his graveyard for the Lavamancer. Ruel's Mental Notes was making sure that the 'Togs were in no danger of dying, and soon Peebles-Mundy was forced to chump with the Grim Lavamancer as well.

Soon after it was all over and Benjamin scooped up his cards. Antoine still had two Counterspells and two Circular Logics left at the end of the game.

Ruel brought in a vicious nine cards, including Ghastly Demises, Meloku, Smother, Razormane Masticores, and Darkblasts. Peebles-Mundy may be able to win in a quick manner, but the long game certainly looked to belong to Antoine. 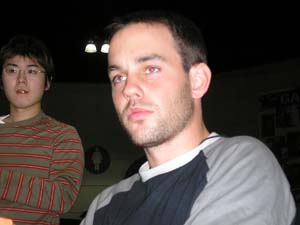 Ruel was poised for his first Top 8 since San Diego in 2004.

Ruel once again decided a Psychatog in play was worth more than anything Peebles-Mundy could cast and tapped out to play his on turn three. Ruel's decision was justified when Peebles-Mundy passed the turn back without playing a spell or attacking with any creature.

Like the previous rout, Ruel end stepped a Fact or Fiction, basically winning the game on the spot. After the split was made and chosen, Ruel had more removal than Peebles-Mundy has cards in hand. A second Psychatog again allowed the first to play offense. Once again Peebles-Mundy was forced into chump-blocking mode, trading his cards in play with Ruel's cards in graveyard.

Peebles-Mundy went for a last-ditch flurry of burn effort, and managed to get Ruel down to 7. Unfortunately for Benjamin, he ran out of gas and Ruel swung in next turn for the kill.

Antoine is now looking for a draw in the final round to secure a Top 8 berth. Pro Tour virgin Benjamin Peebles-Mundy must win his last round, but he too is still in contention for Sunday.