you know how nervous I am? I went to pee last round and I couldn't zip up my zipper, my hands were shaking so bad." That was the opening salvo from Antonino "The Italian Stallion" De Rosa, as he looked to overcome his longstanding curse, and finally play on a Pro Tour Sunday after something like 40 Pro Tours.

De Rosa's opponent is youthful Australian Justin Cheung, who described himself as "just happy to make Day Two." Now he was in the feature match area, ready to play dream wrecker against the U.S. National Champion, and he looked considerably more relaxed than De Rosa. 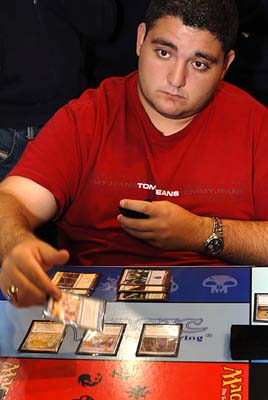 Antonino De Rosa had his eyes on his first Top 8.

De Rosa mulliganned his first hand, but then they were off. De Rosa cast a turn 2 Mourning Thrull, while Cheung ramped to a turn 3 Mortipede via Rakdos Signet. Cheung added additional pressure by casting a Vinelasher Kudzu directly behind it, while De Rosa defrayed at least two of the damage each turn with a Guardian's Magemark on his Thrull. Unfortunately De Rosa found no further action aside from some bounce spells and card drawing, and while it wasn't quick, he died to Cheung's relentless attack a few turns later. The mulligan hand was particularly unkind to the big man.

Cheung cast a turn-two Vinelasher Kudzu in Game 2, but whiffed on his second land drop for a turn before putting his third color into play in the form of a Swamp, (not to be confused with form of a bucket of water). Meanwhile De Rosa quickly built an air force of Surveilling Sprite, Snapping Drake, and Pride of the Clouds, making for an ugly beatdown squad. Cheung put up a struggle, trying to overcome a replicated Vacuumelt and some mana screw, but similar to game 1, the beatdown never stopped and De Rosa evened the match at a game apiece.

Cheung had to mulligan on the play for Game 3, earning a minor release of breath from Ant, who was clearly plagued by a ton of butterflies in his stomach. Cheung kept his six, and then De Rosa took a mulligan of his own, keeping six as well. Mourning Thrull and Skyknight Legionnaire were quickly on the assault for De Rosa, while Cheung countered with Plagued Rusalka, Restless Bones, and all four of his mana colors. Of course, Cheung's Mountain was exactly what De Rosa needed to let his Spelunkers become evasive, as he kept smashing with his 2/2s.

Indrik Stomphowler gave Cheung a fattie, but it KO'd his Signet in the process, and De Rosa was able to postpone a Wrecking Ball for a turn with Remand, dropping Cheung to 6. Wrecking Ball on the Spelunkers and a sacrificial Rusalka left De Rosa with only the Legionnaire, which attacked again a turn later to drop Cheung to four. De Rosa cast Pride of the Clouds directly afterward, looking to end it right there.

Faith's Fetters on the flying lion family brought Cheung back up to 8 with De Rosa at 5 after another attack, but Master of Impediments was sure to keep Cheung's 4/4 on lockdown, and De Rosa cast Novijen Sages on his own turn to give him another warm body, dropping Cheung to 6. Justin drew his card for the turn and had to pass it back to Ant, letting De Rosa tap Cheung's final blocker and push through just enough damage to win.

Antonino De Rosa has finally made it to a Pro Tour Top 8!