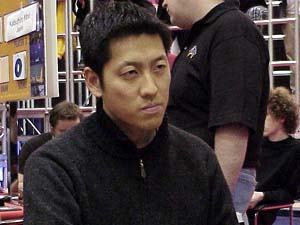 times before this weekend Masashiro Kuroda has gone undefeated on day one of a premier tournament: Japanese Nationals in 2003, Grand Prix Sapporo in 2002, and Grand Prix Kyoto in 2003.

Not once did he make Top Eight.

This is his chance to erase the stigma. He's only managed a 3-4 record so far today, but that's enough to put him within one win. It's do or die, right now.

Mata stared at a one land hand that included two Tel-Jilad Chosens and a Viridian Zealot. Playing first, he couldn't afford to keep. The forbidden peek revealed three Forests on top of his deck, but despite that, the decision was certainly correct. He kept his six card hand, and Kuroda liked his original seven.

The game began slowly, with a turn three Troll Ascetic from Mata as the first creature. Kuroda had no turn three play. On Mata's fourth turn, he sent Ascetic and Blinkmoth into the red zone. Barbed Lightning took down the land and Mata added a Forest and summoned Viridian Zealot.

Kuroda hit his fouth land drop and killed the Zealot with Electrostatic Bolt, then fell to fourteen from the Troll. Mata played a Viridian Shaman and Kuroda hit him with a Pulse of the Forge that came back to the hand. He untapped and played a devastating Arc-Slogger, his only good answer to the Ascetics in the Green deck. Mata looked frustrated. His hopes had obviously been riding on that beast not showing up.

He summoned Glissa Sunseeker and passed the turn. There have been numerous arguments this weekend about whether Glissa or Molder Slug is the better anti-artifact creature, but this is certainly a matchup where Glissa's two toughness can be a liability.

Kuroda played a second Arc-Slogger and Mata answered with the aforementioned Molder Slug. Being mono-Green, he actually has the space to run both. Kuroda counted his own deck and found forty-seven cards. On end step, he domed Mata for a quick two, bringing him to fourteen.

He untapped and lost his Darksteel Citadel to the Slug's ability, then passed the turn. Mata could do nothing. Kuroda milled twenty more off of his library for another four, bringing his opponent to ten. Pulse of the Forge dropped Mata to six. Kuroda untapped and finished it with Fireball.

Mata opened with a turn two Tel-Jilad Chosen, but it was dispatched immediately by Electrostatic Bolt. Kuroda had a turn two Talisman. Mata then played a turn three Troll Ascetic for the second game in a row. As it turned out, Kuroda didn't even have Flamebreaks in his sideboard, meaning that Arc-Slogger was still his best answer. He could only Molten Rain a Forest.

Unfazed, Mata replaced the Forest and played a Tel-Jilad Chosen. It was killed by an entwined Barbed Lightning that took Mata to seventeen. He then added a Fangren Firstborn.

Kuroda played a sixth land and thought. A split Fireball killed the Firstborn and sent two at Mata's dome. However, the Troll Ascetic continued rumbling into the Red Zone. Kuroda was down to eleven.

Mata asked how many cards Kuroda held, perhaps worried about Flamebreak, but decided to play a second Ascetic. Kuroda seemingly had no Slogger, but he did have two Blinkmoths to buy himself some time. He blocked one Troll with a Blinkmoth and pumped with the other to force regeneration. After damage resolved, he hit Mata with a rebounding Pulse of the Forge, making the life totals eight to eleven. He implored his deck for help but had to say go.

Both Troll Ascetics continued the assault. Blinkmoth blocked and pumped itself, again forcing Mata to spend some mana. On end step, Pulse of the Forge made it five to seven and again returned to Kuroda's hand. He slammed his deck.

Mountain practically flew into play. He tapped all six. Pulse and…

The crowd stared with baited breath as lethal damage waited on the stack. Mata sat and thought. He had two Forests untapped, so Nourish was a possibility. 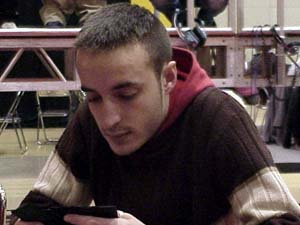 But it was only a bluff. A minute later he dropped his hand face up on the table. Two Bloodscents stared up at the sky. If they had only been Oxidizes, the Blinkmoth chump blockers could have been cleared out of the way and Kuroda would be at six life less than he was now. As in, less than zero.

But no matter. Kuroda had finally done it. Tomorrow he will play in his first Pro Tour Top Eight!

4 Pulse of the Tangle