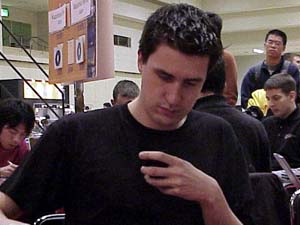 of these players are looking a little frazzled. Fifteen rounds of top-level competition will do that to you. Now they've got to play one more with everything on the line. The winner of this match will most likely get to play on Sunday. Jelger Wiegersma of the Netherlands is playing Affinity. His opponent, Norway's Lovre Crnobori, is with Big Red, a deck designed with the death of Affinity in mind.

Wiegersma kicked off the match with a pair of Aether Vials and a discounted Frogmite. Crnobori made a Talisman and "Big Jelgs" dropped a Disciple into play at end of turn. He untapped and dropped a Blinkmoth Nexus, then Skullclamp, animating the land and eating it for two cards. Crnobori Fireballed the Disciple before it could take huge chunks out of his life total, but Wiegersma's Vials gave him a replacement Disciple as well as an Arcbound Ravager. He ate his board and took the first game.

Crnobori led with Pyrite Spellbomb and a Talisman opposite a board of Skullclamp and Myr Retriever. He had another Talisman but no third land. He was still able to Detonate the Clamp. Wiegersma spilled out a pair of Arcbound Workers and a Disciple of the Vault. The Spellbomb took care of the dangerous 1/1, and Jens got him some more land.

Unfortunately for Crnobori, Wiegersma drew a second Skullclamp. He ate the Retriever, getting back the other Clamp, and then the Worker. The other Worker traded with Jens. Crnobori played another Talisman and could only swing for one with his Blinkmoth Nexus. Electrostatic Bolt kept Wiegersma from drawing cards with his Clamp, but only for a turn. Then Arc-Slogger hit play. 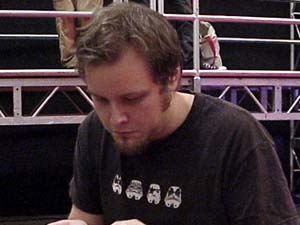 Crnobori had to spend a lot of his library keeping Wiegersma off cards. It was only temporary, as soon Wiegersma was drawing with impunity. He had a Ravager, but didn't like risking it against Crnobori's hand. He dug for a third Disciple. He drew ten cards, then ten more. Still nothing. Crnobori had to get his the hard way, but still no Furnace Dragon to wreck Wiegersma's face. Finally, Wiegersma hit the bottom of his library. The third Disciple was the second-last card. The fourth was the last. He chowed down on ten or so artifacts, and won the match.