With two rounds to go, Francesco Cipolleschi had looked to be all but locked for the Top 8 of this Pro Tour, with twelve wins and only two losses. He was one of just two players at the 36-point plateau, and under different circumstances he would have been in a position to draw twice—or even once—since 37 points looked to be the magic number. He was paired down for Round 14 and lost. There were seven players at 36 coming into the last round, and he was the odd man out of the handshaking into Top 8, paired down once again.

All of this was great news for Elie Pichon of France, who had been trailing the leaders with an unintentional draw earlier in the event and now needed a win to make it in.

Cipolleschi led off with Despise and saw a hand with Vault Skirge, two Signal Pest, Hero of Bladehold, and a pair of Plains, opting to take the Hero. Elie played Memnite and Signal Pest only to have the Pest swatted by Red Sun's Zenith. Elie was able to attack for 1 and play the Vault Skirge and his remaining Pest. 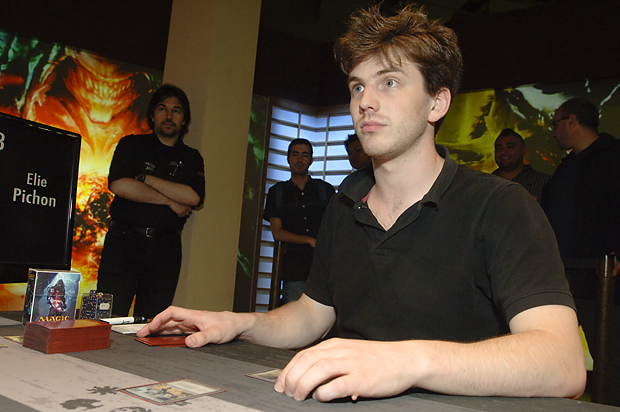 Elie Pichon is hungry for the Top 8, and he won't let Cipolleschi off easy.

Cipolleschi mitigated the damage with Geth's Verdict and then played Oxidda Scrapmelter to take out the Vault Skirge, but Pichon had found his Hero of Bladehold for turn four. Entomber Exarch revealed a Plains in Pichon's hand and helped to take down the Hero in combat when Pichon pushed everything into the red zone.

The Italian cast Memoricide naming Tempered Steel and applauded himself when he saw that there were only two Hero of Bladehold in Pichon's starting deck. Entomber Exarch tussled with a 2- power token the turn later, but there was still one left, and it was whittling down the Italian with help from Signal Pest.

Cipolleschi peeled a card and hid it in the back of the land he was holding to ever so slowly reveal… another land.

After a mulligan from Elie, Franceso's Despise revealed Glint Hawk, Glint Hawk Idol, Dispatch, Vault Skirge, and two lands; he took the Skirge. A second Despise saw a second Glint Hawk, and he took that as well. Elie started to beat down with Idol.

The Italian player dropped a turn-four Koth and swung in for 4 with a Mountain. Pichon attacked Koth for 2 with Idol, cast Glint Hawk, and recast the Idol. Cipolleschi cast Slag Storm and attacked for 4 more, with Koth staying out of Hawk range at 3 loyalty. 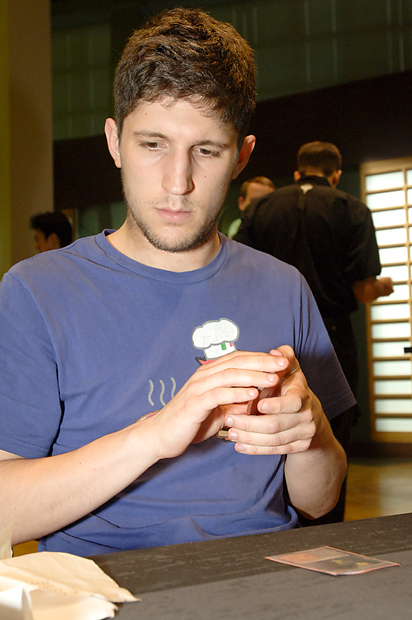 He's had a rough couple rounds, but Francesco Cipolleschi could still pull this out.

Eventually Koth fell, but Pichon was low enough that a pair of Red Sun's Zeniths—with a black one for good measure—were able to finish it off and force Game 3.

Cipolleschi's Despise could take nothing from Pichon's opening hand but what he saw made him shake his head. A turn-two Glint Hawk Idol got scary on turn three with Tempered Steel, and was switched on by Mox Opal. There was another Glint Hawk Idol and Glint Hawk a turn later, not to mention Inkmoth Nexus getting in for three poison. A second Nexus was enough for the Italian to say some words I vaguely remember my grandmother saying when she grabbed a hot pan by mistake when I was a small child. I got in trouble for repeating them then, and I will not repeat them now.

Final result: Elie Pichon wins two games to one and advances to the first Pro Tour Top 8 of his career.