Round 16: Bob Maher vs. Dave Williams 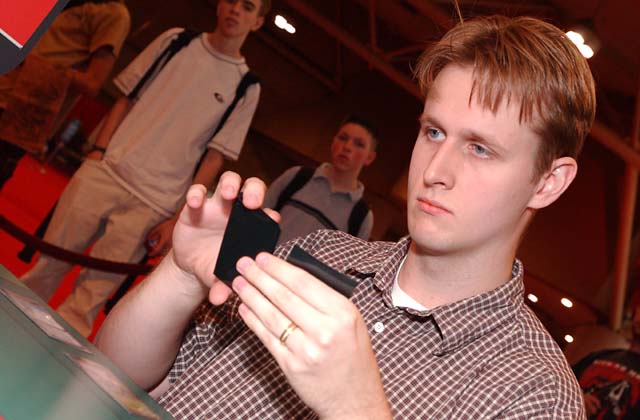 Both players were anxious heading into this match. Current Player of the Year Bob Maher felt he had tough tiebreakers, and could not afford a loss for the last two rounds if his hopes of a Top 8 were to stay intact. His signature Oath deck had only tiny adjustments from the original that served him so well in the past: one copy of Overgrown Estate in the main, and Pernicious Deed in the sideboard.

Meanwhile, Dave Williams was kicking himself for taking Back to Basics out of his sideboard. The anti-nonbasic land enchantment was the only card he felt he could count on to win against his opponent's versatile control deck.

Bob got off to a slow start, watching an Elvish Lyrist come out and beat on him for three turns before laying out both Oath of Druids and Sylvan Library. By that time, Dave had a Winter Orb out, and felt he should sack the Lyrist as quickly as possible to maintain his advantage.

With no Oath, Bob used the library to store up on cards (and lose life) while he watched an Ophidian come out and get a card for Dave. Then, he hard cast a Crater Hellion on turn six to clear the board. Dave followed with a Deranged Hermit; the only difference was that Dave was able to work around the Orb to pay the echo for his creature the following turn, whereas Bob had to let his go. Bob tried to play Powder Keg as an immediate threat; but Dave saved his squirrels with a Force of Will, certainly worth pitching even a Tradewind Rider. The Texan swung to bring his opponent down to 4 life.

Facing a formidable army, and locked down by the Orb, Bob looked at his options during his upkeep and decided to move on to game two.

This game, with Bob choosing to go first, saw both players take a single mulligan. (Dave almost kept a no-land hand because of the explosive potential; he winced when he looked at what his first draw would have been: a forest. But don't let that teach any of you young whippersnappers out there to keep a no-land hand! Bob's expression while listening to Dave talk about his no-land hand theory suggested to all observers that conventional wisdom is the way to go, here.) While Dave again started with an Elvish Lyrist, Bob could cast Enlightened Tutor in time to find and play an Oath of Druids on turn three . . . which met up with a Force of Will.

Dave continued the pressure with a Winter Orb (and to anyone who finds unacceptable the idea that an Orb could be considered a beatdown card, we share your pain), but could only find a Tradewind Rider to join the Lyrist. Seeing Bob with one counter on the Powder Keg, and holding two Birds of Paradise in his hand, Dave tried to up the stakes by putting out a second Winter Orb. Bob decided to keep the Keg at one and blew it up to get the Lyrist out. This led to a bit of back and forth, as Dave's two Birds could now come out and work with the Tradewind Rider to bounce the Oath. 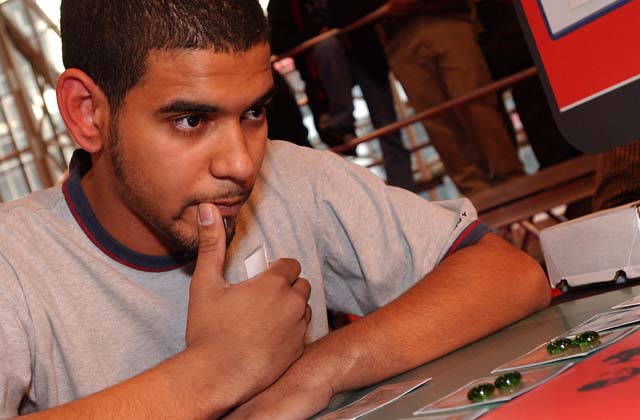 This could have gone on longer than a turn or two; but Dave decided that an Emerald Charm (from the sideboard) was a better option. In return, Bob used a brief moment where the Tradewind Rider couldn't activate (a Bird tapped for mana to cast Ophidian) to remove it from the game with Swords to Plowshares.

Before long, the Player of the Year found another Tutor for another Oath, and the Oath in turn found a Crater Hellion to clean the board. Bob let the Hellion die, and then Oath again one turn later for a Morphling. As is customary, the Morphling went the distance: a second Powder Keg grew to two to relieve the Orb's burden; and then Bob was free to stop the only other threat Dave presented: a Deranged Hermit, which begat a Counterspell, which begat a Force of Will, which begat a Pyroblast (from Bob's sideboard), which begat a Mana Leak, which begat Bob tapping three lands for mana while Dave smiled and scooped.

The decisive third game involved no mulligans; Dave went first. While Dave suggested Bob was "lucky" with a turn two Oath, Bob likewise felt that Dave's timely Emerald Charm involved a bit of good fortune. A third turn Tradewind Rider, combined with a Wall of Roots and a Quirion Ranger, began the tough work of keeping Bob's Powder Keg off the board, and then refocused on an Oath of Druids which came out on turn six. With a Wall of Roots and Bird of Paradise joining the fray, Dave felt comfortable letting the Keg grow a counter, and then blow as he got to keep the Rider and two creatures (Walls) left to keep the Oath bouncing off the board.

This continued for a few turns, and then Dave found a Deranged Hermit, which gave him the luxury of an actual offense. He swung to bring Bob down to 10, and then cast Winter Orb, which put the true hurt on Bob as he now only had a couple of lands left available to him. When the Rider bounced a Tundra at the end of Bob's tenth turn, and the weenies rushed in for the fatal blow, Bob smiled and extended his hand to his good friend. He couldn't hide his disappointment, though; next round's match may or may not save his bid for the World Championship.