Round 16: Chan Breaks Through

Of them, only Chan has the opportunity to rectify that situation here in the last round of Swiss play at Honolulu. If Chan can pilot his Owling Mine deck past German upstart Michael "Vin" Diezel and his Nantuko Husks, Chan gets to play on Sunday. Should Diezel win, he'll need tiebreakers to fall his way.

One of Chan's unqualified countrymen came up with Chan's decklist, but it was Rookie of the Year Pierre Canali that talked him into playing it, claiming it was a great metagame gamble, as opposed to the Greater Gifts deck Chan had brought with him to the even. Unfortunately, neither Chan nor Canali had the cards necessary to build the deck.

Chan's roommate for this event-Worlds Top 8'er Andre Coimbra-had purchased a ton of boxes of Ninth Edition here in Hawaii because they were so much cheaper than in Europe. So they got busy opening Ninth packs on Friday looking for the key pieces: Sudden Impact, Howling Mine, Sleight of Hand, Boomerang, Pyroclasm, Exhaustion, and Shivan Reef. They found enough of what they needed and Chan bought the remaining pieces from dealers before the tournament began.

Chan went first in Game 1 and got ahead on mana by using two Boomerangs and an Eye of Nowhere on Diezel's first land. Diezel had to discard only twice, however, because he managed to sneak a Plagued Rusalka into play. A Howling Mine followed by a Remand and an Exhaustion stymied the German until the dread Ebony Owl Netsuke could come into play.

By the time Diezel was able to resolve a Castigate, Chan had built up a hand of 2x Exhaustion, 2x Sudden Impact, and another Howling Mine. A second Castigate let his strip out the red damage spells, but it made no difference. Back to back Exhaustions and a second Owl sealed the deal in Chan's favor.

"It would have been a different game had I won the die roll," lamented Diezel as they sideboarded.

Diezel came out quick with Isamaru and a Plagued Rusalka. He saved the former from a Pyroclasm by pitching a Mortify, although he could have prevented two to the Rusalka and one to the Hound if he knew how his own cards worked. The Shoal is a nightmare card for the Owl decks because (a) it is free (b) it can be used to get under seven cards in a pinch and (c) it can nullify what little red removal the Owl deck has.

Chan deployed two Mines and a Kami of the Crescent Moon and was desperately trying to keep Diezel from assembling his Husk + Promise of Bunrei combo via series of Boomerangs and Exhaustion.

Diezel eventually got everything into play, then treated Chan to a bit of his own "exhausting" medicine by dropping Hokori, Dust Drinker. Chan nodded gravely and untapped a lone Steam Vents. 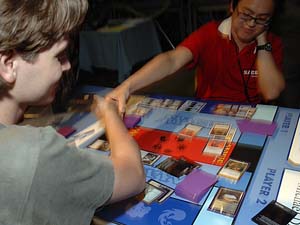 He needed to draw a basic Island in his four cards to allow him to Boomerang the 2/2 legend, and he did so with the last card. Diezel sent the team-four tokens, a Hound, a Husk, and Dusty-and Tiago made the only play that would keep him alive: block the Husk with the 1/3 and Boomerang Dusty. Chan hung on at one life, untapped all his lands and drew two Sudden Impacts to go with the two Owls in his hand. He pumped the fist, tasting his first Pro Tour Top 8, then paused because he remembered that Shining Shoal could wreck his day.

With eight mana at his disposal, Chan thought for a long time (enough to get a slow-play warning from the table judge), then made the play that gave him the best chance to win. With Diezel at five and holding seven cards, he dropped both Owls and left four mana up for Sudden Impact.

If Diezel had a Shoal in this case, he'd have to use it on one of the Owls, which would subsequently deal no damage when their abilities resolved because Diezel would only have five cards. Then, after he drew back up to eight, Chan could Sudden Impact him and win unless he drew one of the remaining Shoals.

Of course, Diezel had no Shoals at all and pointed out that it should have been obvious as he would have used it to win during his last attack, redirecting the one damage the Crescent Moon dealt back to Chan.

Tiago Chan makes his first Top 8 and will be representing all the Owling Mine players in this wacky tournament.