Round 16: Cross Your Fingers and Hope for Tiebreaks 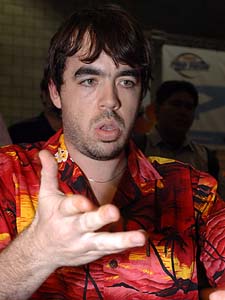 Moreno has certainly proven this weekend that his finals appearance in Los Angeles was not a fluke. Craig Jones finally overcame his own curse and entered the Top 8 two rounds ago courtesy of Moreno technology, and Billy has given himself a chance of making the Top 8 as well if he can overcome one final opponent.

Sitting in Moreno's way is pint-sized fireball Ben Goodman, playing the Ghost Dad spiritcraft deck that has turned quite a few heads here this weekend. Goodman gave as good as he got in his match with Osyp Lebedowicz a couple of rounds ago, and is hard not to root for, especially when he is piloting such a saucy rogue creation. Regardless of who wins, they will still need external help from results in other matches to swipe the eighth and final Top 8 slot.

Goodman began things with a mulligan, not an ideal start against Moreno's fast deck. Moreno cast a first-turn Kird Ape off of Stomping Ground, immediately putting the Ape into overdrive. Lighting Helix on Dark Confidant gave Billy an early lead, and he followed that by casting Savannah Lions and then a second Helix on a second Bob from Goodman. Goodman chose to redirect two points of the damage to the Lions, removing Indomitable Will in the process.

Moreno continued the Onslaught with Watchwolf and then Kami of Ancient Law, while Goodman was unable to find more creatures and had to cast Strands of Undeath on Moreno's Kird Ape, forcing Billy to discard two lands. Just as Goodman looked to stabilize by making a token demon with his Tomb of Urami, Moreno pointed six points of flaming filth at Goodman's dome, snuffing his five life out like one of Moreno's cigarettes.

It was Moreno's turn to mulligan in Game 2, and his start showed that his six-card hand was a bit substandard as well when it delivered only a Watchwolf and a turn-three unforested Kird Ape. Meanwhile, Goodman was building a tidy little army, with Dark Confidant, Thief of Hope, and Plagued Rusalka gumming up the board while Goodman's Shoals wreaked havoc on Moreno's men and burn spells.

Moreno had a secret weapon in Glare of Subdual letting a fresh Isamaru, Hound of Konda and Kami of Ancient Law defuse Goodman's counterattacking ability, and threatening to allow one all-out attack plus a burn spell to kill the little leprechaun. He swears you'll never get his lucky charms.

Helix and sacrificial lambs to Rusalka left Ben short on men, but Pillory of the Sleepless locked up the Watchwolf, leaving Moreno's Kami of Ancient Law to square off against Goodman's Thief of Hope. Goodman's margin for error was now razor thin, with the board practically even, but Moreno's deck is built for topdecking in situations like this, and it once again delivered, putting Char into Billy's hands right on schedule. That Char gave Moreno the remotest of chance of making his second Top 8 appearance.