This is what the final round of the tournament should come to. Nothing is more entertaining than a must-win game featuring high-level players. If you don’t know who Guillaume Wafo-Tapa is by now, I’m not sure how you found this web site. The man has taken control of the Magic world as of late, and just refuses to let go. By virtue of an unintentional draw, however, he’s been forced into a “win or go home” situation. The man trying to prevent him from reaching his second consecutive Pro Tour Top 8 is Nico Bohny. Bohny has been around the Pro Tour for a few years now. He was a member of the World Champion Swiss team, has a win at GP–Torino under his belt, and most recently made Top 32 at Pro Tour–Kuala Lumpur. 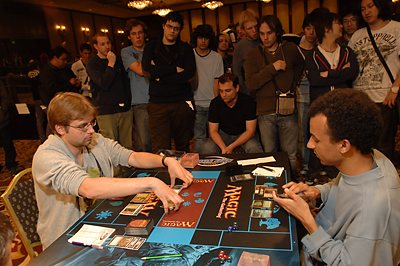 Nico Bohny and Guillaume Wafo-Tapa are both after a Top 8 slot.Wafo-Tapa won the die roll, and lead off with a rather colorful trio of Vivid lands. Bohny used his first-turn Treetop Village to get himself the first full-time creature. His Kitchen Finks were going to have to work overtime to keep the Frenchman from making his second consecutive Pro Tour Top 8. Wafo-Tapa used a Careful Consideration during his next main phase to dig for some business, and to help him get rid of some of the superfluous lands he’d drawn. Unfortunately, his Consideration offered him little in the way of spells, and, even after discarding two lands to the Consideration, he was still left with three in his grip. Bohny became acutely aware of this when his Thoughtseize stripped Wafo-Tapa of his Makeshift Mannequin, leaving him a Cloudthresher and a pair of Slaughter Pacts.

After his Finks went to work on Wafo-Tapa, Bohny recruited big poppa Doran to his side of the board. Doran, the Siege Tower effectively shrunk the Finks to a 2/2, but with a virtual 5/5 entering the fray, I don’t think Bohny was too worried about the change. All Wafo-Tapa did on his following turn was play his Reflecting Pool and pass the turn. His Slaughter Pacts were a little impotent in the face of Doran. Blackness confirmed—he’s got soul.

Bohny took a huge bite out of Wafo-Tapa’s life on the next turn as Treetop Village, Kitchen Finks, and The Doran knocked him down to 7. Wafo-Tapa elected not to Slaughter Pact the Village, since next turn would afford him the mana required to play his Cloudthresher and Slaughter Pact an attacker. When Bohny made an identical attack on the following turn, Wafo-Tapa went for the ‘Thresher. It knocked him down to 5 but put a huge body in front of Doran. He also, as expected, went for the Slaughter Pact on the activated Treetop. In response, however, Bohny had a Nameless Inversion for the Cloudthresher. When Doran is out, Inversion effectively becomes -3/-3, which was good enough to kill the ‘Thresher while leaving Doran in play. The Finks made it through and dropped Wafo-Tapo to 2. He was left with no creatures, no blockers, and no spells that could remove Doran. After paying for his Pact and failing to draw a Cryptic Command, Wafo-Tapa conceded.

Wafo-Tapo’s deck didn’t provide him with any answers to Bohny’s early Doran. None of Wafo-Tapa’s permanent removal spells are able to get rid of it, and he only has a few ways to deal the requisite 5 damage to kill it. Wall of Roots is just an absolute beating against Doran, but you have to get them early... and avoid using them for mana. 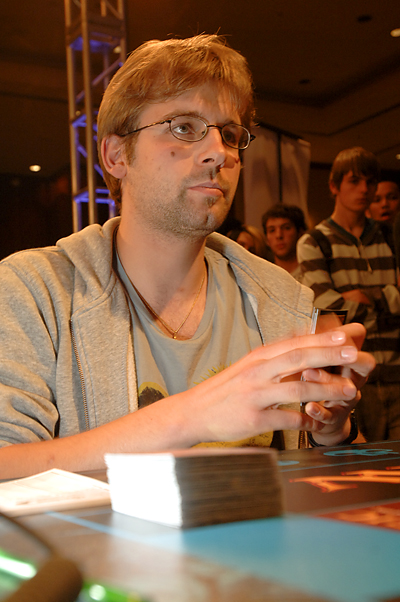 Nico Bohny has his eyes on the prize.Apparently, Wafo-Tapa’s deck was reading this as I wrote it, because it managed to provide him with a second-turn Wall of Roots. Unfortunately, it was going to be put to the test immediately. Bohny had a first-turn Birds of Paradise that made him a second-turn Doran. Turn-two 5/5. Yehokay. To complicate matters, he also had an Oblivion Ring to remove the offensive Wall of Roots. When Doran tried to run across the clear lane, Wafo-Tapa had a removal spell of his own, and used a Cryptic Command to Repel the big beater.

Wafo-Tapa had a Kitchen Finks on the next turn to give him a bit more time to establish control. Unfortunately, the return of Doran meant that the Finks weren’t going to be able to trade with opposing Treetops. Wafo-Tapa was able to find another Wall of Roots before any attacking started, though, and as long as it could stick around for a few turns, it was going to be a thorn in Bohny’s side. A Thoughtseize from Bohny removed a Makeshift Mannequin from Wafo-Tapa’s hand, leaving him stranded with a pair of land and relegated to the top of his deck for hope. Doran bashed in and traded with a Wall of Roots (delicious irony), but was immediately replaced by another Doran from the Switzer (it’s a real word—look it up).

When Bohny sent his Doran and Treetop in on the next turn, Wafo-Tapa’s Finks took one for the team in an attempt to lengthen his life span. He was drawing off the top of the deck and needed some time to get there. Bohny tried a Bitterblossom, but it met the Rune Snag Wafo-Tapa had drawn for his turn. Useful, but not the card he was necessarily looking for. When the following attack sent two Treetop Villages, Doran, and a Birds of Paradise in, Wafo-Tapa was forced to use his freshly drawn Makeshift Mannequin (getting warmer) to return his Wall of I-Eat-Doran to play. It decided to eat a Treetop Village as an appetizer, saving the Siege Tower for the main course. Bohny followed that up with a Bitterblossom, just cementing his grip on the game.

A pretty sizable crowd of players and Wizards staff had gathered to watch this match, and after seeing the Wall of Roots eat the Treetop Village, Randy Buehler chuckled a little behind me.

“Wall of Roots just blocked Treetop Village and killed it,” Randy remarked. “How many times have you seen that same block with a different result?”

Bohny had the hammer on the following turn, though, using Profane Command to break the Makeshift Wall apart and sending a couple of Treetop Villages and a legendary Treefolk to put the hurt down. Wafo-Tapa had to chump the Siege Tower with his Finks, and he dropped to nine. A Kitchen Finks for him was enough to return him to 11, but he dropped all the way back down to 7 after the ensuing alpha strike. When his draw failed to reveal a “get out of jail free” card, he shook Bohny’s hand.

After the match, the judge who was responsible for putting players’ names and countries on the boards in the feature match area came up to apologize to Bohny. Instead of his native Switzerland, Bohny had been listed on the boards as being from the Czech Republic. DCI reporter lists each country according to a three-letter code, which for Switzerland is CHE (you got me on that one) compared to the CZE of the Czech Republic. It was an honest mistake, and Bohny got a good laugh out of it.

“Yeah,” said Bohny. “I might have to go get a Czech Republic shirt before the Top 8 tomorrow.”