Round 16: Daniel Zink vs. Jin Okamoto 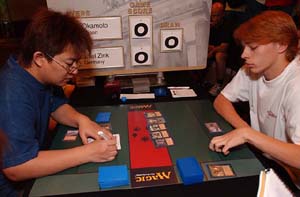 Daniel Zink was the 2001 German National Champion and was in the midst of an impressive run toward another title on Sunday. He sat atop the standings with a stunning 13-2 record. Breathing down his neck was the last APAC Champion, Jon Okamoto at 12-2-1. Both players were likely to make the Top 8 but Jin needed a win to assure breaking his streak.

The same year that Zink was wearing the sash of the German Nationals Championship, Jin fell one match short of making the Top 8 at Worlds. He finished an excruciating tenth. One year layer, he climbed a spot to finish an even more painful ninth at Pro Tour Los Angeles. If he hoped to assure himself of a Top 8 berth he would need one more victory.

Both players are wielding brutally fast decks. Jin is playing a goblin deck—that's actually not fair to lump it in with the other goblin decks. His deck is a Japanese concoction that abuses Goblin Matron, Goblin Recruiter AND Goblin Ringleader to create a combo-deck feel. While it still is capable of the Lackey/Siege-Gang combo there are myriad ways that the deck can win.

Zink's deck—Reanimator—would give him a favorable match-up against most goblin decks but Jin had been tearing it up all afternoon regardless of what was thrown his way.

Jin opened with the terrifying Goblin Lackey and sent the turn back to a thoughtful Daniel Zink. Zink had a nuts draw and he was trying to find the best way to implement it. He finally decided on casting Cabal Therapy on himself naming Verdant Force. When he revealed his hand he showed off an Entomb, Exhume, Reanimate, another Swamp and Duress along with the bin-bound creature.

He sent the turn back to the Japanese player and tossed his cards down on the table and stared defiantly at his adversary. It was the 'Siege-Gang or no?' stare. Jin took a long time to make his decisions and finally cracked with the Lackey and played a free Warchief. A second Mountain allowed him to play a Piledriver and a Goblin Recruiter—no the first card Zink would need to read this match. The recruiter set up his next seven cards to be some combination of Gempalm Incinerator, Goblin Ringleader, two Piledrivers, Goblin Matron, Sparksmith, and a Siege-Gang Commander.

Zink shrugged and conceded. That was about the best draw his deck had to offer and he still wasn't even in the game. Of course it would have been different had he played first-right?

Both players sideboarded heavily for the second game. Thrashing Wumpus, Contamination, Engineered Plague, Vendetta, and a Thrashing Wumpus all came in for a variety of cards.

The most important card for Jin in this match-up post sideboarded? 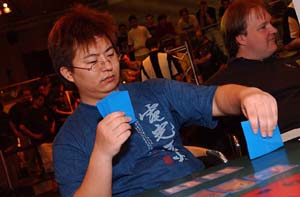 Zink's hand of Wumpus, Entomb, Cabal Therapy, Polluted Delta, Vamp Tutor, Visara, and Vendetta was solid but he needed to have another land to cast Entomb EOT, upkeep Vampiric Tutor for Reanimate and play a land to cast it. Without that second land he would be off by a turn and he wasn't sure how much time he had to spare. Despite those concerns he kept his hand.

Jin on the other hand could not keep a five-lander with only Fanatic and Rites of Initiation as his spells. His second hand was better but had not explosive and he kept it. Zink decided to see what Join had going on and cast Cabal Therapy for Goblin Lackey. He whiffed but saw a Piledriver, Fanatic and a Goblin Assassin.

The crowds had been ridiculous in the feature match area but when they started murmuring about the previously unplayable goblin you became aware of the crowd's mass. The judging staff had their hands full just keeping the spectators back off of the stage and containing them along the rail.

Jin played the Fanatic on his turn and sent it back. Zink drew the second land—a Swamp—and played it without a play. Jin swung in for one and played a Piledriver. The German Entombed a Verdant Force and went to sixteen to Tutor for Exhume.

When he cast the Exhume, Jin sac'd the Fanatic to get a point in and the Fanatic came back along with the fattie. Jin could not get through and played a Goblin Warchief with no attack. When the turn came back to Zink he mused about the text of Goblin Assassin and to his credit he remembered it correctly.

When the various internet pundits mused about the state of post Scourge/Core Set extended I am certain that no one ever imagined a Magic World Championship where the top player in the event would be contemplating a flashed back Cabal Therapy naming Goblin Assassin—and that it might just be the correct play!

With a guilty smirk—and to the delight of the swelling crowd—he did just that. Even Jin had a laugh at the absurdity of the situation. He saw another Warchief and a Goblin Ringleader as well.

On the next turn, Jin played the Warchief but before it could resolve, Zink Vendettaed the first one. Jin only had two mana left and he didn't want the double Warchief to power up a Ringleader. Zink fell to eleven on the all out attack.

He took Jin down to six on his next battle and when Jin played his Ringleader it turned up a Fanatic, a lackey and a Goblin Sharpshooter—bad news indeed for Zink. No attacks were forthcoming though and he played a Fanatic and passed the turn.

Zink dug for an answer with Careful Study. He had to go to ten to do so from a Polluted Delta. He found an Entomb and used it to ditch a Cabal Therapy, which nailed the Sharpshooter. Jin could not climb out of the hole and they moved on to Game 3.

This match was very exciting and there was a buzz throughout the hall as players kept pressing up onto the stage for a better vantage. Mark Rosewater and the judges would shoo them back but as soon as they turned to do something else the tide would roll in again. Finally, the event staff found extra barriers to create a temporary rail inside the area to keep them at a reasonable distance.

Jin kept an opening hand with two Mountains, Goblin Lackey and Siege-Gang Commander among his cards. Zink had to pitch his first hand with Island, Brainstorm and Careful Study because it had no source of black mana and he did not want to stumble for mana against this speedy deck.

His second hand was fine and Jin led off with Lackey. Zink smoked it with a Vendetta during the next attack. Jin played a Goblin Recruiter and set up his next six cards to be two Piledrivers, Matron, Lackey and Goblin Warchief. 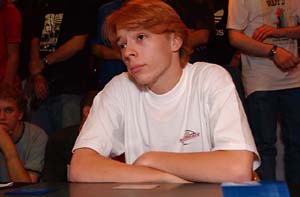 With time called Jin was playing to win into Top 8 and Zink was playing for the tie he needed to get there himself. On the first extra turn, Jin cast a Ringleader and scooped up a pair of Piledrivers and two other goblins. He was not prepared to attack into Zink's army of insect tokens and passed the turn. During the end of the turn, Zink cast Vampiric Tutor and narrowed his choice down to two cards—Engineered Plague and Contamination. After much debate he took the latter and played it on his turn.

Jin was puzzled and thought for a long time about how to play his turn with his lands only making black mana. He did have the Prospector and the Warchief so he could maneuver pretty well. He started by sacrificing the Ringleader to play a Goblin Matron, which found a Sharpshooter. The Sharpshooter was played with the aid of a sacrificed Lackey.

From there he wiped out Zink's army with the hasty Sharpshooter. Zink swept his tokens off the board with a disgusted sweep of his arm and waited for the inevitable. A pair of Piledrivers took the place of some extraneous goblins—the Matron and the Sharpshooter—and Zink extended the hand.

He knew he had made a mistake and should have taken the Engineered Plague. It should not cost him a berth in the Top 8 but if it does he will have a bitter taste in his mouth for a long time. It turns out he just overlooked the lowly Skirk Prospector when making his decision.

The crowd exploded after the match. It had been one of the most exciting set of games anyone could remember. To top it off, Jin Okamoto was assured of a berth in the Top 8 of Worlds—the first Japanese player to achieve that status in the game's ten year history. His string of almosts was at an end.