are the flavor feature matches, gone are the gimmicks, it's now down to the business matches featuring players fighting it out for a seat on Sunday. Katsuhiro Mori and Paulo Vitor Damo Da Rosa joined me at the table, and my heart sank as the Brazilian promptly offered the reigning World Champ an intentional draw. Mori declined and started the game out with a Flooded Strand, signaling that he was also playing the same four-color Psychatog deck as the rest of the Japanese players. Damo da Rosa quickly showed his colors as being the Other White Meat (Boros) with a turn-one Isamaru, Hound of Konda.

With a frown, Mori tried for a third-turn Psychatog, only to see it fall under an end-of-turn Sudden Shock from Damo da Rosa. When Damo da Rosa tried for a Molten Rain a turn later, Mori swatted it away with a Counterspell and clearly not liking where this was headed, asked Damo da Rosa if he still wanted a draw. Damo da Rosa was as surprised as I was, and while he happily accepted the offer, I hastily unplugged my laptop and scanned the feature match area for another match to cover.

Round 16, Take Two: One More Round
Itaru Ishida (JPN) vs. Paulo Carvalho (PRT)

Thankfully, these guys were playing the same decks as the other two, and so I got to pick up just where we had left off with Carvalho aiming a Molten Rain at Ishida's Oboro, Palace in the Clouds, and having it countered by a Force Spike. Things were looking better for Ishida, as he Spell Snared a Goblin Legionnaire, Counterspelled another, and was only facing a Grim Lavamancer in the Red Zone instead of the Legendary Hound of Harassment. Carvalho was managing his resources, choosing to swing with the Lavamancer while he fattened up his graveyard to bring a pair of Barbarian Rings online. Ishida cleared the way for a Psychatog with a Duress, nabbing one of two Lightning Helixes and seeing no sign of the dreaded Sudden Shock. But Duress failed to account for the top of the deck, and Carvalho proceeded to rip the Split Second off the top and send the 'Tog packing never the less. Ishida could only chuckle as he followed his Psychatog up with another, giving Carvalho cause to frown. Having already thrown a Firebolt here and a Lightning Helix there, Carvalho was left doing the math to see if he could take down the last 9 points Ishida was clinging to before the Psychatog could Go Large.

It didn't look hopeful, and most Boros players would usually despair at this point, but Carvalho threw both Barbarian Rings at Ishida and started chewing up his Graveyard with the Lavamancer. Seeing that Carvalho had just enough gas in his tank to see it through, Ishida went all in with his Psychatog, but came up 1 damage short. The Lavamancer evened up the life totals at 1 each at the end of Ishida's turn, and then untapped. If this were video footage, the camera would quickly pan away from Carvalho with his hands poised over the Grim Lavamancer and Sacred Foundry to show Ishida quickly snatching up his cards and shuffling up for Game 2. 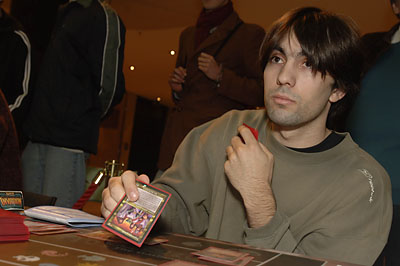 Carvalho lead with a tapped Sacred Foundry and baited Ishida with an Isamaru the following turn. Ishida Counterspelled the Hound, only to have Carvalho use the opening to sneak out a Pithing Needle on Psychatog. Ishida tried to stabilize with a Bottle Gnomes, but Carvalho made recovery difficult with a couple of Paladin en-Vecs. A Duress revealed two Sudden Shocks, which, combined with the Paladins, meant that Ishida could he in danger of not even being able to snack on his Gnomes when needed. Carvalho has relentless with his Paladins, while Ishida's deck offered little in the way of answers as no Meloku sprang forth to protect him. Ishida drew his card and shook his head before shaking his opponent's hand. "Top 8?" he asked. "One more round!" Carvahlo replied, the Top 8 almost within his reach.