The final round, and it all came down to this. Both players sat in a perilous win-and-in situation; Damo da Rosa's extra point put him in striking distance, but his tiebreakers were unfortunately poor. Add to that the fact that they are countrymen from Brazil, and you have the makings of a bittersweet story.

Damo da Rosa opted to play first and had the opening hand advantage, six cards to five. He led with a Raging Ravine and two Scalding Tarns, but Medeiros Merjan clawed back to at least one advantage—he went to 22 with a pair of Sejiri Refuges. Damo da Rosa widened the gap with two fetches and another land to try to land an early Jace, but Cancel took care of it. 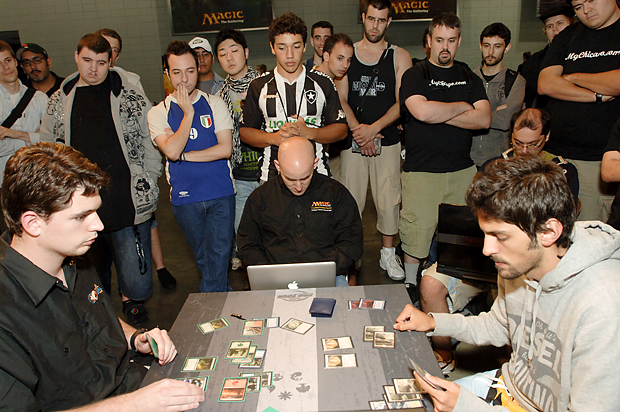 Paulo Vitor Damo da Rosa, left, and Guilherme Medeiros Merjan battle for the chance to represent Brazil in the Top 8.

Medeiros Merjan had no fourth land, but he echoed the previous turn with another Cancel on Damo da Rosa's second Jace. Guilherme had a pair of Spreading Seas for Paulo's Ravine and Forest, but Damo da Rosa one-upped him with a third copy of Jace.

The multiples continued with two Walls of Omens entering the battlefield for Medeiros Merjan, but Damo da Rosa seemed unconcerned, continuing to press ahead with his Jace-fueled card advantage. He played and broke a Misty Rainforest for a Forest, at once solving some mana problems and getting rid of junky cards. An Oracle of Mul Daya joined the table for Damo da Rosa. The life totals stood at 22-17 in Medeiros Merjan's favor, but Damo da Rosa was quickly stealing the game with his powerful card advantage engines.

Guilherme had only a Journey to Nowhere for the Oracle of Mul Daya, then passed with four mana up. Paulo Vitor replaced his Oracle and then started some shenanigans. He played Halimar Depths, reordered his library, then used Jace, reordered again including some cards from his hand, and then played a second Halimar Depths off the top to reorder once more.

Medeiros Merjan had only another Wall of Omens, utilizing a more traditional "normal card draw" rather than deck manipulation. He eventually also attacked Jace with a Celestial Colonnade but Damo da Rosa had the answer in a kicked Burst Lightning.

Paulo continued to manipulate his deck and found two copies of Goblin Ruinblaster. His ten lands combined with the mana from a recently added Lotus Cobra meant he could kick them both to take out all but one of Guilherme blue sources. Still, Paulo did not attack, unable to crash through the army of 0/4s.

Regardless, Medeiros Merjan decided it was about time to reset, and did so with a Day of Judgment. Damo da Rosa just shrugged and binned his board, excepting Jace, the Mind Sculptor. He had a Sphinx of Lost Truths with kicker next to pour on the advantage. Gideon Jura joined forces with Medeiros Merjan to try and stop the bleeding, but an activated Raging Ravine, the Sphinx, and a new Goblin Ruinblaster (also eliminating the last blue source on Medeiros Merjan's side) took down Gideon with ease.

On the back foot and getting overwhelmed by Jace's continuous card advantage, Medeiros Merjan could not stop the beatdown of the two active Raging Ravines under Damo da Rosa's control, and scooped soon thereafter.

Again, both players traveled to the depths of the Halimar Reef, using the foresight they gained there to set up their next draws. Medeiros Merjan looked to steal a quick victory with a turn two Luminarch Ascension.

Damo da Rosa recycled the top of his library with a fetch, and then continued to dig with Explore, but had no way to attack as yet, letting Medeiros Merjan tick up to one, then two counters. The only likely attacker—a Raging Ravine on the next turn—was quickly blown away by Medeiros Merjan's Tectonic Edge. He passed, now down to three lands, and Damo da Rosa fired a Comet Storm at Medeiros Merjan's face to prevent further ascension that turn.

Damo da Rosa plonked down an Oracle of Mul Daya, which Medeiros Merjan tried to counter with Deprive, but off of his fifth land, Damo da Rosa had a Spell Pierce. Despite that, Damo da Rosa looked to be out of land and had to sit happily at five land to his opponent's three. 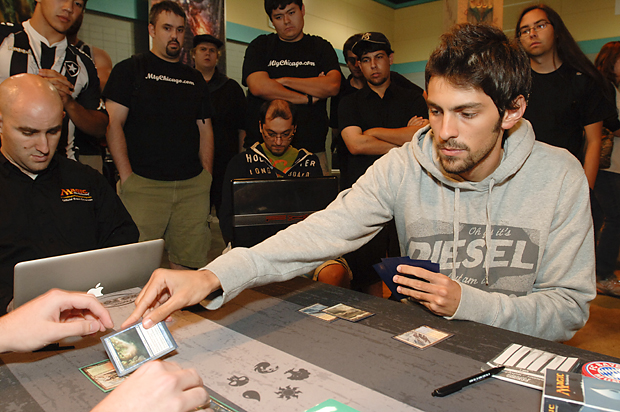 Paulo quickly outstripped that, jumping to seven lands, and his Oracle even got the beats on to prevent Luminarch Ascension from spooling up. He resolved a Jace as well, and continued to manipulate the cards on top for massive advantage.

Guilherme had a plan to counteract that, however: Gideon Jura. Gideon required the creatures to fight him next turn, opening a window for Guilherme's ascension to Luminarch status. Paulo was willing to play that game, attacking Gideon down to 6 loyalty and then summoning an Avenger of Zendikar and using the double land drop ability of Oracle to pump his seven Plant tokens to 2/3 each.

Medeiros Merjan untapped and surveyed the situation from the clouds with his Angels. He decided Damo da Rosa's team was unworthy, and called a Day of Judgment. Jace, believing himself to be above such a fate, was instead summarily judged by Gideon Jura's 6/6 might.

Paulo continued the haymakers with a hasty kicked Goblin Ruinblaster and a hasty Hellkite Charger, both sent Gideon's way to torch the unfortunate planeswalker. Guilherme, reasonably safe in his Luminarch's tower, did not cast more spells and passed it back.

Damo da Rosa searched for ways around the Ascension by digging with a Sphinx of Lost Truths and further disrupting Medeiros Merjan's mana base with a Goblin Ruinblaster, but two Angels stood in his way now. Next turn, he attacked into a now three-Angel chorus, which took down the Hellkite Charger and a Goblin Ruinblaster.

Paulo attempted another Sphinx but Guilherme was ready with a Deprive. Double Lotus Cobra only marginally increased the pressure, so the newly minted Luminarch decided to swing for 8, bringing the life totals to 8-11 in his favor—the previous 4 damage done to Paulo by his own fetch lands.

Of course, marginally increasing the pressure meant Paulo could swing with 13 power the next turn, after activating Raging Ravine. Guilherme made a single Angel to block the land and descended to 3, keeping up mana for counterMagic. When Paulo tried a game-ending Comet Storm on Guilherme's upkeep and it was Deprived in response, he conceded.

Medeiros Merjan mulliganed twice again on the draw at the start the third game, but he was first to visit the Halimar Depths. Damo da Rosa seemed to eschew manipulation for speed, dropping a turn two Lotus Cobra. When Medeiros Merjan just laid another tapped land, Sejiri Refuge, Damo da Rosa pondered what to do with all his potential mana.

He quickly decided to break a fetch and make a Jace. Guilherme had no response, so Paulo proceeded to Brainstorm. The Cobra cracked in to bring the life totals to 19-18 in Guilherme's favor. 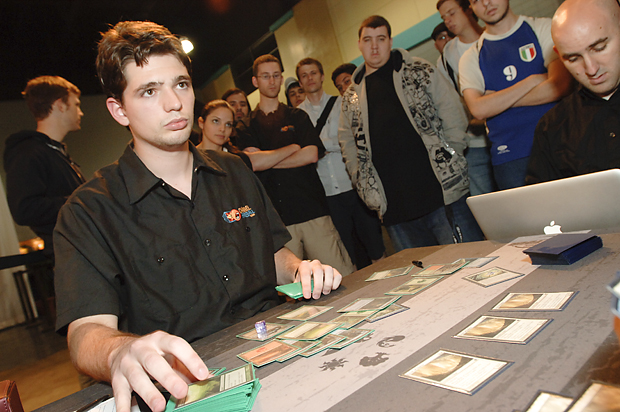 The Brazilians' match draws a big crowd, but then, Brazil's a big country.

Medeiros Merjan, now finally with two mana accessible, started his quest to Luminarch Ascension again. Damo da Rosa, with an active attacker and an active planeswalker, seemed far less concerned than last time. He made enough mana with another fetch to Explore and then kick a Mold Shambler and again cracked in for 2, evening the life totals at 17-17. Medeiros Merjan was able to counter a Goblin Ruinblaster with Deprive, but the additional cost was nearly as bad, putting Medeiros Merjan back at just one land. When he replayed his tapped Halimar Depths and then Damo da Rosa proceeded to destroy it as well, Medeiros Merjan's fate was sealed. It literally became sealed when Jace used his fateseal ability and left it on top. A few attacks and a handshake later, Paulo made his sixth Top 8.