ith one round left to go in the Swiss, the Top 8 of the Pro Tour had been decided. But this didn't mean that there wasn't still something to fight for. Plenty of players near the top of the tournament still had qualifications to earn and were fighting for those coveted spots in the Top 25.

That wasn't something that needed to bother either of these players. As a Hall of Famer, Jon Finkel has a free pass to every Pro Tour. His opponent, Owen Turtenwald, is a perennial top finisher, Platinum-level professional player, No. 16 ranked player, and sits as the current sixteenth-ranked player in the world. Qualifying for the Pro Tour is the farthest thing from their minds. That said, Pro Points still matter, especially if Turtenwald wants to retain his Platinum statue, or if either player has aspirations of returning to the World Championships this year.

This match was a textbook mirror match featuring one of the biggest decks of the tournament: Mono-Blue Devotion. Taking this tournament by storm, Thassa and her minions have absolutely dominated opponents all weekend long. The mirror match between these two decks has the potential to be one of the more interesting in Standard. The interplay between devotion and cards like Domestication, the race to Thassa, and the presence of Nightveil Specter each present opportunities from some very interesting interplay between these two top-level talents. 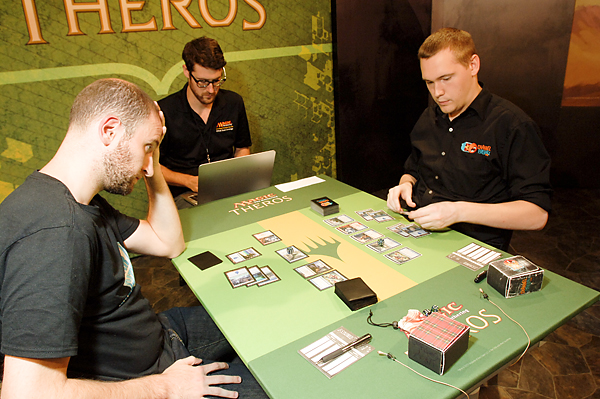 Jon Finkel and Owen Turtenwald both play out their final match in hopes of earning some important Pro Points for the season.

In this nearly identical mirror match, it would be the slight edges gained that would determine the eventual winner. Turtenwald was on the play, playing Cloudfin Raptor and immediately evolving it with Frostburn Weird. Finkel matched him card for card, staying true to the mirror aspect of this match. The first significant deviation came on turn three, when Turtenwald played Thassa, God of the Sea, while Finkel chose to play Nightveil Specter. Turtenwald's early Thassa became a creature when he added a Judge's Familiar to his team, and a Tidebinder Mage cleared the way for his God to attack. Though Finkel had chosen to wait a turn, he dropped a Thassa of his own on the fourth turn. Waiting allowed his God to hit the table as a creature, evolving his Cloudfin Raptor larger than Turtenwald's and giving him the edge.

Then, Turtenwald struck a powerful blow. With the devotion he had built up, Master of Waves came down alongside a whopping eight Elemental tokens. When Turtenwald sent his entire team at Finkel, the Hall of Famer lined up his blocks before resetting the Master of Waves with a Cyclonic Rift, effectively fogging the turn. 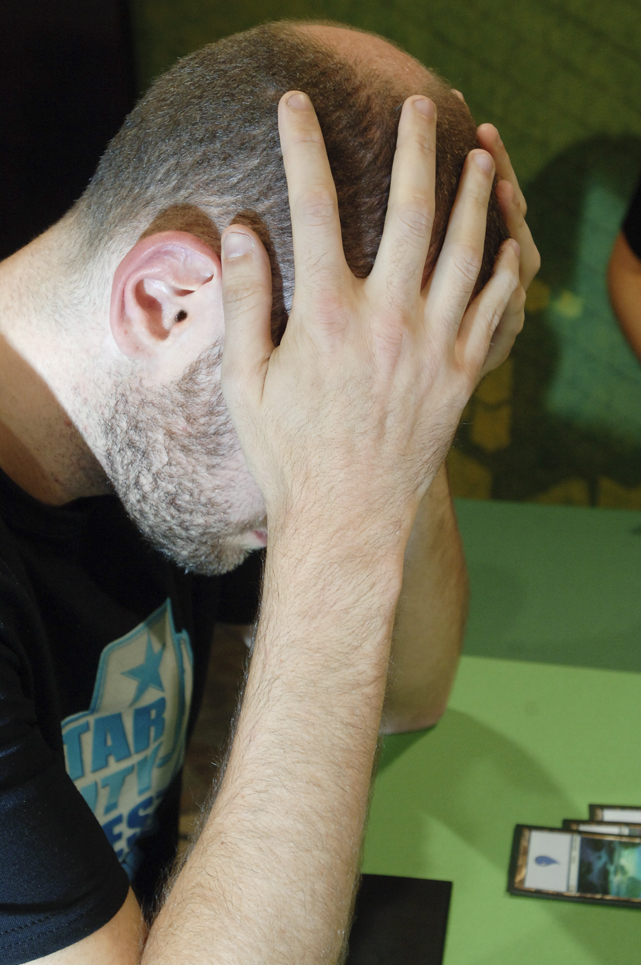 Finkel agonizes over the correct play in a difficult mirror match.

In almost a trademark pose, head in his hands, Finkel contemplated his turn. His pair of Nightveil Specters gave him a chance to steal something sweet from Turtenwald, but the one that got through simply hit a Tidebinder Mage. Finkel made his Thassa unblockable during the attack, too, dropping Turtenwald to 7. He ended his turn with two mana available, signaling that he had some trick (which he would have to) to survive the upcoming turn.

Now it was Turtenwald's turn to think. If Finkel had another removal spell on his turn, he would be able to weather the assault and finish Turtenwald off with unblockable creatures. He ended up making Thassa unblockable and sending everything but his two Cloudfin Raptors. A second Cyclonic Rift once again foiled the attack that was supposed to kill him. Turtenwald had nothing that could stop the unblockable Sea God coming his way on the next turn, and he conceded as soon as Finkel declared his attackers.

For the second game, Turtenwald began with a nice, curved opening: Cloudfin Raptor, Tidebinder Mage, and Nightveil Specter. Playing the Nightveil Specter caused Finkel to opt to Rapid Hybridization his own Judge's Familiar to block the attacking Tidebinder Mage, but, more importantly, evolve his Cloudfin Raptor to the point where it could survive combat with the Specter. It also, handily enough, gave him a 3/3 attacker that was the largest creature on the board, allowing him to begin attacking and leaving his mana up for other things. These other things included countering spells, such as the two copies of Jace, Architect of Thought, that Turtenwald attempted to cast. 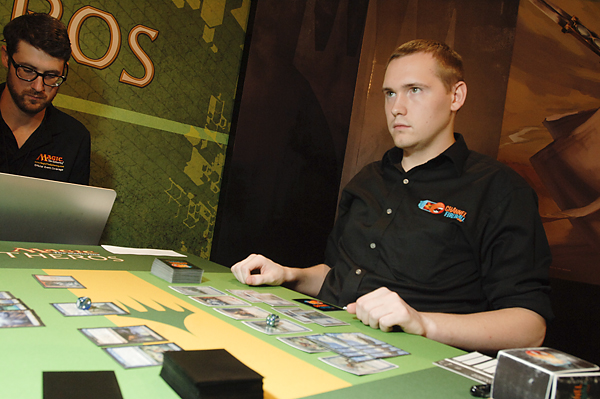 Turtenwald attempts to find an edge in the mirror match against his Team StarCityGames teammate.

While Turtenwald was trying to get ahead on the board, Finkel flexed his current advantage, sending his frog lizard over as a virtual Lightning Bolt every single turn. By the time that Turtenwald managed to get enough creatures on the board to potentially stop the attacks, Finkel had found a Thassa to negate that defense. Thassa's activated ability had already been given a workout over the course of this match, and Finkel used it one last time to finish things off. With Turtenwald at 5, Finkel scryed into his sixth land, allowing him to make Thassa, the 3/3 token, and his Cloudfin Raptor unblockable, ensuring that Turtenwald would die even if he held a Cyclonic Rift.