Round 16 Feature Match: Causing a Ratchet

Samuele Estratti was virtually unknown outside of Europe when he won Pro Tour Philadelphia just a few months ago. After his win, many players questioned whether that finish was just a fluke, or if Samuele Estratti was going to become a force to be reckoned with.

Well, after Samuele Estratti started this weekend with a 9-0 record (making some amazing plays and on-camera bluffs to get there) most players have been convinced that Estratti has what it takes to become a Pro Tour powerhouse.

But if he's going to earn his second Pro Tour Top 8, he's going to need to beat a player who nobody wants to face in order to get there. Paulo Vitor Damo da Rosa (PV), an all-time great who now finds himself within arm's reach of the ninth Pro Tour Top 8 of his career. 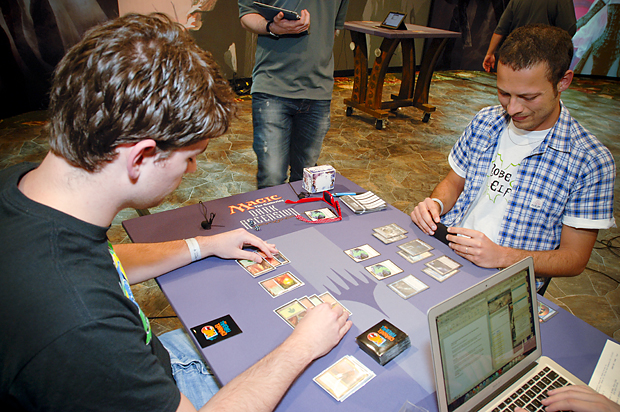 Samuele Estratti wants to prove that his Pro Tour win could be done again. Paulo Vitor Damo da Rosa wants to add a ninth Pro Tour Top 8 to his record. And in the final round, only one of these players will make their way onto the Sunday stage.

PV took a mulligan, but quickly put himself in the driver's seat with two Rampant Growths and a Galvanic Blast to deal with Estratti's Delver of Secrets.

With an abundance of mana at his disposal, PV decided that he could afford to play around Mana Leak, waiting until he got to seven lands to play his first threat of the game, a Huntmaster of the Fells.

A Midnight Haunting gave Estratti some pressure of his own, and a Gut Shot plus a Snapcaster Mage allowed the Pro Tour Philadelphia Champion to kill the Huntmaster and trade with the accompanying wolf token.

A second Huntmaster of the Fells got countered by Mana Leak plus Snapcaster Mage, and a Runechanter's Pike put Estratti a couple of turns away from flying to victory with his spirit tokens.

A ninth land off the top of his deck and an Inferno Titan (that PV could now resolve through Estratti's Mana Leak) changed all that. 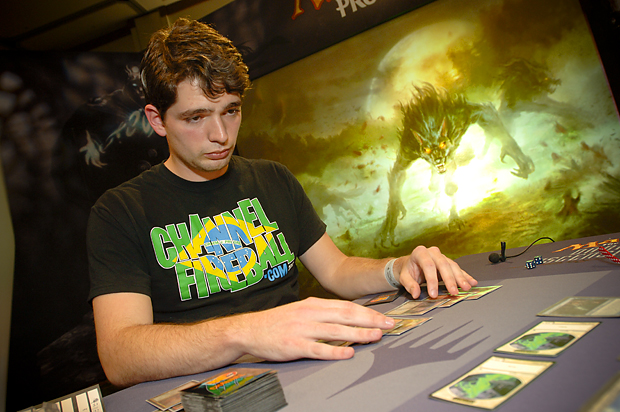 PV turns things around with an Inferno Titan.

Suddenly Estratti was left without any creatures on his side of the board, and an attack step later he found himself reaching for his sideboard.

Estratti's turn one Delver of Secrets transformed into an Insectile Aberration at the first opportunity possible, and PV found himself under a very real clock before he had even played his second land.

PV again spent his early turns accelerating with two copies of Rampant Growths, but without a Galvanic Blast, he could only sit and watch as Estratti's 3/2 flier hit him over and over again.

When he got to seven mana, PV tried for an Inferno Titan backed up by an Autumn's Veil, but Estratti was ready with a Mana Leak and a Negate.

Estratti's next attack left PV at 5 and forced the Brazilian Pro to pass a turn with no plays so that he would be able to block with an Inkmoth Nexus. Estratti didn't want to trade his 3/2 flier for PV's land that he could pump with a Kessig Wolf Run, so he passed his turn with no play as well.

Realizing that he needed to make a move fast, PV again tried to resolve an Inferno Titan, this time with three extra mana available that he could use to pay for a Mana Leak. 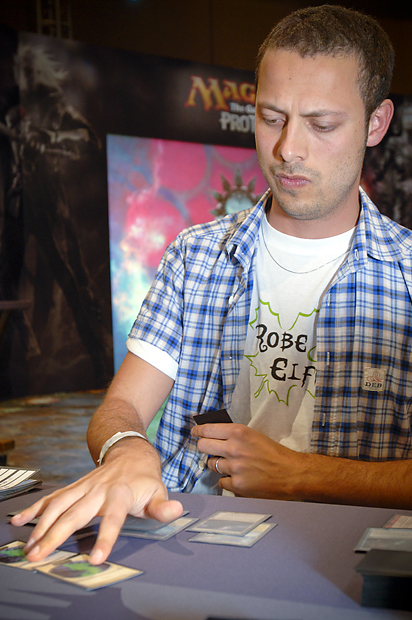 Estratti puts his opponent in a bind

Estratti did in fact Mana Leak the Inferno Titan, forcing PV to seriously think things over. After a bit of deliberation, PV, not wanting to die to a Moorland Haunt activation and a piece of equipment, decided not to pay for the Mana Leak, simply passing the turn ready to chump block with a Inkmoth Nexus.

A Vapor Snag cleared the way for an attack that left PV on 1, and when Estratti used a Snapcaster Mage to flashback his Vapor Snag a turn later, the players were off to a deciding third game.

Estratti once again opened on Delver of Secrets, but this time PV was ready with a Galvanic Blast.

Midnight Haunting gave Estratti something of a clock, but a Thrun, the Last Troll and a Slagstorm later, Estratti could feel the match slipping away from him.

Estratti stuck around for a few more turns, but he failed to draw anything that would let him overcome PV's army (let alone deal with the many titans that were sitting in his hand).

A shake of the hand later, and Paulo Vitor Damo da Rosa had advanced to his 9th Pro Tour Top 8!