Round 16 Feature Match: Dancing with Werewolves

With only one round to play, I once again found myself sitting in the Feature Match area alongside Naoki Shimizu. Again, with a massive smile on his face, he walked over to me and shook my hand, "Nice to see you again," he said to me. This time, it wasn't an idol he was facing down, as in his earlier match against Jon Finkel, but elimination. This was the "make or break" moment for him and his opponent, Stanislav Cifka. The winner of this match would make Top 8, and the other would have to cheer from the sidelines.

Speaking of cheering from the sidelines, Cifka had a recognizable cheerleader peering at his match over the ropes. Martin Juza perched ten feet away, intent on the outcome of his countryman's match. He told me how torturing this day had been for him. Currently leading both the European Region sweepstakes for the Players Championship as well as the Czech nomination for the World Magic Cup, but out of the Pro Tour, there were three other Czech players who were capable of overthrowing him in the final stretch. "I hate this! I don't want to root against my friends, but I also really want to go to those events. This sucks. But it's great." 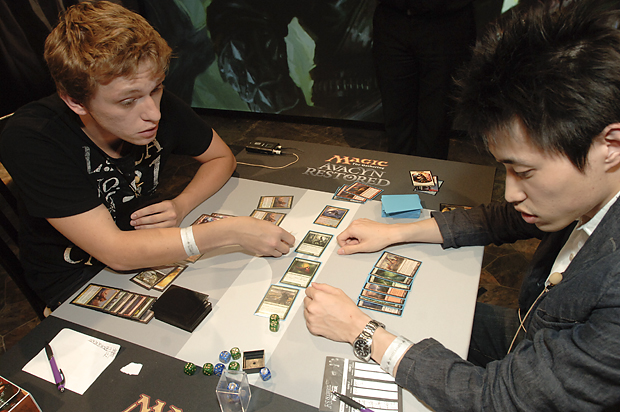 Both Stanislav Cifka and Naoki Shimizu were playing for a chance at the Top 8 in the deciding round of the swiss.

Shimizu was the first on the board, as his Wolves and Angels deck tends to be. An Avacyn's Pilgrim hit play on the first turn, but Shimizu had nothing for it to ramp into, merely attacking for 1 on the next turn. Cifka hit a trio of lands when he attempted to fill his Reanimator deck's graveyard with a Mulch, milling only a Faithless Looting into his graveyard. He didn't even end up discarding anything other than lands when he found himself at nine cards thanks to the glut of lands.

Shimizu began building his force with a Huntmaster of the Fells on the next turn. He was going to have to make short work of Cifka if he was going to avoid having victory snatched from him with a turn-five Unburial Rites. Cifka began throwing up defenses with a Borderland Ranger, fetching a Swamp from his deck. The 2/2 gave Shimizu some pause on the following turn, as he decided whether or not to attack. Ultimately, he chose to pass and let his Huntmaster flip, the Ravager of the Fells taking care of the Borderland Ranger on Cifka's side. In its place, Cifka made a Huntmaster of his own, once again causing Shimizu to contemplate before sending his Ravager in to potentially die. 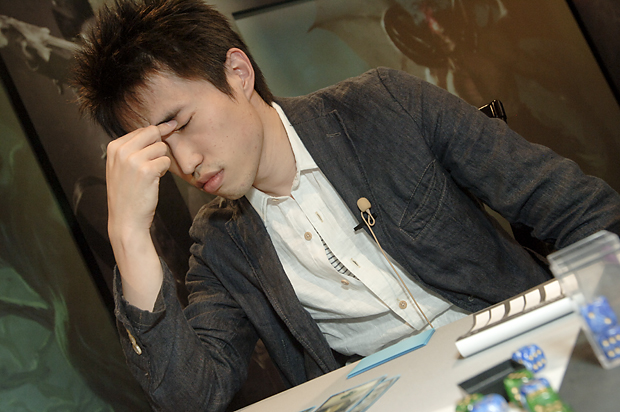 The pressure of this match must be intense.

Eventually, Shimizu decided to take the offensive straight to Cifka, using a Brimstone Volley to burn Cifka for 3 at the end of Cifka's turn before deciding to send his team in. He did so in order to prevent having to flip his Ravager back down after he cast a second creature (a Scorned Villager) on his turn. He attacked in, and wolves traded, as Cifka took 4 down to 10. A second Huntmaster from Cifka took him back up to 12 and clogged the lane a bit, making combat difficult. Fortunately for Shimizu, he had a Kessig Wolf Run on his side, which would make combat great for him. Unfortunately, to do so would use most of his mana and allow Cifka's Huntmasters to flip. Despite this, Shimizu chose to attack with his Ravager. Cifka double blocked with the Wolf and one Huntmaster, and Shimizu forced a two-for-one by burning off one blocker with a Brimstone Volley.

If you guessed that Cifka's next card would be another Huntmaster of the Fells, you are just about as lucky as he was, and just about as happy to hear me say that as he was to play it. Undeterred, Shimizu simply played a Wolfir Avenger at the end of his turn and untapped to attack. He led with a Gavony Township before sending his entire team, all four creatures. This time, it was Cifka's turn to ponder, lining up blockers and then taking them away as he tried to plan the best course of action. He was at 12 and had three blockers, including two Huntmasters. He ultimately decided to block the Avenger with his Wolf and keep the Huntmasters at home. Shimizu used his Township to boost his team, dropping Cifka to 3. Shimizu passed the turn.

Then things got interesting. Cifka untapped and pointed at his two Huntmasters, as he began to transform them. Then, as he was doing this, he began to point at the creatures of Shimizu's that he wanted to target, starting with the Scorned Villager, which Shimizu picked up and began to flip, saying "transform" as he did so. At this point, the judge intervened and informed Shimizu that he had missed the trigger since Cifka was choosing targets, which relegates Shimizu's trigger to the bottom of the stack, which would result in his Villager transforming after Cifka's Werewolves, not before, as would happen normally. Shimizu called for the Head Judge. After conferring with the table judge and both players, the Head Judge decided that Shimizu had been given plenty of opportunity to stop his opponent from progressing to the point he had and upheld the judge's ruling. Cifka's two Huntmasters flipped and killed Shimizu's Villager and his Pilgrim, leaving him just a Ravager of the Fells and a Wolfir Avenger in play to Cifka's two Ravagers.

And then, just when things looked worst for Shimizu, Cifka sealed his own fate. He cast Sever the Bloodline to kill Shimizu's Ravager of the Fells. Shimizu picked up his Ravager and removed it before calmly reminding Cifka that Sever the Bloodline removes all creatures with the same name from the game, regardless of controller. In shock, Cifka picked his only creatures up slowly before just continuing to pick up the remainder of his cards in concession. 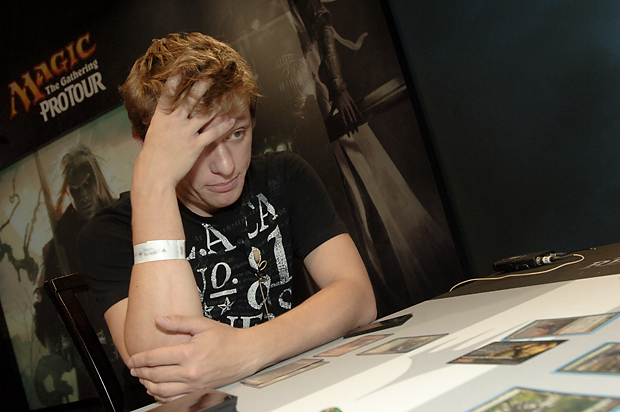 A brutal mistake costs Cifka the first game of an important match.

A very strange pair of mistakes first takes a sure victory away from Shimizu before handing it right back less than a minute later. With the Top 8 of a Pro Tour on the line, nerves can get to even the best players.

Both players kept their opening hands for the second game, and Cifka started on the play. He began by Mulching a pair of Huntmasters into his graveyard, netting himself a Mountain in the process. On the other side, while Shimizu hadn't found a first-turn Avacyn's Pilgrim, he did have a second-turn Scorned Villager. Understanding how the deck works, Cifka wisely wasted no time in using Pillar of Flame to remove the mana producer. He found himself a pair of lands, including a Clifftop Retreat, on another Mulch, sending Borderland Ranger and Devil's Play to the graveyard.

It looked like the damage from Cifka's Pillar had been done when Shimizu passed his third turn with no play, but when he cast a Wolfir Avenger in Cifka's next end step, it became clear that his draw wasn't completely neutered. He added a Borderland Ranger to his side, as well as a Grafdigger's Cage, a back-breaking card for Cifka. Despite the obvious hindrance of the Cage, Cifka continued on, looking for another route. He used Sever the Bloodline to remove the Avenger, but Shimizu just replaced it with a Huntmaster of the Fells. Cifka matched it with a gold card of his own: the legendary Olivia Voldaren. Shimizu's deck had numerous ways to deal with Ms. Fancypants, but if he didn't have one, things were going to turn south for him in a hurry.

Shimizu untapped and drew a card, giving him four in hand. He found a Gavony Township, which could hurt his cause as much as help it in this case. After a serious amount of thought, Shimizu sent his whole team in. Cifka wavered on his blocks before ultimately deciding to go with the Ranger, knowing he could use the two mana he had remaining to ping something and pump Olivia should Shimizu use his Township. Instead, Shimizu let it die and used Bonfire of the Damned for two to safely kill Olivia. At the end of turn, Cifka put the game back in control, using Human Frailty to kill the Huntmaster of the Fells, leaving Shimizu only a wolf token on his side. A Devil's Play took care of that, and the game was set back to zero, with each player sitting on two cards in hand.

Shimizu was the first to break the silence, using Cifka's end step to make a Wolfir Avenger. It got a bit larger with the Township, smashing Cifka down to a lethal 3. Cifka drew his card and then conceded, sending Naoki Shimizu into the Top 8 of Pro Tour Avacyn Restored, where a rematch with Jon Finkel possibly awaited him!

4 Huntmaster of the Fells 2 Gisela, Blade of Goldnight 2 Griselbrand 2 Sigarda, Host of Herons 2 Olivia Voldaren 2 Bonfire of the Damned
75 Cards