Round 16: Free Passes to the Gun Show

As has become a Worlds tradition for Katsuhiro Mori, when the pressure is on, his shirt comes off. Clad in his sequined tank top (scout's honor) and equally baffling pants, Mori was offering free passes to the Gun Show. Just one more win and he'd have his third consecutive Worlds Top 8. Standing in his way, perhaps even more hungry for the win, was Germany's Jim Herold, Pro Tour–Geneva Top 8er. He was piloting Cephalid Breakfast and had managed 3-1. Mori was in the same boat with Tomb Stompy, a blue-black-white disruption deck that could race out fast Tombstalkers. They shuffled up. 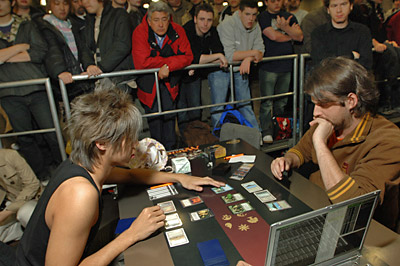 Katsuhiro Mori and Jim Herold face off with decks as different as their tastes in fashion. Herold got off to a bad start, seeing two bad hands and being forced to mulligan to five. Mori moved to further punish his handsize with Thoughtseize, but Herold had Brainstorm to hide away another Brainstorm and Tarmogoyf. Mori took Cabal Therapy and left him With Narcomoeba and lands. He untapped and played his 3/4 Tarmogoyf. Mori Brainstormed and shuffled with Polluted Delta, taking it on the chin for the time being.

Herold's Flooded Strand and Brainstorm kept him in goodies. He was faced with keeping two of Tarmogoyf, Force of Will, Cephalid Illusionist and Stern Proctor, He chose Cephalid Illusionist and Goyf, and played the latter. Mori did another round of Brainstorm and shuffle, but this time when he untapped he was ready with a big play. Tombstalker at a steep discount, clearing his own graveyard, and a Tormod's Crypt in case Herold got any ideas.

Herold was forced to sit back on his Goyfs for the time being, and played his Illusionist. Mori shut him down with Engineered Plague on Wizard. He shrugged and found a third Tarmogoyf, just waiting for a chance to get past the demon. Mori played a Trinket Mage for Engineered Explosives, but chose not to crack his lands and play it right away. Herold got rid of it with the flashed-back Cabal Therapy, sending a Nomads en-Kor to the bin. Mori revealed that he had another waiting in hand, along with Thoughtseize.

Mori untapped, and this time he did not wait. Engineered Explosives for two resolved. A turn later Herold's board was gone, and the Demon made sure he didn't have to endure it long.

Herold had to pass on another one-lander, but this time was spared the indignity of five. He opened with Aether Vial. Thoughtseize from Mori revealed Worldly Tutor, Cephalid Illusionist, Force of Will, and a land, with no source of green. Mori stole the Illusionist.

Herold ripped a Thoughtseize of his own off the top, and caught Mori with a hand of three Engineered Plagues, lands, and a lone Brainstorm. Herold left him with the Plagues. One came down the following turn on Wizards. Herold drew and passed on his two land. Mori tried a second, and it too was allowed, this one for Soldiers.

Herold finally found land number three, a Tropical Island. He stared at a mitt of Illusionist, Brainstorm, Dread Return, Force of Will, Worldly Tutor and Stern Proctor, and chose to Brainstorm, turning up Abeyance, Cabal Therapy and Nomads en-Kor. He put back Abeyance and Dread Return. He Therapied, naming Engineered Plague. Mori was left with just Swords to Plowshares in his hand.

So the plan was this: With a little shucking and jiving and enough mana, he could make a window to go off by bouncing the Plague on Wizards with Stern Proctor, flashback Cabal Therapy to get rid of Swords to Plowshares, and provided he had a Shaman en-Kor, combo Mori out.

Now it was Mori's turn to pluck, a Sensei's Divining Top to go with his Flooded Strand on board. Herold thought, and allowed it. Mori rigged the top three and passed it back. Herold tutored up Shaman en-Kor, untapped, incremented his Aether Vial to 2, and passed it back. Mori paused before untapping, mentally checking that his top card (Enlightened Tutor) was still what he wanted. It was.

He drew it, rigged again, and this time swapped the Top for the newly-found Trinket Mage. He tried the Mage, and it was allowed. He got Pithing Needle. That finally convinced Herold to gave up his Illusionist to Force of Will. Now he needed to find a replacement Illusionist. He made no play on his turn. Mori's Enlightened Tutor got him Engineered Explosives on his upkeep. He played it for two, and swung. Herold was down to 15, and had yet another obstacle to overcome.

They played draw-go for a couple turns, Mori whittling Herold down with his Mage. Mori found a Leyline of the Void, and now the noose was drawn tight. A few more attacks and he had secured his third consecutive Worlds Top 8.