On any stage other than the Top 8, the pressure doesn't ratchet up much higher than this. With six of the Top 8 spots already locked in, there was a scrum of 33-pointers aiming to secure a Top 16 or, if tie breakers fell their way, the Top 8.

There was some discussion of a draw prior to the match, involving some complicated math that Mann said put his Top 8 percentage with a win at about 30 percent and Shenhar at 10 percent, but ultimately the pair opted to hash it out on the battlefield.

Even nearby David Shiels piped in to encourage them to play it out.

"You're Top 25 with a loss? Top 16 with a draw and an outside shot at the Top 8 with a win? Yeah, you've got to play," Shiels shouted across the feature match area. "First place is 25 points!"

And it's true. The reward for making the Top 8 was substantial. Shenhar, who came into Pro Tour Gatecrash with 29 Pro Points, had his eye on the World Magic Cup and making platinum. He had positioned himself well this weekend, running over players left and right with his version of Saito Gruul, an aggressive deck capable of some of the most explosive starts in the format.

Mann, meanwhile, was playing the Canadian Midrange Jund deck that had served so many players well this weekend. He had a sneaky amount of life-gain between Vampire Nighthawk, Huntmaster of the Fells and Thragtusk, plus a plethora of removal. If he could survive Shenhar's early onslaught, his chances at a win looked pretty good. 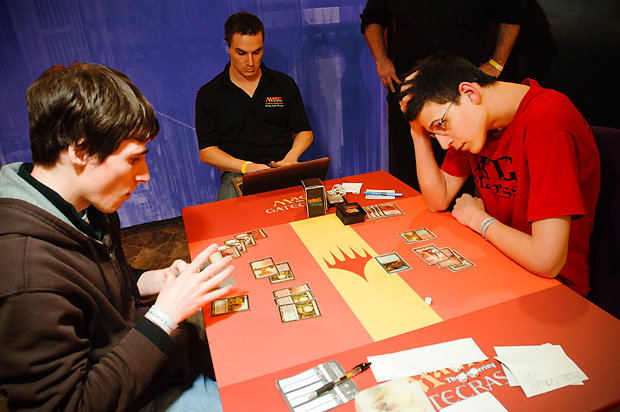 Stephan Mann and Shehar Shenhar's odds for a Top 8 were slim, but when there's a possibility, you've got to go for it!

His chances at the Top 8? Well, if Zvi Mowshowitz puts him at 30 percent, you have to like those odds...

As Shenhar has done all weekend, his fast Gruul deck started off with an aggressive draw, even after going to five cards. He started on Stromkirk Noble and two Rakdos Cacklers, while Mann fixed his mana base and accelerated with Farseek.

However, Shahar's parade of 2/2s was stopped cold by Vampire Nighthawk followed by an Olivia Voldaren, all while Shenhar was stuck on just one land.

Quickly facing an unmanageable board state and still without his second land, Shenhar simply scooped up his pile of outclassed 2/2s and chose to move onto the second game rather than draw it out any longer.

Unfortunately for Shenhar, the odds looked pretty long from his side of the table as, once again, he was forced to go down to five cards while Mann kept his seven.

He started quickly again, with a Rakdos Cackler into Ash Zealots on successive turns, one of the deck's best starts. But Mann blunted his aggression with a Mizzium Mortars and Dreadbore on the Zealots to try and keep his head above water till his more powerful cards could come online.

But Shenhar kept on coming. Two Flinthoof Boars helped put Mann to just 2 life before he could try and stabilize with a Dreadbore into a Huntmaster of the Fells. Even then he was precariously at just 4.

Shaking his head, Shenhar played a Lightning Mauler and immediately paired it to attack Mann down to just 1 life, trading both halves of his Huntmaster of the Fells away.

A Thragtusk here would have been devastating, as Shahar was out of cards, but all he could muster was a Victim of Night to kill the Boar.

But even Olivia didn't matter, as Shahar eventually drew Searing Spear before Mann could find any life game.

"I can't believe I lost that game," Mann said, motioning toward the plethora of removal in his graveyard.

"And I went to 5 too," Shenhar said, exhaling a little bit now that his Top 8 odds were still live, no matter how slim or robust they might be.

Already Shenhar was off to a better start, getting to keep his initial seven cards for the first time in the match. And while he started off with a Rados Cackler and Ash Zealot, Mann got busy on his mana with a turn two Farseek.

That Farseek yielded a windfall, as Barter in Blood cleared Shenhar's side of the board and let him follow up with a Thragtusk.

Shenhar, meanwhile, was once again short on land, missing his third land drop, but managing to put a Volcanic Strength on a Lightning Mauler to try and put a dent in Mann's life total again. 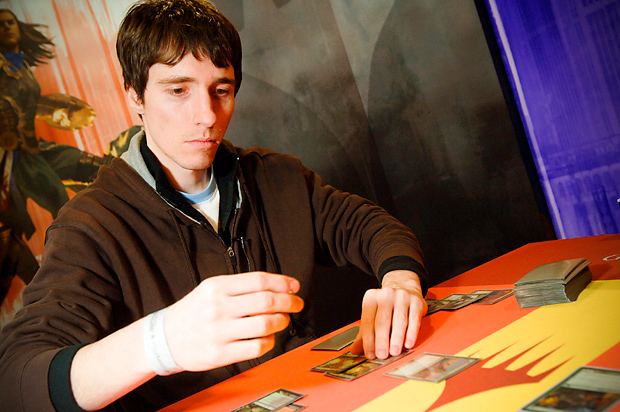 Mann's Jund deck puts up a fight, as he chases his chance for a Pro Tour Top 8 finish.

But the one attack only amounted to a small dent, as Victim of Night saved some life and netted Mann some more breathing room. Once again Shenhar was back to an empty board.

Olivia Voldaren made a brief appearance, but was quickly downed by a Searing Spear, but it didn't seem to matter all that much. By this point, Mann had a ton of mana and a Kessig Wolf Run. An attack put Shenhar to 2 life and threatened to end things quickly. Shenhar fought back with a Searing Spear and the land to give his newly played Boros Reckoner first strike, but a freshly drawn Abrupt Decay let Mann slip through and secure a puncher's chance at the Top 8.