Round 16: History in the Making

Levy and Chih-Hsang Chang were in the same situation, the phrase "Win and In" would best describe what the two players needed. Both had 33 points and top tiebreakers going into the round. While only a few 36-point players would be making the Top 8, both of them were virtually assured of a Top 8 finish with a win in this, the final round.

Had the match been determined solely on paper, Levy would win hands down. The Frenchman has 238 lifetime Pro Points. A Top 8 here would put him tied with Bob Maher, Jr. at sixth on that list. Already this weekend he had passed Kamiel Cornelissen, Ben Rubin, Justin Gary and Gary Wise … not a list to scoff at for sure. 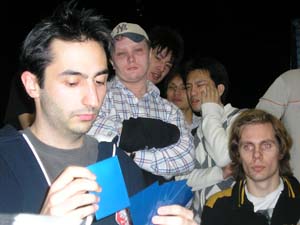 A crowd gathered around Levy for this make-or-break match.

Levy has nearly ten times the lifetime points of Chang, who had a mere 24. Chang had built his Red Deck Wins deck days before the tournament. If he won, he would be the first player from Taiwan to ever make a Pro Tour Top 8.

Chang won the roll. Levy needed to send back his opening hand. He sent back his second hand as well. He had double Forest, double Chrome Mox, Call of the Herd, Duress.

Everyone knew what Levy was thinking; with Top 8 on the line. The timing of a double mulligan couldn't have been worse.

Change led off with a Frostling. Levy played out a first-turn Dark Confidant. The Confidant wasn't long for the world as Chang used a Lava Dart to kill it and then played a Genju of the Spires.

Levy used a Cabal Therapy and named Lightning Helix. Chang revealed Grim Lavamancer, Slith Firewalker and Blinkmoth Nexus. To make matters worse for Levy, he didn't have a third land to play out against Chang.

Without a mana source, Levy had his back to the wall. Chang first hit Levy for 7 with the Genju and Frostling. The next turn Chang Pillaged Levy's Chrome Mox. Levy had no options left and died shortly after.

Levy began Game 2 with Birds of Paradise. Would the Birds live?

No, as Chang hit them with a Firebolt. Levy tried again on the second turn with a Llanowar Elf. The Elf got hit on the head by a Frostling. Turn three saw Levy without a land but he decided to place out a newly drawn Chrome Mox, removing Call of the Herd from the game. Then he placed out a Hypnotic Specter. 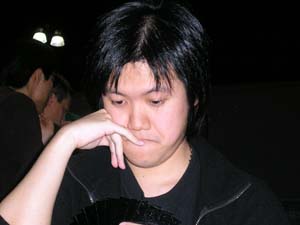 Chang aimed to be the first player from Taiwan to make Top 8.

Chang killed the Specter with a Magma Jet and placed one card on the bottom and the other on top. Levy played a Call of the Herd. Chang Pillaged Levy's Mox to keep him off flashback mana for the Call.

All Chang did on his next turn was to attack with a Blinkmoth Nexus. Levy found a third land and a new Chrome Mox. The Mox was imprinted with Engineered Plague. This allowed Levy to flashback Call of the Herd.

One of the elephants met their demise from a Lightning Helix but the other continued to swing past a Blinkmoth Nexus. A second Nexus joined the team to pump the first as Chang started to throw burn directly at Levy. Levy showed no fear and dropped down a Dark Confidant.

Levy used a Putrefy on a Blinkmoth Nexus to protect his life total. He was on 7. When Levy flipped up an Engineered Plague from the Dark Confidant, Chang said, "Wait," and showed Levy a Char to make Pro Tour history with Taiwan's first player in a Top 8.