"As soon as I heard them call my name for a feature match, I knew it couldn't be good," Luis Scott-Vargas said as he moped into the arena, but he brightened as he saw his opponent for the round. "If I had to battle somebody, at least it's someone I like," he announced, as he reached to shake Paul Rietzl's hand. Only one of them could make the Top 8, and both of them knew it.

Rietzl started things off quickly, getting in for four off of a first-turn Steppe Lynx before adding a Squadron Hawk to his board, searching up the other three. Scott-Vargas grabbed himself a Sylvok Lifestaff with his Stoneforge Mystic. The life gain from the Equipment could prove crucial in this matchup. 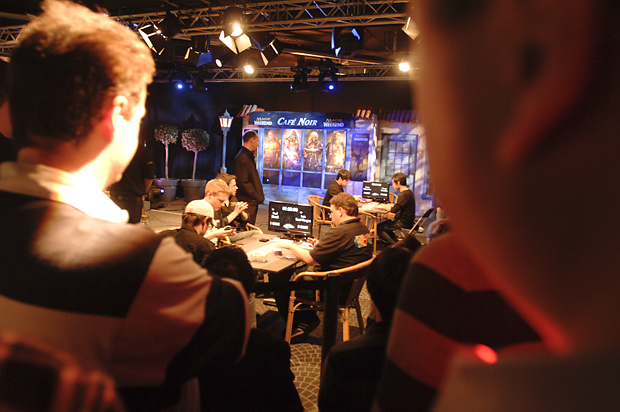 All eyes are on Paul Rietzl and Luis Scott-Vargas in the feature match arena.

Rietzl thought hard about his attack in the following turn. He played a Marsh Flats and attacked with his Hawk and Lynx. After much deliberation, he decided to just go for 3, dropping Scott-Vargas to 13. His decision became clearer after he played a second Lynx after combat. Scott-Vargas drew his card for the turn and went to pass the turn. Rietzl showed him the third fetch land in his hand to pump his creatures for exactly lethal.

The first game only lasted until the fourth turn, and took a scant eight minutes off the clock.

"I needed that fast one," Rietzl commented. "I drew against White-Blue in round one."

"I've beat Boros twice in the tournament already. I think I've used all of my 'run goods,'" Scott-Vargas sighed.

Rietzl's draw was a bit slower in the second game. Instead of a Steppe Lynx, a Spikeshot Elder was all he could muster on his first turn. Scott-Vargas just played land number two and passed the turn. Rietzl's second turn spiced things up. An Adventuring Gear and a Steppe Lynx threatened to get out of hand quickly, but Scott-Vargas had an Oust for the Lynx. He also had the first of what was sure to be a long string of Squadron Hawks. 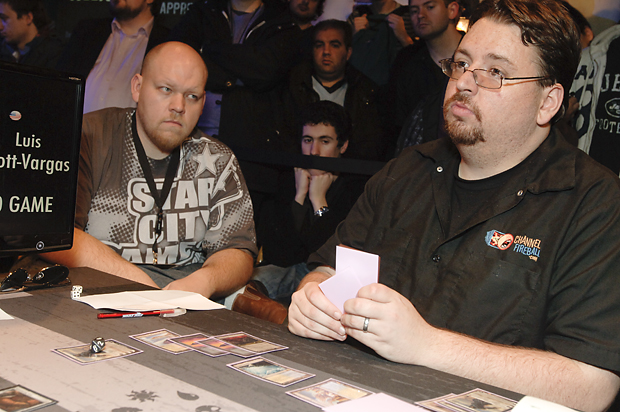 Hey! Hey! LSV! How many Squadron Hawks will there be?

Rietzl equipped his Spikeshot Elder and attacked. Before blockers, he used a Lightning Bolt to push the Hawk out of the way and sacrificed his Evolving Wilds to get a Mountain. Scott-Vargas dropped to fourteen. He put up a wall of two Squadron Hawks on the following turn, which Rietzl was more than happy to attack his creature into. After some deliberation, Rietzl passed the turn after his attack, leaving three mana and an Evolving Wilds up.

Scott-Vargas forced him to think about using his mana on the next turn. Gideon Jura hit the table, aiming his second ability straight at the Elder. In response, Rietzl used his Evolving Wilds and pinged Gideon with the now-3/3 Elder. After untapping, Rietzl used an Arc Trail to finish both Gideon and Scott-Vargas's last Hawk off. He then replenished his hand with a Squadron Hawk of his own. A second Gideon Jura from Scott-Vargas made sure that Hawk was flying straight at him, which gave Rietzl some pause. He ended up equipping his Hawk, playing a land, and attacking Gideon. When he finished his turn by dropping two more Hawks, Scott-Vargas pounced.

Day of Judgment swept the board, leaving a void into which Scott-Vargas slipped a lone Squadron Hawk. He opted to add some more counters to Gideon Jura rather than attack, bringin it up to seven loyalty. Rietzl stemmed the bleeding by using Arc Trail to drop Gideon to five and kill the Hawk. He then cast his last Hawk and equipped it. That, too, would die, as Scott-Vargas animated Gideon and handed him a freshly cast Sword of Feast or Famine. 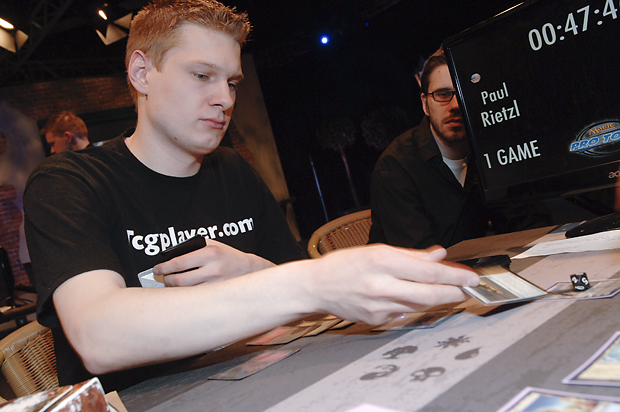 Rietzl had some thinking to do. Scott-Vargas had one card in hand and a dominating board position. He debated whether or not the card in Scott-Vargas's hand was a Mana Leak. After deciding no (or that it didn't matter at this point), he ran a Hero of Oxid Ridge onto the battlefield, equipped it, played a land, and dropped Gideon to one. Scott-Vargas took it all in stride. He simply untapped and played an Elspeth Tirel. She made a few Soldier tokens, creating a barrier between Rietzl and the marauding Gideon. Jura picked up the Sword and attacked the vulnerable Rietzl. That untapped all of Scott-Vargas's lands, including a Celestial Colonnade, giving him yet one more layer of defense. It didn't take too much more for Rietzl to concede that game.

"I don't know if I can win this on the draw," Scott-Vargas mused. "Both of my other Game 3s have been on the play, and they've still been close."

Rietzl actually started the third game in the tank. He had no first-turn play, but decided to keep the hand. He had to run an Evolving Wilds out on his first turn, fetching the Mountain that enabled his second-turn Plated Geopede. Meanwhile, Scott-Vargas spent his time casting a couple copies of Preordain. On the third turn, Rietzl exploded. An Adventuring Gear hit and jumped onto the Geopede. An Arid Mesa powered up the Geopede and fetched a Mountain for a Goblin Guide. Scott-Vargas was on 9 before he'd even played his third land. He had a Stoneforger Mystic to fetch the incredibly important Sylvok Lifestaff. Before he had even set his deck down, Rietzl flashed the hasty Hero of Oxid Ridge that would deal the final blow on the following turn. Always the classy gentleman, Scott-Vargas conceded, putting Paul Rietzl into the Top 8!

"I was really sketchy about keeping that hand," Rietzl admitted after the match. It contained the Plated Geopede, Goblin Guide, and Hero of Oxid Ridge that he showed in the game, but his only lands were the Evolving Wilds and some Plains. Drawing two fetch lands in a row took his hand from a bit of a slow developer into an absolute monster.

"I wasn't too sure at first. I figured he might have time to set up with that draw, but when I saw the Arid Mesa, the hand became unbeatable."