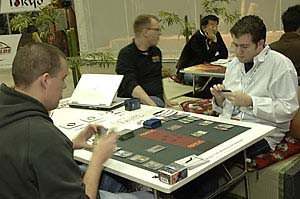 U.S. loyalties were torn in Round 16.

two players get to battle consistently in playtesting back in the New York area, but it's rare that they would face each other with so much on the line. If I read the standings correctly, both of these men have to win out in order to have a shot at the Top 8, and Jon Sonne needs to keep racking up wins to help keep the U.S. at the top of the leaderboard for Saturday's Team Rochester action.

Josh Ravitz is playing full on Rift/Slide powered by Life from the Loam for this event, while Sonne is playing Dredgatog, a very different sort of deck from the Goblins deck he won the Legacy Grand Prix with three weeks ago.

Ravitz won the die roll and kicked off the spell slinging with a turn-two Farseek for Sacred Foundry. A cycled Krosan Tusker during his next mainphase gave him land number four to Sonne's two on the board as the control match settled in. The "land, go" war continued with Ravitz clearly winning, displaying his gorgeous guru mana base for all to see, but the art exhibition was interrupted by the introduction of Psychatog from Mr. Sonne. Lightning Rift from Ravitz resolved right behind the Tog and suddenly the game was interesting. The Eternal Witness that followed the Rift, however, was countered.

Sonne literally took 10 minutes for his next series of plays, finally attacking for 11 to drop Ravitz to 9, but leaving himself tapped out. Ravitz then resolved Astral Slide and then cycled at the end of his turn, keeping the Tog out of play through Sonne's turn while Rifting him in the process. 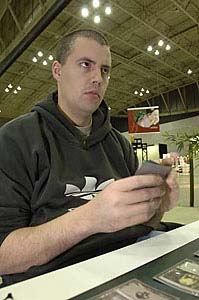 Sonne didn't go catatonic during the match, it just seemed that way once or twice.

Sonne cast Life from the Loam on his turn, grabbing some lands and then passing the turn back. Ravitz threw a second Lightning Rift onto the board, daring Sonne to counter it with his two open lands, but tapping him out of red mana for the only cycling card in his hand, a Forgotten Cave. This was clearly a dangerous gambit, should Sonne choose to push the issue and attack next turn for the full boat, even though Ravitz had four open mana available.

Sonne chose to attack only for four, dropping Ravitz to 7 life (he cycled a Renewed Faith earlier). The New Jersey native then tried to seal the deal by casting Pernicious Deed, ready to wipe out whatever advantage Ravitz had on the board, though the Tog would have to go to get rid of the Deed.

Ravitz had no action on the next turn outside of a Sakura-Tribe Elder, which disappeared under the gloom of a Darkblast before Ravitz could block the Tog with it the next turn. Sonne now took a chance with his attack and pumped the Tog for seven only to see it Slide out without dealing any damage, taking four to the nug. Sonne then blew the Deed, getting his Tog back at the end of turn. Ravitz used Eternal Witness to get back Astral Slide and then Wrathed the Tog away, not a great plan since Genesis was already in Sonne's enormous graveyard, but absolutely necessary. Sonne now had no action at all, very little hand, and soon had to deal with Astral Slide and Eternal Witness again.

Sonne was able to dig in order to find Meloku and managed to Blast away the Witness this time, but Ravitz now had another Rift to go along with his Slide and finally found the engine he was looking for. One more untap step and Sonne was dead with 24 minutes left in the round.

The second game started with a cordial warning from Ravitz about the pace of the game.

"Jon, I understand you are tired but you just have to play faster," Ravitz said. "I'll get the judge if I have to." 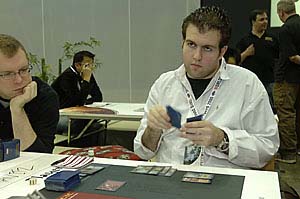 Ravitz turned up the heat with Lighting Rift.

Ravitz resolved a turn-three Rift to kick off Game 2. Sonne once again responded with Dr. Teeth, and Ravitz Boiled away his only Island to keep Jon off blue mana, though Sonne had another Polluted Delta on the next turn. A Krosan Tusker cycle made Sonne discard Genesis to make sure his Tog lived.

The game now became a race, both of damage and against the clock for Sonne, since he needed to win just to eek out a draw and an extra point for the U.S. National team. Gifts Ungiven from Sonne found Meloku and Counterspell for his hand plus Naturalize and Circular Logic for his graveyard, while a second Boil from Ravitz once again played Stone Rain on one of Sonne's blue sources.

With Sonne tapped out, Ravitz was able to resolve a second Lightning Rift, cycling Renewed Faith and targeting the Tog twice with the Rifts, forcing Sonne to either lose a bunch of cards to keep the Tog alive at no cost to Ravitz or just watch it die instead.

Sonne chose to let it die, then cast another Tog on his turn. Eternal Witness gave Ravitz back another cycler and the whole process was repeated. Finally all the Togs were cleared from the board and Ravitz began chucking cycled burn directly at Jon's skull. Decree of Justice increased the volume of pressure to 11 and Sonne capitulated mere turns later.