Round 16: Kai Budde vs. Sasha Zorc 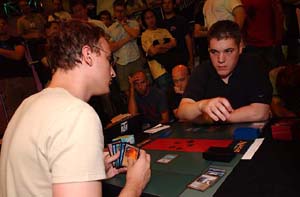 Sasha Zorc is a Croatian player who had a Grand Prix Top 8 back at Milano. He's playing Mind's Desire, while Budde is running black-blue Reanimator. Both players estimate that they need at least 2-1 to have a chance at Top 8, pending tiebreakers.

Budde mulliganed his opening hand. He played Brainstorm on Zorc's end step, then used Entomb on upkeep to get Nether Spirit. Vampiric Tutor searched up Contamination, and Zorc conceded right away.

Budde had a first turn Duress, and Zorc cast Brainstorm in response to protect his hand. Once Duress resolved, Budde saw City of Traitors, Poulluted Delta, two Cloud of Fairies and Masticore. Deep Analysis was the only spell, and had to go to the graveyard. Budde played Careful Study on the next turn, discarding two lands. Zorc flashed back the Analysis, and Budde played another Duress. Zorc's hand contained the two Faeries, Masticore, two lands, Chain of Vapor and Mind's Desire- the Desire went to the graveyard. 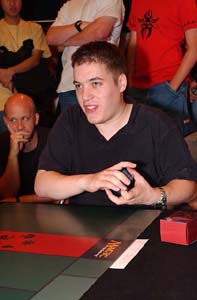 Cabal Therapy dealt with Masticore, and now Zorc was a little short on threats. Frantic Search let him produce a mana and discard two Ancient Tombs, and for lack of any other options, Zorc cycled Cloud of Faeries. Budde played Brainstorm, activated Polluted Delta, and summoned Nether Spirit. He sacrificed it to flash back Cabal Therapy, getting Chain of Vapor out of the way. It seemed that Budde would be able to get the Contamination lock down once again, but after cycling another Faeries, Zorc drew into Masticore. It shot down the Spirit when it came back, and attacked for four. On end step, Budde used Vampiric Tutor to get Cabal Therapy, and used it along with flash back to strip Zorc's hand down to one card, and lock him under Masticore.

Another Vampiric Tutor set up Entomb/Exhume, and put Verdant Force into play. This did give Zorc a Cloud of Faeries from his graveyard, and it attacked to bring Budde down to six. With the help of four mana, the Masticore was even keeping pace with the Saprolings. Things were looking pretty bad for Budde, but he used Reanimate to take Zorc's dead Masticore, going down to one. Facing a board he couldn't win from, Zorc had to take his chances, let his Masticore die, and hope for the best. He found Snap with Frantic Search, but it merely delayed the inevitable.