Round 16: Raphael Levy vs. John Larkin 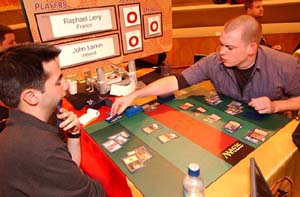 Ireland has fallen to second place in the team standings behind the surging Argentinean team, and John Larkin blames Raphael Levy, who fell last round to the top Argentinean, Diego Ostrovich.

Levy cast a Mental Note, and then Larkin cast a Mesmeric Fiend, taking a moment to decide to steal Levy's Aether Burst. Levy played a Werebear, and then Larkin one-upped him with a Shadowmage Infiltrator. Levy tried putting out some small creatures like Werebear and Nimble Mongoose, but Larkin had Edict's at the ready and the Infiltrator was drawing more.

At one point Levy cast Careful Study and discarded a Roar of the Wurm and a Wonder, but when he flashed back the Roar, Larkin first insulted him for his "pathetic" token (a gold button), and then dispatched the token with a Faceless Butcher. Larkin had played a Nantuko Shade, and it, along with the Finkel, were wailing away n Levy.

At one point, Levy emptied his hand a cast a Breakthrough for three, and Aether Bursted a few of Larkin's creatures, but in the end he had no way to block the Infiltrator.

Levy needed one of his Wild Mongrels to show up to stop the Infiltrator, and he had no such luck in game 2.

He played out a Werebear on turn 2, which was Edicted, another Werbear on turn three, and then a Wonder and a Nimble Mongoose on turn four. Larkin had put out a Finkel, and then played a Mesmeric Fiend. Levy showed his hand of an island and another Wonder.

Levy: "This was a bad draw."
Larkin: "I thought it would be better than this." 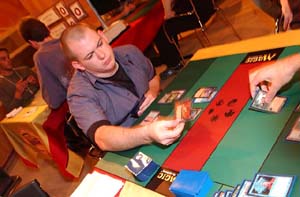 With an empty hand and six mana and a Mongoose in play, Levy topdecked an Upheaval. He cast it, replayed a Forest and dropped the Mongoose. He wasn't even close to threshold. Larkin passed the turn, and Levy played a Werebear. Larkin recast his Mesmeric Fiend and was saddened to see that Levy had drawn a Breakthrough which would be capable of giving him threshold at a moment's notice, so he took that card.

Unfortunately Levy drew another Breakthrough on his next turn and he cast it for two, discarding three Wonders and getting threshold. He attacked for seven with the Bear and the 'Goose.

Larkin had a Coffin Purge, good enough for two of the Wonders, and an Edict for the Werebear. But the third Wonder and the Mongoose were enough to kill Larkin over then next few turns. 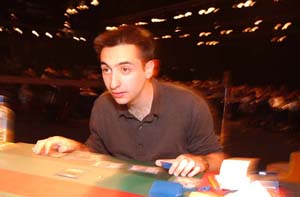 Both players started with 2/1's in the deciding game—Larkin played a Nantuko Shade and Levy a Seton's Scout. Levy's was killed with an Edict, and he replaced it with a Werebear, fully thresholded thanks to a pair of Careful Studies.

Faceless Butcher took care of that Bear, and then Larkin dropped the hammer in the form of Rancid Earth on Levy's only forest. Levy was stuck with uncastable spells, and Larkin started playing out guys.

When Levy finally drew another forest, Larkin had another Rancid Earth at the ready. With no access to green mana, Levy couldn't play any of his creatures and Larkin took the match.

Larkin had sided out the Rancid Earths for the second game, but after losing to Upheaval he put them back in.