"It's fortuitous we got paired against each other," Rob Dougherty informed his opponent as they sat down for the final round of Swiss at Pro Tour Nagoya. "We're close in tie breakers."

The Hall of Fame member had an outside shot of making the Top 8 with a win, but then again, so did his opponent. Fabian Thiele of Germany defines himself as a casual player, but after winning a PTQ in his hometown of Hamburg then making the Top 20 at Pro Tour Paris, he found himself playing for the possible chance to compete on Sunday. That's some kind of casual player!

The first game started off with a Puresteel Paladin for Rob. The 2/2 was the lynchpin of his

deck, and Fabian was so scared of the creature he immediately used Slagstorm to take it out. Dougherty opponent reloaded with a second copy and a Flayer Husk, allowing him to draw an additional card. That was all the second Accorder Paladin would do, however, as a Red Sun's Zenith from Thiele sent the Paladin packing. 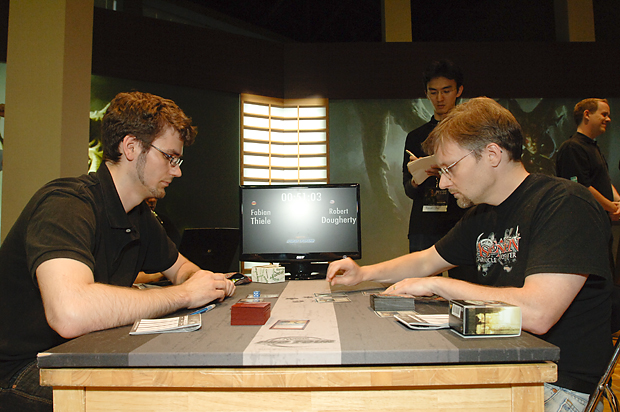 New School vs. Old Guard: Fabian Thiele is at his second Pro Tour, while Rob Dougherty is at his... lotsth?

A Kemba, Kha Regent and Darksteel Axe joined Rob's team, while Fabian contented himself with accelerating mana via Sphere of the Suns. The methodical player, who is a top-ranked chess competitor in Germany, paced through his turns, carefully considering all potential plays. He cast a Koth of the Hammer and used it to animate a Mountain and attack his opponent. The move left Rob at a healthy 16, and Thiele had only an Inkmoth Nexus back to block should his opponent decide to swing in to the planeswalker.

Swing Rob did sending his Flayer Husk Germ token and Kemba, Kha Regent with Darksteel Axe into the Koth of the Hammer. Postcombat the planeswalker stood at three loyalty, and Thiele had lost his Inkmoth Nexus as a chump blocker. Fabian came steaming right back into things, however, as he cast Kuldotha Phoenix and was able to attack his opponent to just 8 life with some help from another Koth of the Hammerified Mountain. That put Rob on the back foot and in need of finding a solution for his opponent's flier. He was able to clear his opponent's Koth of the Hammer and keep two Inkmoth Nexuses up to block the Phoenix, a plan that promised to potentially buy him the time for Kemba, Kha Regent to generate enough Cat tokens to swarm for the win. 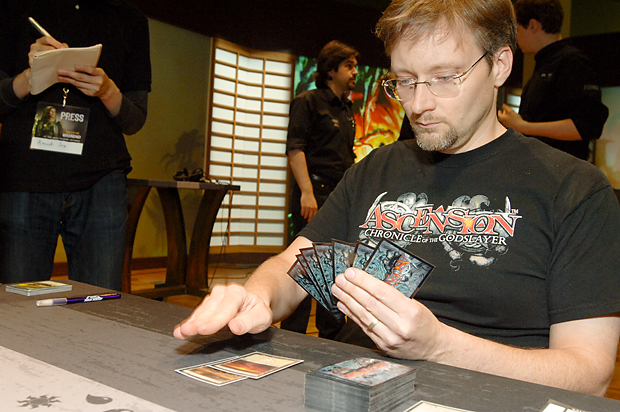 A second Kuldotha Phoenix complicated those plans, forcing Rob to use both Nexuses in a single turn. He bumped his Cat count up to five tokens but was only able to attack his opponent to 7. That gave Thiele an opportunity to rip a burn spell to win, as he sent both his Phoenixes to the red zone. Did he draw it? He did! Red Sun's Zenith handed the first game to the European player.

"Did you have it or draw it?" Rob asked his opponent as they shuffled for Game 2, referring to the burn spell.

"I drew it," Thiele replied, a sly smile spread across his lips.

Glint Hawk led the way for Rob in the second followed by Mortarpod. Fabian cast a Shrine of Burning Rage on the second turn, hoping to outrace his opponent with burn before the Hawk and a third-turn Kemba, Kha Regent did him in. Accorder's Shield to pump Kemba, Kha Regent shut off Thiele's main plan: using a metalcrafted Galvanic Blast to take the 2/4 out. At 2/7, the legend was going to be a much bigger problem for the German.

Switching to plan B, Thiele cast Into the Core to hit both of his opponent's Equipment. That cut the Kemba, Kha Regent down to size, but a Darksteel Axe from Rob a turn later put the hurt back on and once again made the 2/4 the center of Fabian's attention; if he didn't kill it now, it was going to start generating Cat tokens. He cast Slagstorm to take out the Glint Hawk, then used Galvanic Blast to finish off his opponent's Kemba, Kha Regent. That left Rob with only an Inkmoth Nexus for an attacker, but he put it to good use by suiting it up with Darksteel Axe and getting in for big poison damage.

Kuldotha Phoenix hit to serve as a blocker for the Nexus, but Dispatch exiled the 4/4 instead and Rob was able to get in for 2 more poison, with the Nexus now wearing Sylvok Lifestaff. Koth of the Hammer came down for Fabian, who used it to untap a Mountain but did not attack. His plan was to blow up his Shrine of Burning Rage, now on ten counters, should his opponent opt to attack with Inkmoth Nexus. It was a good setup for the German, who could rest assured his Koth of the Hammer would probably get to five loyalty and go "ultimate" because Rob had to have a second attacker to knock counters off it. Even then, Rob would need Fabian to not have any other removal or draw any to kill that potential creature. 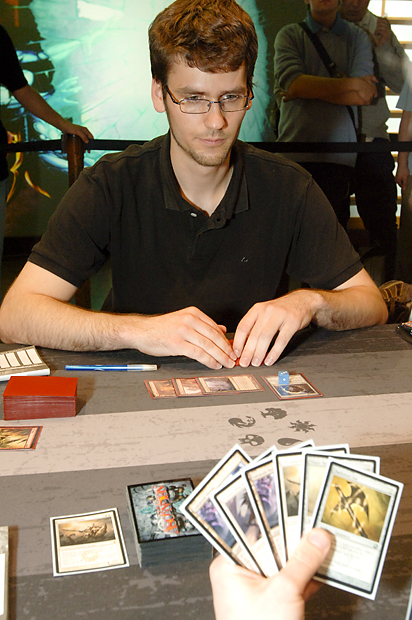 Thiele is in no hurry either.

Rob knew he was in trouble, and went into the tank on his turn to come up with a solution. Neither Fabian nor Dougherty rushed to make decisions, instead carefully considering all plays and angles before making a move. Indomitable Archangel was the play for the American, but his opponent was ready. Fabian activated his Shrine of Burning Rage to lower Rob's life total by 10, then untapped. He activated Koth of the Hammer to allow him to double the mana from his Mountains, then used that for a Red Sun's Zenith. Dougherty checked the math and saw he was dead.

4 Kemba, Kha Regent 1 Sword of Feast and Famine 1 Sword of Body and Mind 1 Sword of War and Peace 1 Mirran Crusader