"Oh no, no, no, no, no!" cried Vincent Lemoine, as he took his place under the lights of the feature match arena. "I should have been able to draw this round... do you want to draw?"

The big Belgian had been unluckily paired down against the American Sam Black, who was on 34 points and couldn't afford to draw. On the line in this win-and-in shootout was a place in Sunday's Top 8, but for Vincent Lemoine a win would also be the difference in locking in his status as a Level 7 Pro for 2012, open up the possibility of making Level 8, and take him another huge step towards being a real challenger in the Player of the Year race. 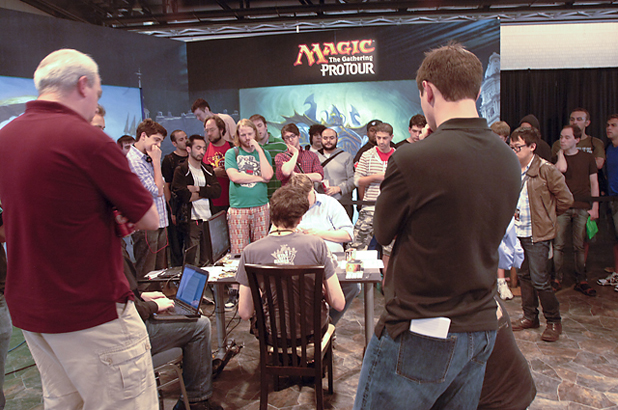 With a Top 8 berth on the line, a crowd quickly gathers.

Lemoine's quick and resilient Twelvepost deck (poorly named, as it only actually plays eleven "Posts") had served him well until now but he was facing a lethal opponent in the form of Sam Black's Infect Blazing Shoal combo deck. Sam's mono-blue version of the deck was boiled down to the basic essentials, playing as many redundant copies and search cards as it could muster to ensure its killer strike was reliable.

Black won the dice role and opened up with a Ponder, then his lethal Blighted Agent. Across the table, Vincent Lemoine played a Gruul Signet... and lost the game.

After playing a third land, Sam Black cast a Gitaxian Probe to scout out any possible surprises in his opponent's hand then played a Peer Through Depths to dig up a Blazing Shoal. Casting a Summoner's Pact to find his other half of the combo—Progenitus—Black proceeded to discard the world-eating Hydra and cast Blazing Shoal to give his Blighted Agent +10/+0!

One attack step later and it was all over.

"I don't think our decks are very interactive," Black told his opponent as the two players sideboarded, with no small amount of understatement. The only interaction in the first game had been between Black's Blighted Agent and Lemoine's face! 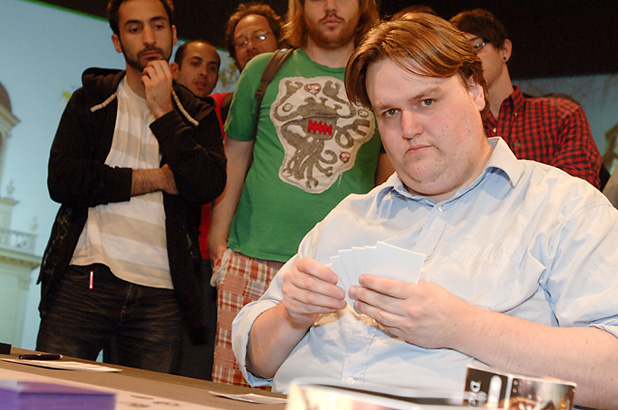 Heading into the fightback game, Lemoine's body language did not speak of a man confident of victory. Had this surprising final match ruined the big Belgian's cool? Before the pairings were posted Vincent Lemoine must have thought that his work was done for the day, only to find that he faced one last high-stakes duel with everything on the line.

Things went from bad to worse for Lemoine in his must-win comeback game, as he was forced to mulligan before keeping his second hand of six cards. He repeated his first game strategy with a pair of land and the Gruul Signet, while Sam Black held back his Blighted Agent from the table and chose to Ponder and Preordain his way through the first two turns.

Lemoine continued his steady mana ramping with an Overgrown Battlement, while Black played an Inkmoth Nexus and Blighted Agent, preparing to strike with rattlesnake speed and venom. Lemoine passed the next turn without a play, leaving all his mana open. 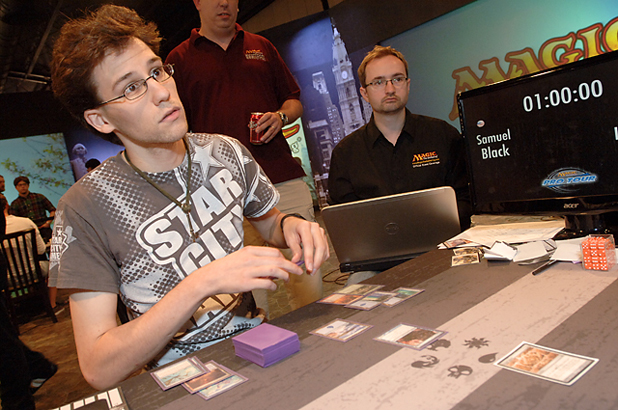 ...but Sam Black stands in his way.

The threat of an instant response barely gave Sam Black pause. Transmuting a Muddle the Mixture into Blazing Shoal he sent his Blighted Agent into the Red Zone, discarding a Dragonstorm from hand to give the Agent +9/+0. Overgrown Battlement had nothing to say; Blighted Agent is unblockable.

Vincent Lemoine tapped all his mana and the crowd held their breath, but all Lemoine could play was a futile Through the Breach, putting a Primeval Titan into play that still couldn't block the Blighted Agent. With a sad sigh, Lemoine offered his hand in congratulations and Sam Black wrapped up a swift win!

Sam Black makes the cut to the Top 8 of Pro Tour Philadelphia, while Vincent Lemoine must look elsewhere for the 1 Pro Point he needs to lock up Level 7 status in 2012.