Round 16: Takashi Ishihara vs. Masahiko Morita

Masahiko Morita is here to crush some dreams. The consummate silver medallist has already earned a position in tomorrow's Top 8. All that remains is to decide the fate of one last competitor. In this case, it's Takashi Ishihara, a relative unknown who needs the win to get the first feather in his cap. 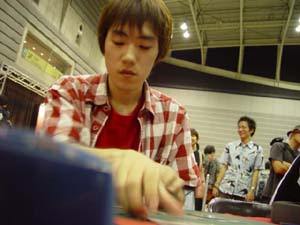 Both players matched facedown Angels, but Ishihara only swung for two, preferring to wait on his mana. Morita yielded to Wing Shards and stayed home. Soon they were both unmorphed and staring at each other. They both started to work their Eternal Dragons. Morita swung in with his Angel and drew out the Wing Shards. He tapped seven to replace it with Eternal Dragon.

Ishihara played a second Angel. Traded his Dragon for one of them in combat and then dropped Akroma. Ishihara had the Vengeance to set things back. Morita regrew and cycled his Dragon, then played out a Lightning Rift. Ishihara made an Akroma and swung. Morita took it and then Vengeanced.

Ishihara played a second Rift, and hoped to race Morita's Dragon. He brought him down to one, but was at six himself. He tried to cycle him out on his turn, but Morita was the non-Active player, and was able to use the stack to his advantage. He could resolve his Rift trigger first, then respond to Ishihara's triggers with more cycling of his own. As he had two cyclers in hand, that was game. 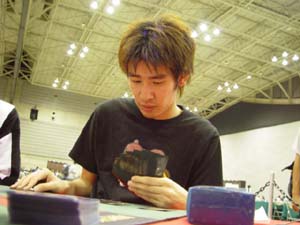 Ishihara almost kept a hand of Decree of Justice, two Decrees of Annihilation, Akroma and three land, but regained his sanity in the nick of time. His next six let him have a face-up Angel on turn four, but Morita was right behind him and fronting Wing Shards, so they were soon in a staring contest.

Morita broke the monotony with a Lightning Rift, but it was Wiped Clean after a pair of cycles. Morita Oblated it back into his library. His next play was a twice-amplified Kilnmouth Dragon. Ishihara had no choice but to play Decree of Annihilation.

It was seven draws before either player had two lands. Ishihara hit first and made a Lightning Rift. He cycled Eternal Dragon for damage and then drew his fourth land. They matched morphs. Morita's became an Angel while Ishihara brought back Eternal Dragon. That was just the window he needed to cycle away Decree of Annihilation, clearing out their lands and leaving Ishihara with a useless morph. A few Angel strikes later, Morita had won.