This was the question posed by Amiel Tenenbaum as he went to sit down opposite Masahiko Morita in the final round of Pro Tour–Yokohama. Amiel has been in the last round feature matches before in this situation, and got his ninth-place spot each time. Morita has the most Pro Points in the history of the game without a Pro Tour Top 8, and he would be anxiously chasing it here. 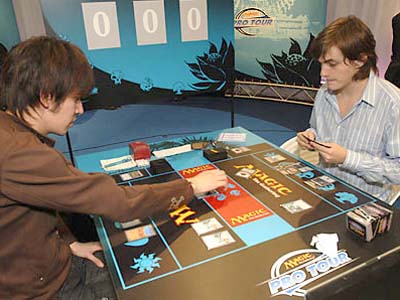 Masahiko Morita and Amiel Tenenbaum trade Teferis and counterspells in the final round.

Morita began and went aggressive with a morph off 3 Islands on turn three. He suspended Ancestral Vision on turn four, attacked and passed. Meanwhile, Amiel was simply playing lands, and building up mana on his storage lands. His first play was an Aeon Chronicler suspended for 3. All the while Morita continued to beat in with morphs, playing a second one to speed his clock.

Damnation from Amiel was countered, and the following turn a second faced Dismal Failure. Amiel had the Cancel to get it through, and finished off two Vesuvan Shapeshifters.

Morita's first Ancestral Vision got played, and he put out another morph. Amiel then got his first creature of the game into play, and ran in for 7 with his Avatar. Morita revealed his morph to be a third Shapeshifter and got stuck in for 4 with it. With three storage lands, Amiel could conceivably play plenty of spells on his turn, but instead elected to keep them in hand, and attack with a 7/7 Aeon Chronicler. After combat he had Haunting Hymn targeting Morita, and a Dismal Failure to stop Cancel. Morita played a Snapback on Aeon Chronicler, then lost his hand.

The topdeck he had for the turn was a Riftwing Cloudskate, but there was little to bounce. Amiel had a better turn, stopping a second Ancestral Vision the turn before it got to be played using Pull into Eternity, and re-suspending his Chronicler. From there, it was a perfunctory matter for Amiel to finish things off, with one big swing the following turn.

On turn two of the second game, Morita suspended a Riftwing Cloudskate. He followed this up with a suspended Ancestral Vision the following turn. When the Cloudskate finally got as far as the stack there was a small counter battle with a Cancel coming out on each side, but ultimately the 2/2 flier bounced Amiel's Dreadship Reef. Tenenbaum then played Extirpate on his opponent's Cancels and saw Trickbind, Ancestral Vision, and a pair of Teferi Twins in his opponent's hand, along with the contents of his deck.

For his own turn, Amiel played Careful Consideration to improve his hand, and passed. He took 2 from Riftwing Cloudskate and saw Ancestral Vision #2 suspended—better for him than Teferi coming down, which would not be possible for a while as Morita was shy on land. When Ancestral Visions #1 was countered, Morita simply suspended another and continued to beat with his 2/2.

Amiel played a Mystical Teachings at the end of turn, and found himself a Pull from Eternity, which Morita responded to with a Teferi. Damnation put an end to that plan. 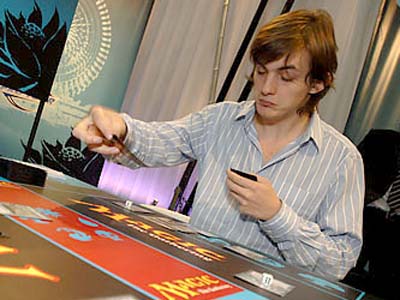 At the end of his own turn, in response to Amiel tapping out to put a counter on Caliform Pools, Morita played his Pull to stop another Ancestral Vision, then a Teferi of his own to clear the board. Soon, Morita had yet a third Teferi. Amiel had to main phase flash back Mystical Teachings to find another Pull into Eternity for another Ancestral. Meanwhile, Teferi beat in, and was soon joined by Riftwing Cloudskate, to bounce Amiel's fullest storage land.

Amiel again used the legend rule to clear the board of Teferi. All the while he was taking more hits from Riftwing Clounskate, and another 'Skate came soon after, forcing a Mystical Teachings from Tenenbaum to find a Careful Consideration, which he soon played.

Another Mystical Teachings followed and found Tendrils of Corruption, which would be pretty powerful given the Urborg, Tomb of Yawgmoth that nestled among among Amiel's nine lands.

Morita played his final Teferi, which got hit by the Tendrils, taking Tenenbaum up to a much healthier 12, and finishing off the Teferi games.
"We got it!"

He tried for a Mystical Teachings but was hit by a Dismal Failure, which was soon Extirpated. This left little in the way of counterspells left in the mono blue deck of Morita's. There was still a Trickbind in hand, but when you know it's there, it really isn't so much of a trick.

Morita played a pair of morphs and passed.

"Very obvious. Very obvious," declared Amiel, who felt he had a good read on what they were.

At the end of turn he flashed back Mystical Teachings, and found a Sudden Death. Two Sudden Death killed the Cloudskates, and Amiel had to make a 1/1 Aeon Chronicler as a blocker for a morph, having been knocked down to very low life by incessant small beatings throughout the game.

After chump-blocking for a turn, he sang the name of the one card he needed to draw.

The first two games had taken quite a while, so things were quite rushed for the final game.

Amiel had a mulligan, and it was Morita with the first plays, suspending Ancestral Vision on turns one and two and following up with a morph on turn three. The first Ancestral Vision was hit by Cancel, and Morita had a Teferi as soon as he hit turn five. Damnation killed both the legend and the morph, which turned out to be Willbender.

Morita tapped out for an Aeon Chronicler suspension with two counters and allowed Amiel to Careful Consideration on his turn with impunity. He followed up with a morph. Only the Chronicler attacked the turn that its suspension ended, taking Amiel to 9.

Damnation again cleared the board, and showed the next morph to be a Willbender too. Morita played Teferi and beat in further, taking Amiel to 6. At this point Tenenbaum had enough mana to make Assembly-Worker tokens, but they wouldn't have to block, as he also had a Sudden Death for Teferi. He used Mystical Teachings to find a Teferi of his own in order to stop a freshly suspended Aeon Chronicler from Morita. 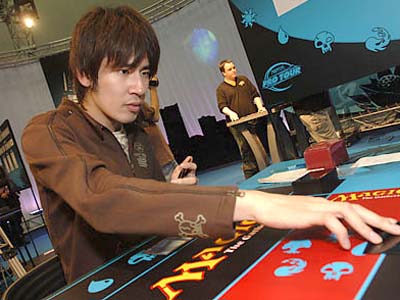 The Japanese player tried a Riftwing Cloudskate, only for it to be hit by Dismal Failure. A second one was Canceled. The tide appeared to be turning in Amiel's favour all of a sudden, but time was now very tight. Morita played a morph and passed. Amiel flashed back Mystical Teachings for another one.

Time was called in a very tight game, and when Amiel played a Tendrils of Corruption on turn one of five, it looked unlikely that Morita would be able to get the kill. When Morita caught Amiel tapped out with Brine Elemental the following turn, the game had to be a draw.