t can be difficult to describe the tension of a match like this. The pressure, the attention, the waiting eyes of not only the players on site but the thousands watching from home. The thousands of dollars on the line, the Pro Points, the tournament invites, the fans who take sides.

There's almost nothing like a win-and-in Round 16 of a Pro Tour, and this one in particular has a crushing amount of pressure on it. For one, No. 13 Josh Utter-Leyton is the lone 36 pointer to get paired down, turning what must have surely been relief and happiness at what looked like a sure trip to his fifth Pro Tour Top 8 into yet another round, another grind, another world-class player to take down.

Joel Larsson must feel it as well. Though he has to play, his back is truly against the wall. There's a chance Utter-Leyton could make the Top 8 regardless of his result here—not necessarily a good one, but certainly a chance—but Larsson can only pick up his second Top 8 with a win. 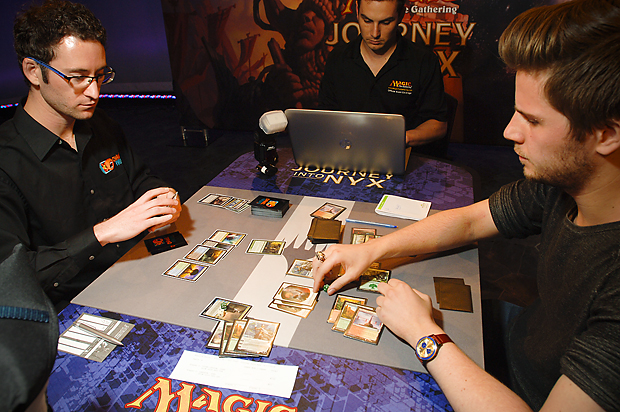 The pressure was on for Joel Larsson and No. 13 Ranked Player Josh Utter-Leyton. Utter-Leyton faced a rough round by being paired down, as his "win and in" from last round no longer mattered. He needed to escape this match without a loss.

But if they were feeling any pressure, these two seasoned veterans didn't show it. Calm, focused, and fully aware of what they had to do, both Pros shuffled up in silence and wished each other good luck.

"Not too much though," Larsson said.

Appropriately, the pair were facing down with what had become the decks of the tournament. Utter-Leyton was on the ChannelFireball BUG deck with Sylvan Caryatid, Courser of Kruphix, Prognostic Sphinx, planeswalkers, and removal. Literally dozens of players came to game with BUG this weekend, and, by and large, most of them put up strong results in the Constructed portion of the event.

Larsson was, on the other hand, on the deck that was both one of the most popular and one of the most expected. Red-Green Elspeth played many of the format's best cards, including possible number one Elspeth, Sun's Champion. Xenagos, the Reveler, Stormbreath Dragon, and the Caryatid/Courser duo highlighted the rest of the deck, providing plenty of power to match BUG's mid-game and long-game plan.

Both players accelerated their mana with green two-drops into three-drops and scry lands on the third turn. Ashiok came out to play for a moment for Josh, but was hidden under a Banishing Light. Unravel the Æther freed it and Bile Blight took out the Voyaging Satyr Larsson had been depending on to kick-start his proactive game plan.

Basically, Utter-Leyton was way, way ahead. Or at least it seemed that way.

Utter-Leyton used Ashiok to cast a Courser of Kruphix, which, in turn, was hit by a Destructive Revelry. The two points of damage were redirected to a freshly cast Kiora, the Crashing Wave, ending any wave crashing she might have been looking to do. And when a Magma Jet finished off Ashiok, Utter-Leyton suddenly had nothing but his mana. 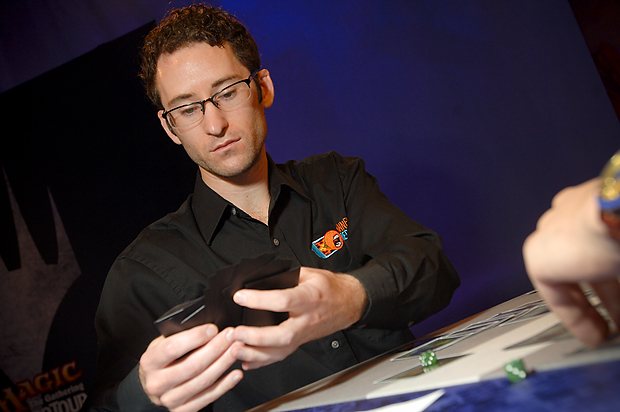 Utter-Leyton's planeswalkers went to work, but Larsson was not without options.

That sequence allowed Larsson to resolve and hit with a Stormbreath Dragon, only to lose it to a Silence the Believers the following turn. Larsson resolved an Elspeth, but lost it to Hero's Downfall.

This was how this midrange match-ups went back and forth. Threat begot answer begot threat begot answer. And when cheaper answers took out threats, or multiple threats, as Destructive Revelry had, the script would flip.

And so it went. Larsson, on the more aggressive side of the match-up, kept playing more and more threats. Utter-Leyton, meanwhile, was working his planeswalkers – both Kiora and Ashiok – to try to find any foothold he could.

That foothold, as it turned out, was a Polukranos, World Eater off his Ashiok. Larsson had his own copy of the legendary hydra, but Kiora kept it on lock-down turn after turn. Suddenly Utter-Leyton was able to relieve the pressure Larsson's leftover soldier tokens had been able to apply, all while continuing to tick up his planeswalkers.

But the nature of planeswalkers made that proposition tenuous, and a Lightning Strike ended Kiora's reign over Polukranos.

Ashiok, however, was still churning away turn after turn after turn while the two mages at the table fought over the field of battle. Larsson's deck was getting precariously small, and his hand was already nonexistent. It seemed possible for Utter-Leyton to play Protect the Planeswalker long enough to simply mill Larsson out.

And that was the decision Larsson put Utter-Leyton to over the final turns. With just six cards left in his library, Larsson sent in a Stormbreath Dragon to kill Ashiok while Utter-Leyton had Prognostic Sphinx available to chump block. His options were:

Block and lose one of his best cards when the Dragon went monstrous, but guarantee milling three cards the following turn.

Don't block and lose his fastest win condition, but retain the ability to scry for an answer to the Dragon

Have your answer ready? Six cards, nothing relevant in hand, an Ashiok and a Sphinx with a very angry dragon coming your way? Okay, write it down and read on.

Despite admitting "I'm not killing him with damage," Utter-Leyton allowed Ashiok to fall in order to attack with his Sphinx the following turn. The scry, unfortunately, didn't find him the help he needed, and over the next two turns, with few enough cards in Larsson's library to count on one hand, Stormbreath Dragon ended yet another game, as it so often does.

Larsson pumped his fist when Utter-Leyton conceded, letting the excitement of the moment show through, if just for one second. 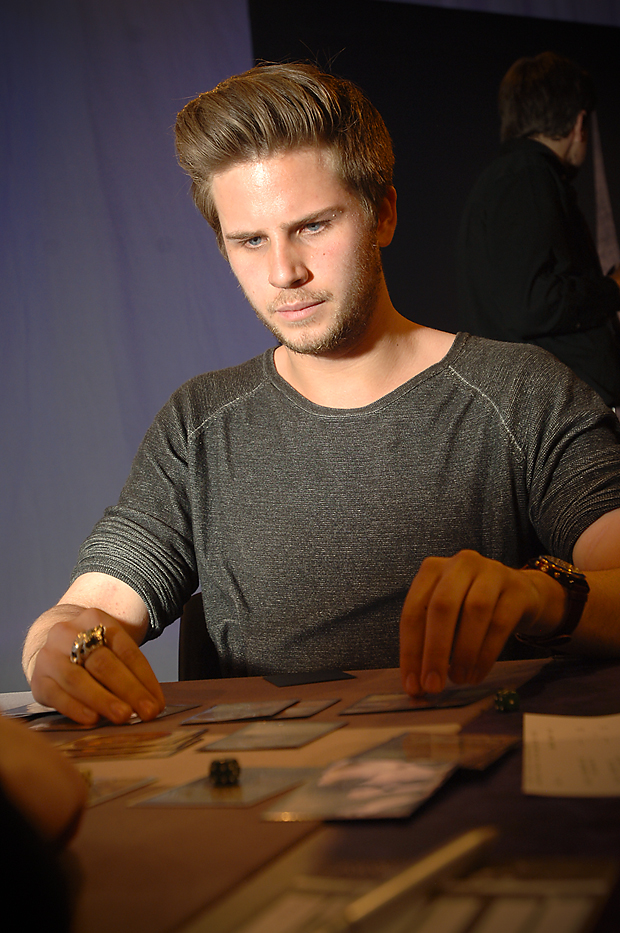 Despite bleak odds, Larsson fought back in the first game and put the pressure on his opponent.

Dueling planeswalkers kicked off the second game, as Ashiok, Nightmare Weaver faced down Xenagos, the Reveler and later Ajani, Mentor to Heroes. It was three against two for a place in the Top 8. Hardly seems fair.

Two became one when Utter-Leyton sacrificed Ashiok to turn it into a Stormbreath Dragon. Dragon, in turn, slew Xenagos. Coupled with a Hero's Downfall, Utter-Leyton's entire turn was dedicated to clearing the board of any and all planeswalkers.

Larsson, again with the back and forth, cleared the board of all large creatures in order to try and get his Elspeth going. Down went the dragon thanks to Elspeth's -3, but that left the skies perfectly clear for Prognostic Sphinx to wisely rule the roost.

And rule it did. First, the Sphinx let Utter-Leyton scry. Then, it took down Elspeth. Then it sat back and defended a Kiora. Then, when the coast was clear, it scryed some more.

Utter-Leyton was firmly in control now, and a second Sphinx only cemented his hold on the game. The engine of Kiora, Courser of Kruphix and Prognostic Sphinx let Utter-Leyton draw pretty much whatever he wanted. From there, it was academic.

"This is quite the match," Larsson said, preparing for what could be the last game of his tournament. "A lot of powerful stuff going on."

Time was running down, but Utter-Leyton knew the stakes and wasn't going to slow-play Larsson.

"We're going to play Magic: the Gathering. We're not going to slow things down," Utter-Leyton promised.

Larsson certainly had no intentions of moving slow, bringing all kinds of monsters to drop on Utter-Leyton. First came Arbor Colossus. It dealt one might blow, but met a Hero's Downfall. Then came Polukranos, World Eater, though it Dissolved into thin air. A Mistcutter Hydra dealt four, but Elspeth found Larsson's Thoughtseize.

All the while, Utter-Leyton was stuck on six mana with a Silence the Believers in hand. Larsson sent his team to slay first Kiora then Ashiok, leaving Utter-Leyton's 10 life alone.

But then, lo and behold, a seventh land appeared. A newly appeared Stormbreath Dragon survived the carnage, but the two mighty hydras were Silence the Believers. The reason the Dragon survived soon became clear, as it had the wrong kind of protection to fend off Kiora.

And with that, time was called in the round.

Larsson was so close he could taste it. Utter-Leyton was at just 6 life, but had holed up behind a wall of blockers and Kiora. Polukranos looked promising, but no matter how hard Larsson searched he just couldn't find a way to break through. He counted, recounted, looked up to the heavens to think – or maybe for some help – and rubbed his eyes, hoping that something new would appear before him, something that could break through for just 6 measly points of damage.

Turns one through three passed with no answer, no passage through the blockade, nothing to keep Larsson's hopes alive. A draw was as good as a win for Utter-Leyton, so he made no move to do anything beyond defend those last 6 life, as those precious 6 life guaranteed his spot in the Top 8.

Finding no answer, Larsson tried the only avenue he had left.

"Would you like to concede? That's a draw for both of us. That's the worst possible result for both of us," Larsson asked, forgetting for a moment that Utter-Leyton was on 36 points. 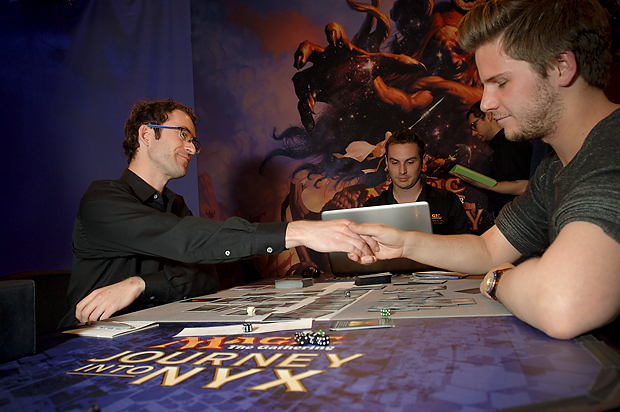 With no way to win in extra turns, Larsson offered the handshake, congratulating Utter-Leyton on his Top 8 finish.

Indeed it was. A tie wasn't what Larsson needed or wanted, but it was all it took to put Utter-Leyton into his fifth Pro Tour Top 8.