Round 16: Tommi Hovi vs. Mike Turian 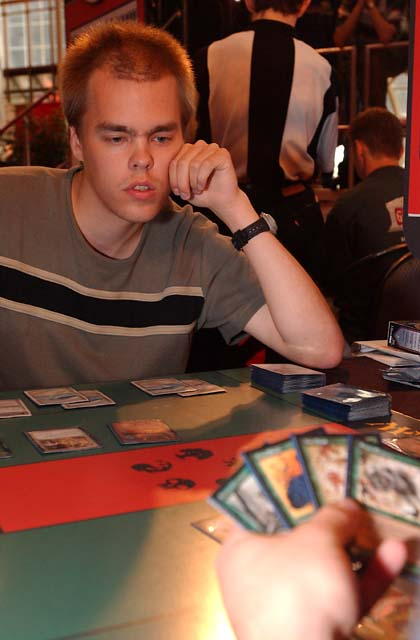 Mike Turian is one of the most well-liked players on the Tour, and he led Potato Nation to a win in the first Pro Tour of the season. With just three rounds left in the season's last Tour, he and Tommi Hovi - the first man ever to win two Pro Tours - met to see who would move to good position at 12-4, and who would have their back to the wall and their fate in the hands of their tiebreakers even if they did win out. This was also a rematch of the first match Turian ever played on the Pro Tour - way back at Chicago '97 (the greatest PT ever, of course).

Turian brought Secret Force with him for Day 3 of Worlds. His monogreen version uses elves and Wall of Roots to bust out fast Verdant Forces, usually via Natural Order, but he's already hard cast the Best Fatty Ever twice. Hovi is running an Oath of Druids deck, and this matchup should prove to be all about Hovi's key enchantment.

Hovi used Force of Will to stop Turian's first Elvish Lyrist from coming into play, but Turian's second one resolved. That put Hovi under a lot of pressure since his normal answer to creature decks - the Oath - wouldn't work (unless he found two, of course). For the next few turns, Turian played random "dorks" and Hovi felt obliged to counter them. Feeder and Weaver were both stopped with Counterspells, then Turian's Masticore resolved. Two Brainstorms and an Impulse did give Hovi access to Powder Keg, which could in theory kill the Lyrist and clear a path for an Oath. However, Turian used Natural Order to fetch an Uktabi Orangutan and that took care of Powder Keg. Hovi drew one last card and scooped.

Secret Force never looks good, but it does seem to win a lot. The spirit of Wakefield is strong with this one.

Hovi thought about his opening hand for quite a while before game 2. It had only one land, but the spells were quite good. He decided to cash it in for six new cards and then shook his head when the forbidden peek at the top of his library revealed a land. Turian took a trip to Paris too. Each player played a potentially devastating enchantment on turn 2. Hovi got his Oath into play while Turian busted out a Choke. The Choke left Hovi pinned at just one Savannah for mana, but he did have Oath up and running. It delivered up a Spike Feeder the first time he activated it and then Turian Natural Ordered out a Verdant Force, seemingly perfectly willing to let Hovi Oath up whatever he could. Hovi didn't like his chances of outracing Verdant Force, so he dispatched it with Swords to Plowshares, and then had to sacrifice his own Spike Feeder so Turian wouldn't Oath up another one. 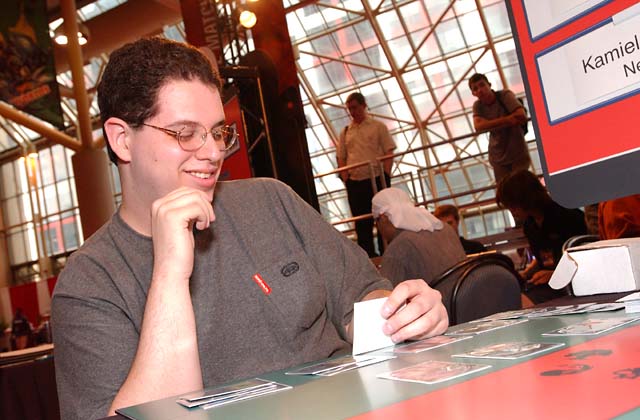 Hovi still had to deal with Turian's Choke and he had trouble operating without blue mana. Turian was able to Emerald Charm away the Oath and then get an Elvish Lyrist into play. Things got really ugly when Turian top-decked a Dust Bowl. Two turns later Hovi had no mana of any color, though he did draw a Wasteland that made it possible for him to play whatever lands he could draw off the top. Turian didn't have much of an offense - he was beating down with a lone Elvish Lyrist until his second try at Uktabi Orangutan resolved (the first "grey ogre" got Force of Willed). Natural Order soon fetched the other Verdant Force out of Turian's deck and these were looking very good for the green mage.

Both players were laughing at the savagery and Turian was making sound effects as his Saprolings came into play. In Turian's final analysis, "Creature decks are just too good against Oath." Well, if you replace "creature decks" with "land hosers," that might be true. The round before watching Turian and his Choke, I watched Jon Finkel destroy Bob Maher with Back to Basics.