Round 16: Two Champs, One Slot

Komura and Antoine Ruel are no strangers to the final stage. Komura took the cake in Nagoya last January and Ruel in Los Angeles in October. Both players seemed fairly somber going into this match. Playing for the Top 8? Great! Having to knock out your buddy? Not so much! Made even worse by the fact that the match-up favored Ruel, but his breakers were worse than Komura's. According to Ruel's brother Olivier, Komura was definitely in if he took three points away from this match, and Antoine was probably the favorite of the remaining bubble players.

All that remained was a battle.

Komura opened with a telling roll of 7 on the die, but Ruel matched his blow with a 7 of his own, how exciting! Wait, what? You want the bit about Magic? Fair enough, on the reroll, Komura topped Ruel's 4 with a 5.

Anyway, Ruel's deck basically wants to keep the other guy tied up with too many cards in hand to avoid the Ebony Owl Netsuke. If Komura had been flinging little men onto the playing field each turn, Ruel could have been in trouble. Instead, Komura's first play was a turn four Loxodon Hierarch that ran headlong into a remand. By now, Ruel had already built up his infrastructure with a turn two Howling Mine and a turn three Ebony Owl, and it was merely a matter of keeping the odd fat beast off the board, and tapping Komura down with Exhaustion and Gigadrowse.

This time around, Ruel was forced to throw away his first seven cards, opting to keep the next six being all land, but at least included a Mikokoro, Center of the Sea. The game went something like this. 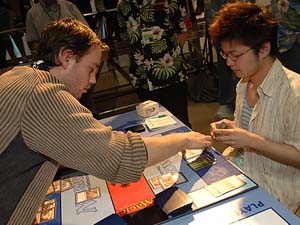 Komura: I got a Sensei's Divining Top.
Ruel: I got a land.
Komura: You know what's good with Top? Shufflers. Check out my Sakura-Tribe Elder!
Ruel: I got a land.
Komura: Watch me use my top! Wait, no land. I'll sacrifice the Elder, and look again! There's one.
Ruel: I got a land too.
Komura: Mikokoro?
Ruel: Yeah, it's a land.
Komura: I'll make… an Ivory Mask!
Ruel: Indeed.
Komura: That's good against you, right?
Ruel: Maybe. I got a land.
Komura: Time to go for gold, Yosei, the Morning Star.
Ruel: I got a land, I mean a Remand.
Komura: That's certainly better than a land when it comes to Yosei.
Ruel: Sure is, but I'll probably draw a land off it anyway.
Komura: Right, I think I'll go with this Elder and this Top instead of trying the Dragon again.
Ruel: You'll never guess…
Komura: A land?
Ruel: You guessed!
Komura: I think I'll try another Ivory Mask, what do you think?
Ruel: No, I think I'll Remand that one.
Komura: You drew a non-land?
Ruel: I can neither confirm nor deny such harsh allegations and rumors.
Komura: But you just…
Ruel: Quiet! I shall now Cerebral Vortex myself. Oww. And in my turn, a land.
Komura: Okay, I'll now…
Ruel: No, before you draw, I'm gonna Gigadrowse those four lands.
Komura: But that leaves me with no White mana!
Ruel: Genius!
Komura: I think I'll Cranial Extraction you for that.
Ruel: Mana Leak is a good card.
Komura: Grumble, grumble.
Ruel: This is where you pay three mana.
Komura: Grumble, grumble.
Ruel: Oh, you don't have three mana? Lucky!
Komura: You're mean.
Ruel: I got a land.
Komura: I'm gonna play that Ivory Maskagain.
Ruel: I see.
Komura: Resolves? Great. Speaking of 'great', here is a Greater Good. I like enchantments.
Ruel: I don't.
Komura: Why didn't you stop them then?
Ruel: I got a…
Komura: A land, yeah, yeah. I got that.
Ruel: A land? Yeah, so did I.
Komura: You're a funny man, I'll play another Extraction.
Ruel: And I another Remand.
Komura: Yosei?
Ruel: Err… Boomerang the Greater Good.
Komura: So Yosei hits?
Ruel: Seems that way. I got a land.
Komura: Okay, I'll…
Ruel: No, before that, I'm gonna Gigadrowse the ever-loving heck out of your lands again.
Komura: What, nine of them?
Ruel: Yes.
Komura: Okay, watch my hands, this is not a trick.
Ruel: I'm watching.
Komura: Something complicated with a Sensei's Divining Top, culminating in a Putrefy on my Yosei.
Ruel: I'm kinda tapped out here.
Komura: Goryo's Vengeance.
Ruel: I wonder what's in my sideboard…
Komura: Gifts Ungiven.
Ruel: really curious about my sideboard.
Komura: I'll get Yosei, Reclaim, recollect…
Ruel: I scooped already, get over it.
Judge: There are 14 minutes left in the round.
Komura: !
Ruel: !

Leading into the last game, the game for most of, if not all of the marbles, Ruel kept his hand, and Komura threw his baby fish back in search of a larger one. The next bite didn't seem much better, and it showed on Komura's face. He eventually decided to keep the six and managed a Divining Top on his first turn, and a Sakura-Tribe Elder on his Second.

Unfortunately for Komura, Ruel made a turn two Kami of the Crescent Moon. Without a Howling mine or at least a Howling Mine derivative, Ruel's deck can struggle somewhat to get where it wants to go, as evidenced in Game 2. This time, Komura tried to make use of the extra cards with the help of his Divining Top by filling up to eight so he could make a Yosei-sized deposit in the graveyard bank for later.

"How many cards?" Ruel asked, making sure he was following his desired game plan.
"Seven."

Seven being the magic number needed to bring the dreaded Owl online. Ruel played the Owl and passed it back to Komura, who then dropped his hand size by one with a Goryo's Vengeance on the Yosei at the end of Ruel's turn. Because the point at which the end of turn triggers go off had been and gone, Komura's Yosei stuck around well into his turn, and flew on over to meet Ruel. 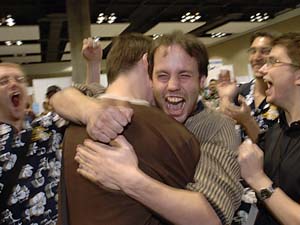 "Hi, Antoine? Antoine Ruel?"
"Yes?"
"Great! Pleased to make your acquaintance. My name is Yosei and today's special offer is five to the face."
"I'd really rather not."
"But I insist, it's on the house, even!"

For the follow-up, Komura tried for a Greater Good. If this landed, it would allow Komura to eat his Yosei, tapping down Ruel and allowing him to dig that much closer to something that would continue the lockdown chain. Ruel was even less impressed with this idea than he was by a special delivery from Yosei, and had a Remand ready to make sure Yosei was removed from the game at the end of the turn by the Goryo's Vengeance.

Komura was almost out of steam. The Owl engine was coming online and threatening to make things very uncomfortable for the Pro Tour Nagoya winner. He tried the one remaining out he had left, his Ivory Mask… and it resolved! Could this be it? Could Komura be advancing to the Top 8? No, Ruel played out the Boomerang to not only remove the Mask from play, but further increase the size of Komura's grip. Knowing it was all but over and not wanting to prolong it any further for his friend, Shu Komura offered his hand to Antoine Ruel, who now advances to the Top 8 to join his brother, Olivier.