Round 16: Yasuhiro Doiuchi vs. Itaru Ishida 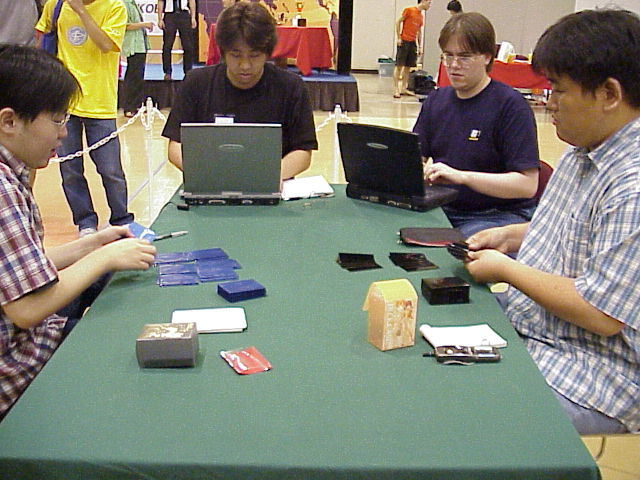 More and more spectators massed around the Feature Match area, as Top 8 spots were on the line. Tokyo's Itaru Ishida's controlling White-red-blue deck, called by some the "Patriot" (though not in Japan), represented the Superego, hoping to quash the motivated Ego of Yasuhiro Doiuchi's Go-mar. The stakes on the line are nothing less than hundreds of dollars and a Pro Tour invitation.

Doiuchi's popular rock crushed Itaru's scissors, and earned him the right to play first. His turn 2 Spectral Lynx was Repulsed two turns later, and he lost the opportunity for quick beats. Ishida refused to play any non-land permanents, and failed to draw a 5th land, discarding 3 Prophetic Bolts in a row. Doiuchi took the time to build up to 9 mana and Fact or Fiction into a pair of Absorbs, solidifying his position . Ishida didn't show any emotion, but he knew that his chances for a win would be very slim indeed.

Resolved not to let Ishida hog all the glory, Doiuchi joined in the discarding action with a Rout and Lynx. On his next turn he played a new Lynx, who prompted both players to start throwing out countermagic. Doiuchi won the 4 card war and managed to play a second Lynx the following turn. Ishida saw that if he didn't get a grip on the situation, the game would end very quickly. Ishida kept drawing counters, but lacked the mana to cast more than one at a time. Doiuchi clamped down on every removal attempt to destroy the Lynxes, and in the end, a single Lynx accompanied by a belated Dromar, the Banisher managed to drive the last 2 points home.

Ishida had the advantage going into game 2, having swapped in his aggressive creatures. He started off with a Meddling Mage naming Vindicate. The Mage swung into action and pummeled Ishida down into the single digits. Aching for a Dromar's Charm or Spectral Lynx that would actually resolve, Doiuchi Lobotomized and carved Exclude out of Ishida's head, but that did little to stop the furious Mage. Doiuchi finally drew a Lynx at 6 life and Lobotomized with three mana open to clear the way. Seeing an Absorb, Urza's Rage, and Prophetic Bolt, Doiuchi had no answer to the onslaught and was burned out.

Twenty minutes remained on the clock as Doiuchi started. He played a turn 3 Meddling Mage naming Repulse that was met by Ishida's Meddling Mage naming Spectral Lynx. Doiuchi missed his turn 4 land drop, compounding a lack of access to black mana. He found it on turn 5 after Opt revealed a Salt Marsh, and Vindicated Ishida's Goblin Trenches, but not before Ishida called forth two multihued lackeys.

The tokens stayed back on defense while Ishida's Mage hammered Doiuchi down. After a standoff, the two Mages traded, and it was now the Goblin Soldiers' task to bring the pain to Doiuchi for their master. Their dirty work hauled Doiuchi down to 6, who Fact or Fictioned in his great need.

Acquiring a Dromar, the Banisher and some land over a pair of Excludes, Doiuchi dropped the Legendary Defender. Ishida interjected with Evasive Action, Doiuchi Gainsayed. The Legendary Dragon posed a huge threat to the lifespans of the dwarfed tokens. That is, until Ishida played not one, but TWO Lightning Angels, stirring this American reporter's heart, and sent the lot to knock Doiuchi to one. Doiuchi had no answers, and Itaru Ishida advanced to the Top 8.