Richard Bland has had quite the trip to the USA. The Englishman finished second at Grand Prix San Diego, and has followed up that finish with a run at Worlds that leaves him needing two wins out of the next three rounds in order to make top eight. Considering that he started Day One at 1-3, this is no easy feat.

His opponent Ian Wood of Australia is in similar position for the tournament. While each has room for a loss, neither would be keen to have to win out in the dying stages in the tournament. 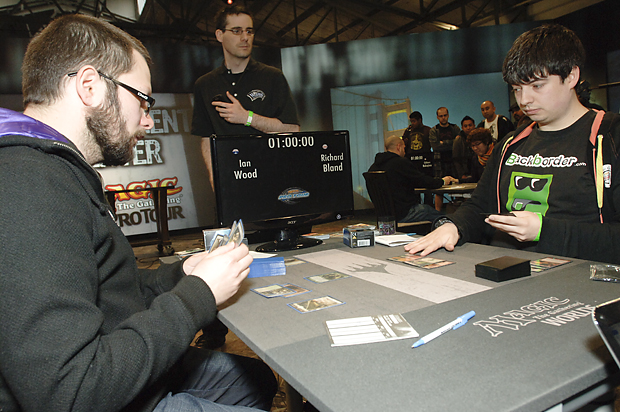 Both decks are Zoo, but one of them has a surprise for the mirror match!

Both players had Zoo as their weapon of choice for the Modern format, certainly a popular decision today. It was Wood who was on the play, leading with Arid Mesa into Temple Garden, for a first turn Noble Hierarch. Bland had just an Arid Mesa for his first turn, and looked on as Wood followed up his Hierarch with a Qasali Pridemage.

Bland's Arid Mesa found a Sacred Foundry tapped, keeping the Englishman ahead on life, at least initially. He had a Misty Rainforest for a Forest, and cast a Punishing Fire to take out Noble Hierarch. Bland had expressly tuned his version of Zoo to be good for the mirror, a match he expected a great deal of. Having dispatched Bing Luke in a Zoo mirror earlier, he looked good to keep doing well in the matchup, dropping a Grove of the Burnwillows on the table almost nonchalantly.

When Bland tried to off Qasali Pridemage with Punishing Fire, Wood responded by taking it out himself with a Path to Exile, eager to get more lands into play. He found a Plains, and on his turn cast a Tarmogoyf, one of the few creatures that would not be impacted by the Punishing Fire plan in a big way.

Bland's plan for Tarmogoyf was simple. He cast his own, along with a Wild Nacatl. This simple plan was met with a simple Path to Exile. Bland would probably have preferred to have a monster on the board, but he didn't have that option. Wood cleared a path for Tarmogoyf using a Lightning Helix on Wild Nacatl, before playing one of his own. When Bland returned Punishing Fire, it put the life totals to 22-11 in the Australian's favor. 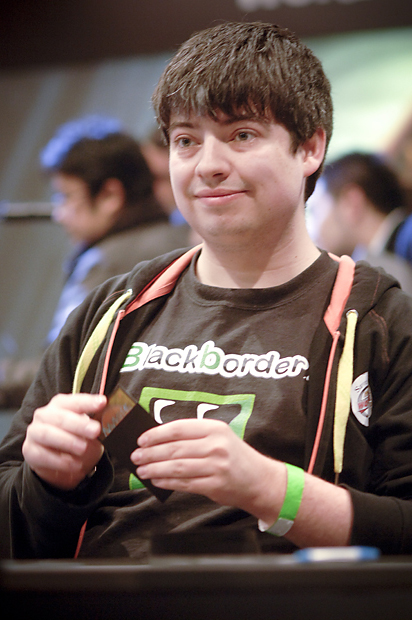 Richard Bland's Punishing Fires have been putting in work against his Zoo opponents coming in to this round. Would Wood be able to combat the fiery synergy with the Zendikar red spell and Grove of the Burnwillows?

Bland cast the first Knight of the Reliquary of the match (a 5/5) and then a Tarmogoyf (a 3/4). The Englishman wasn't about to lie down to the Australian assault. Wood had a third Path to Exile, and used it on Knight of the Reliquary. Bland now had enough mana available to start casting multiple copies of Punishing Fire a turn, and having returned the Fire already, it seemed likely that he would do so while Tarmogoyf wasn't too big.

Attacks took Bland to 7, and a fetchland made it 6. Bland had a second Grove of the Burnwillows, but it was unclear if he would have time to best employ it. After a little thought, Bland cast a Qasali Pridemage and passed.

Wood had Elspeth, Knight Errant, which forced Bland to use his Punishing Fire on Wild Nacatl twice to keep it from flying in. Bland then double blocked Tarmogoyf to let the two creatures trade. Suddenly the board was looking a lot clearer, and Bland compounded this by attacking and burning out Elspeth, and killing off Noble Hierarch.

The tide looked to have turned, but Bland was still on just 6, while his opponent was on 20. A Lightning Helix put Rich on just 3. Wood had a Knight of the Reliquary , which ate some Punishing Fire, and Bland set to attacking that big number before Wood could find a burn spell. Stirring Wildwood and Elspeth helped that clock greatly. Soon Wood was on 11. The Australian drew for his turn and...didn't have anything. It was on to game two.

Going into the second game, Wood had to take a mulligan, and lamented not having Punishing Fire in his deck. Given the way that the field at the top tables looks, it would have been a great choice. Wood led with an Arid Mesa, while Bland had a Stomping Ground for Wild Nacatl. Wood was quick to kill off the cat with a Lightning Bolt before it got a chance to start swinging. Bland was a little slower in dealing with Tarmogoyf, taking one hit before he found a Path to Exile to stop all of that nonsense.

A 4/4 Knight of the Reliquary from Bland outmatched the 3/3 one that Wood could muster, though the Australian did have a Scalding Tarn at hand if he decided he needed to pump it. That need came along quickly, as Bland pointed a Lightning Helix at it. He followed up with a Knight activation, to fetch and use Arid Mesa for a Mountain. Suddenly Bland's Knight of the Reliquary was a 6/6, and to cap it off, he had the Punishing Fire to finish off Wood's Knight.

With each passing play it looked less likely that there would be a Wood and a Woods in the Worlds Top 8. A Grove of the Burnwillows let Bland start getting back his Punishing Fire, right on time to fight off an Elspeth, Knight Errant. Wood had a Wild Nacatl, but Bland had a second Knight of the Reliquary. Rich's knights got to work on filtering through the lands in his deck, making them each into 7/7 monsters. 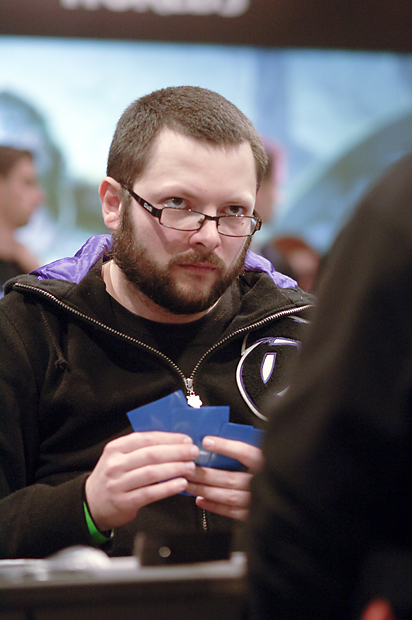 The dream of a Woods versus Wood match-up in the Top 8 is slowly disappearing.

Knowing he was out of cards in hand, and facing insurmountable pressure, Woods extended his hand. "You've got it man."

4 Knight of the Reliquary 3 Dismember 2 Threads of Disloyalty