Round 17: Andrea Santin vs. Eugene Harvey 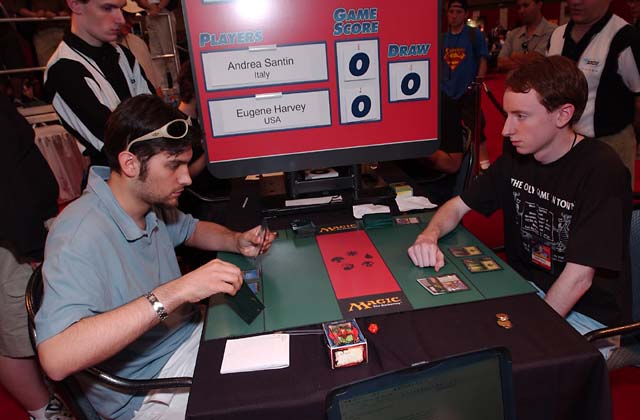 Santin mulliganed his opening hand. Harvey played Wall of Roots on turn two. Santin answered back by playing Powder Keg. Uktabi Orangutan was summoned, and smashed the Keg. A Llanowar Elf was also played, accelerating Harvey's mana even more. On the next turn, Harvey played Masticore, and attacked for three with the Elf and Orangutan. Santin was doing very little, as he simply used Impulse on end step, played a land during his turn, and was done. Harvey attacked for seven damage with his team, and Santin played another Keg.

The next attack brought Santin down to three life points, and he desperately needed to find an answer. He added mana to his pool and played an alternate casting cost Gush, followed by Stasis. To say that this got the job done would be an understatement. Santin had three untapped islands in play, and was holding two more, so Stasis wasn't going to go away anytime soon. The only option for Harvey was to sit back, and hope the Stasis went away, or that Santin would make a mistake. Things looked even worse when Santin dropped Claws of Gix, which would allow him to break out of Stasis lock on end step. He didn't even need it just yet, as he played Boomerang to bounce Stasis back on end step, and replayed it on his turn. In the process, he untapped all his lands, ensuring that Stasis would be around for a while.

Harvey played an Elvish Lyrist, which resolved. Santin used his Keg at the end of the turn to kill it off. At this point, the game became a staring match. Harvey didn't play anything on his turns, and instead accumulated plenty of mana. If he wanted to break out of the lock, he would need to play multiple threats in one turn to work his way around free countermagic such as Force of Will and Thwart. This was not very exciting to watch, and Santin noted how boring the match was at times. 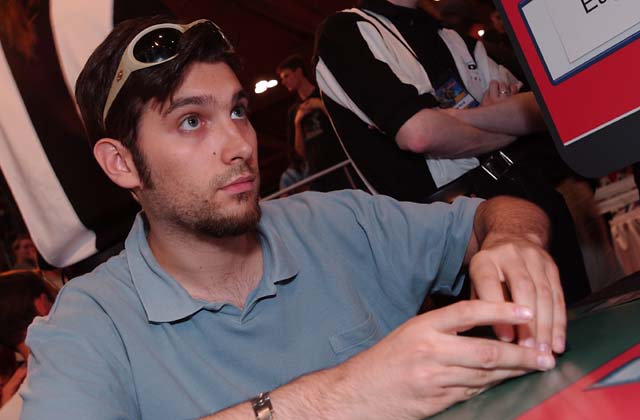 Santin eventually played a Morphling, and Harvey realized he needed to act immediately. He played a Lyrist, which was Counterspelled. A second Lyrist was Counterspelled as well, and was followed up by Natural Order, which was countered with Force of Will. This left Santin with only one untapped land, so he sacrificed the Stasis to the Claws and untapped everything on his turn. The Morphling attacked for five, and another Stasis hit the table. Harvey tried to eliminate Stasis with Creeping Mold on his turn, and Santin responded with Impulse. He then added Thwart to the stack, and Harvey conceded.

This time, it was Harvey who mulliganed his opening hand. He still started off with a first turn Lyrist, which goes a long way against Stasis. He exploded on turn two, with Wall of Roots and Fyndhorn Elves. Harvey played Choke on turn three, which was Counterspelled. Spike Feeder joined Harvey's team, and the Lyrist and Elf attacked for two. At this point, Harvey only had one card in hand, and not much of a clock out. With the Lyrist tapped from Harvey's attack, Santin added mana to his pool, cast Gush, and played Stasis. The Lyrist was now tapped down, and could not help Harvey. 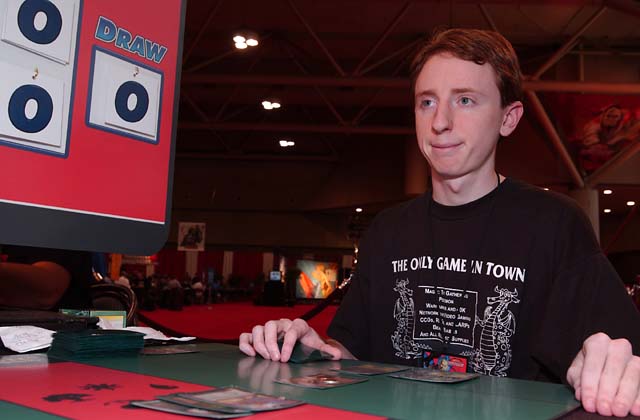 However, Harvey had Emerald Charm, which he used during his main phase to destroy the Stasis. This left him with no cards in hand. Santin then took his turn, and tapped all four of his lands to play Masticore. It attacked on the following turn, dealing four damage. Harvey attacked back with his team. Masticore shot down the Lyrist, and Harvey moved a Spike counter onto it in response. In response to that, Masticore shot it again, so Harvey moved another counter onto the Lyrist. Adding even more to the stack, Santin played Submerge on the Lyrist, and ended up taking two damage. Harvey played another Feeder, and ended his turn.

Masticore attacked once again, and shot down an Elf. Santin used Gush to draw more cards, which would allow him some space to manage the Masticore's upkeep cost. It continued to go to work, shooting down Harvey's Elf. Santin added another shot to the stack, and Harvey responded by moving another Spike token. This made the Elf 3/3, and it survived the Masticore, getting through for three damage. At this point, Masticore had wiped away all of Harvey's creatures, with the exception of the 3/3 Elves. Harvey realized he had no way to win, and conceded.