Well, well, well! What an interesting match we have here. While it may not have been apparent to you at first glance, there was quite the story brewing when the pairings came out for this penultimate round of Worlds. While neither of these players may be household names, they've thrust themselves into the forefront of some very interesting races.

First, we had Janus Kofoed. After finishing second at Danish Nationals this year, Kofoed had a mere eight pro points on the year. Due to an exceptional performance in both the individual and team rounds here at Worlds, however, he has put himself in position to potentially win Rookie of the Year. With the current leaders, Fabian Thiele and Mattias Hunt, both out of contention for more points, and Sveinung Bjørnerud unable to make Top 8, Kofoed is in a unique position. Should he complete his run to top 8 and finish well on Sunday, as well as hurdle Japan and end up playing Bjørnerud's Norway in the Team finals, Kofoed could win the Rookie of the Year having not picked up any points until Nationals this year.

To my right sat David Caplan. After completing a 6-0 run in the Standard portion of Worlds, Caplan scooted off to the Magic OnlineChampionship, where he is a competitor. That's right, he's spearheading the contingent of MOCS players that are crushing the top tables of Worlds. In addition to the six rounds of play for Worlds, each of the MOCS competitors put in four rounds of play in the evening, requiring some severe mental endurance. Despite this incredibly heavy workload, Caplan is still excelling, and playing against competition this tough can only help prepare him more for the Modern portion of the MOCS, starting just after next round. 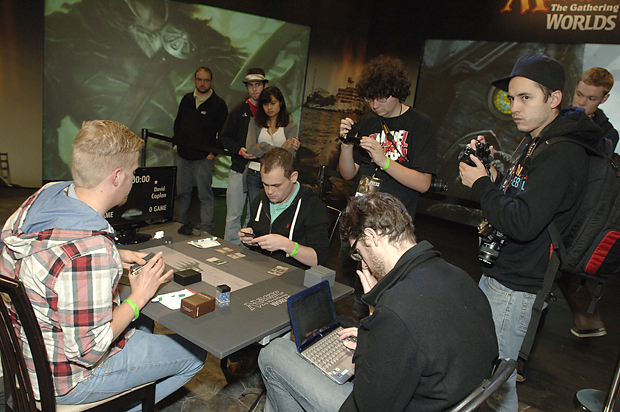 Magic Online Championship competitor David Caplan squares off against Janus Kofoed, who may have a shot at Rookie of the Year if he Top 8s.

Caplan started things first, cracking an Arid Mesa to fetch a Hallowed Fountain. It came into play untapped, effectively Lightning Bolting himself. He played a Loam Lion, displaying his Zoo affiliations. Kofoed revealed that he too was an animal lover, with a 2/2 Wild Nacatl, thanks in part to a Temple Garden. Caplan played a Stomping Grounds and attacked, his 2/3 waltzing past Kofoed's 2/2. After combat, he made a 3/3 Wild Nacatl of his own. Kofoed made a Stomping Grounds of his own, powering up his Wild Nacatl and swinging at Caplan. Kitties traded, and Kofoed replaced his after combat. 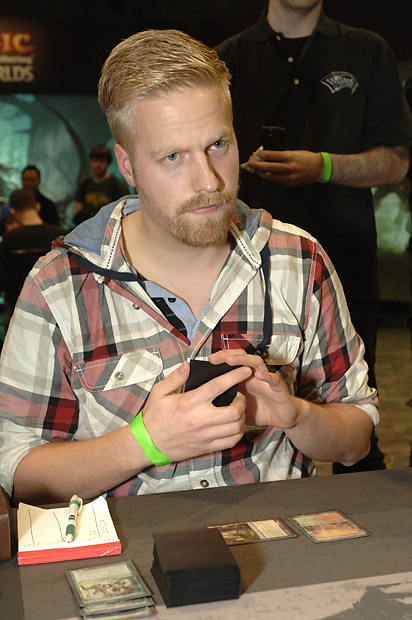 Kofoed trades cat for cat, hoping his Zoo deck will come out on top.

Caplan untapped and played a Lightning Bolt on Kofoed's lone Nacatl, clearing the way for his Loam Lion. To bolster his team, he made a Tarmogoyf and passed the turn. Kofoed didn't let the Tarmogyf see a combat step, using a Path to Exile to permanently deal with the best two-drop ever printed, arguably (but not really). Even still, his double mulligan to start the game had left him depleted of options. He could do nothing as he watched his life tick away in the next couple of turns, and Caplan rode his Lion and a hint of burn to a win in the first game.

Kofoed was the first to play this game, dropping a Birds of Paradise into play on the first turn. After a pair of mulligans himself, Caplan started out with a Wild Nacatl. Kofoed put his Birds of Paradise to good use with a second-turn Rhox War Monk, which Caplan correctly predicted. When Caplan calmly untapped and played Deathmark on the Monk, it looked as though Kaplan might have baited Kofoed into playing the Monk, though it's unlikely that there was a better play. Kofoed tried to replace his men, but each time, Caplan had an answer. First, Wild Nacatl met a Lightning Bolt. Then a second War Monk met the same Deathmark, thanks to a Snapcaster Mage.

"That was a pretty good mulligan to five," Kofoed said, sounding legitimately impressed.

"It's the best I could have hoped for." 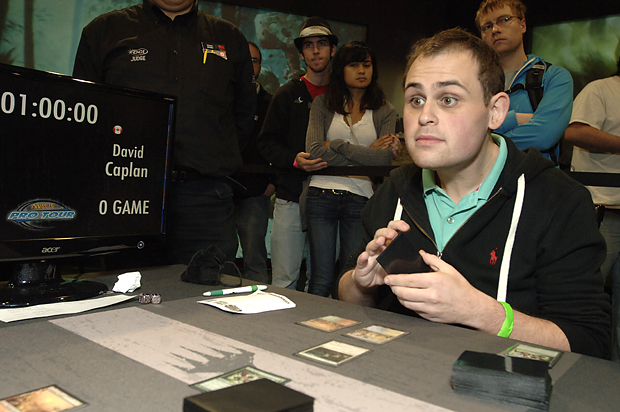 Caplan mulligans to five, but that's not slowing him down against Kofoed's Rhox War Monks.

Kofoed was on the back foot now, slowing the bleeding some with an Oblivion Ring to stop Wild Nacatl, but Caplan still had the Snapcaster to beat down. As Caplan pressed the attack, Kofoed's life dwindled. The final spell was cast soon thereafter, as a Lightning Helix finished things off, giving Caplan the win on a mulligan to five, and most likely securing him a berth in the Top 8.