Round 17: Dutchies Battle with Top 8 in Sight

two players chattered on in Dutch for a good while before the match started. Being an ignorant American, I couldn't understand a word they said. However, I do have something in Dutch to say to all of you.

Postema then asked me to give a shout out to his sponsor, ManaMaze. I told him only if he buys me dinner. I think he agreed, but how should I know? I don't speak Dutch! 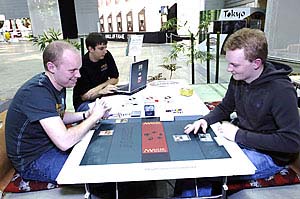 Postema and Karsten share a laugh. Paul is left out of the joke.

Karsten is playing the awesome CAL (Confinement/Assault/Life) concoction, while Postema has brought Boros Deck Wins, and they are both in great shape to make Top 8.

Karsten started off with the turn-one Birds of Paradise and Postema happily picked it out of the sky with an end-of-turn Lava Dart, then followed up with Kataki, War's Wage. Karsten played a turn two Sakura-Tribe Elder and Postema grimaced. He untapped, played a third land (knocking himself to 15) and added Silver Knight and Savannah Lions. Karsten thought about sacrificing his Elder but decided it would serve him better in play. He just played a third land and passed the turn back.

Postema's creatures crashed in and the Elder blocked Savannah Lions, with Putrefy being aimed at Silver Knight. Karsten fell to 18. He searched up a Mountain, with his mana base now having one each of four different land types. Postema tapped three for Pillage and paused, shaking his head. Karsten just grinned. Postema took down the Forest, correctly worrying about Life from the Loam. 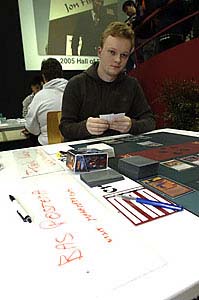 You sure you want to keep playing?

I might have floated a mana, flashed back Lava Dart to clear out the Elder, and then Pillaged before attacking so as to attack for four and keep an extra creature, but what do I know? To be fair, he didn't have another land in his hand. And anyway, he owes me dinner.

Karsten cycled some lands and searched up a replacement Forest with Wooded Foothills. Postema drew a land (see!), sent Kataki in for 2 and Molten Rained Karsten's new Forest. Karsten cycled some more (doesn't he have anything better to do?) and eventually placed down a Tranquil Thicket.

Postema, having drawn another land, could only attack for two. On Karsten's turn, more cycling plus a Life from the Loam spelled bad news for Postema. Frank played a new Elder, which fell to the flashed back Lava Dart, and Postema hit for another two.

That would be all though, as Frank had the Solitary Confinement and locked up the game at 11 life.

Frank said something in Dutch and Postema considered, then nodded. They called a judge and announced that they wanted an intentional draw. It appears that before the match, Karsten asked for a draw, but Postema is a point behind in the standings and wasn't sure if that was enough. He decided to play, but after being down a game against the tough CAL deck, changed his mind.

Karsten, ever the gentleman, gave him the draw.