Round 17: Justin Gary vs. John Ormerod 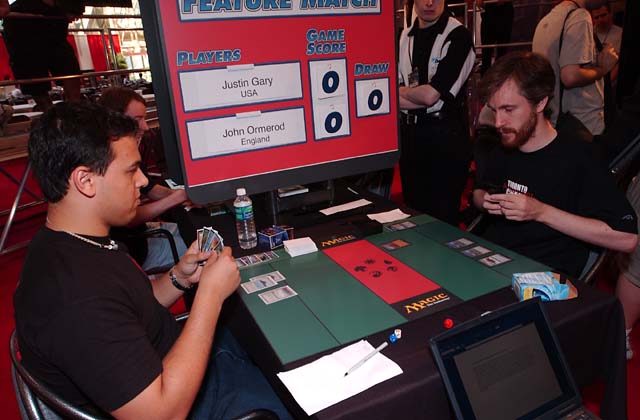 After a bit of conferring, Justin and John agree that they have a lifetime record of 2-1 in favor of John, so Justin is looking to even up the score in this match today. Justin won the right to play first and was forced to take a Mulligan, and John got to keep his first. Justin played a pair of Tropical Islands and a Trade Routes, while John had just an island. John had the Force Spike for the Routes, which Justin allowed. John then played a second-turn Thawing Glaciers, while Justin had a Flood Plain on his next turn but nothing else. John untapped the Thaw and played another island, and he passed the turn only to have Justin Impulse before untapping. Justin played and used a Wasteland on the Thawing Glaciers, which fetched an island on its way out. Justin had no other play, though, so John played a Wasteland on his next turn. At the end of that turn Justin played Brainstorm. During his upkeep Justin then sacrificed the Flood Plain to get a Tundra, shuffling the less-ideal two cards back into his deck. Justin continued his turn only to have the Tundra Wastelanded during the draw step, and Justin played Gaea's Blessing targeting Trade Routes, Tundra, and Wasteland. John used Forbid without Buyback to counter the spell, to which Justin used Force of Will (removing Counterspell). If Justin thought it was that important, though, John felt likely to concur, and so he also used Force of Will, removing Force of Will from the game. John took his next turn playing nothing, and Justin played Flood Plain on his next turn. At the end of that turn John used Brainstorm, then untapped and played Dust Bowl.

John, under some control pressure thanks to controlling only vulnerable lands, passed the turn, as did John. Justin played another uneventful turn only to have John Impulse at the end of his turn, and John played a Forest on his following turn. Justin certainly seemed like he was in trouble, as once again he did nothing, only to have Dust Bowl eat a Tropical Island. John then passed the turn again, and Justin used the Flood Plain to get a Scrubland, followed up by a Duress, revealing two Force Spikes, two Forces of Will, a Counterspell and a Nevinyrral's Disk. Justin takes the basic Counterspell, then a Treetop Village. Treetop gets hit with Dust Bowl at end of turn, then John untapped and did nothing, while Justin drew and played a Flood Plains. John was without a play, and so Justin's Powder Keg resolved. John drew an island finally, playing it of course, and Justin played another Flood Plain on his next turn. Justin attempted Oath of Druids and it resolved, while the same was true of John's Nevinyrral's Disk. Justin played another Tropical Island while John drew Thawing Glaciers, and John passed the turn easily enough. Justin untapped and cast Brainstorm, then Impulsed past the cards, following the turn up with a Wasteland on the Thawing Glaciers. At end of turn John used his Disk to clear the Oath, and John drew a Wasteland as well, destroying the Scrubland. Justin passed the turn, in which John played an island, and during his next turn Justin used Flood Plain to get into play an Underground Sea, followed by another Duress, which John meets with Counterspell. Justin played a second Oath at that point, while Justin wasn't dealing damage through the attack phase. John used Dust Bowl to destroy Bad River, and otherwise got lucky enough to draw and play his third Thawing Glaciers. Justin passed the turn, while John did the same, but with an untapped Thawing Glaciers fetching an island. John played another Thaw and discarded Masticore, and while Justin had no play, getting rid of his last Tropical Island didn't make life fun, and the Thaw found a Land to use up. With no serious chance to come back out of this game, Justin conceded for time purposes. 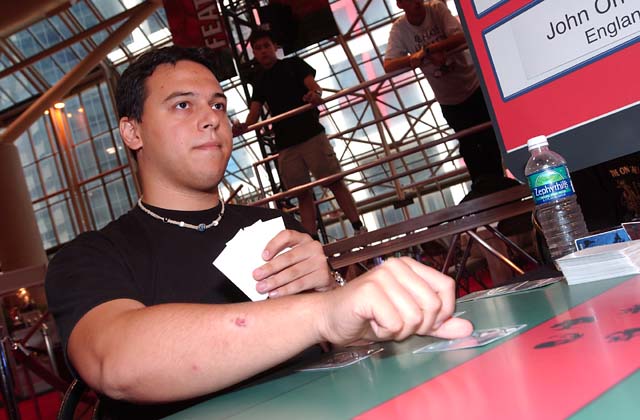 After the fact, it appeared obvious to both players that it was an incredibly good Force Spike. Justin chose to play first for the second game as well, and both players got to keep their hand. Justin started with a Bad River, and John with an island, while Justin's second land was a Flood Plain. John had a Dust Bowl available on his second turn, while Justin played a Treetop Village on his third. At the end of his turn, John cast Impulse, and Justin responded by finding a Tundra, then a Brainstorm, before Impulse resolved. John had another island on his third turn, but no play, while Justin used the Flood Plain to find Underground Sea and shuffle away the Brainstormed cards. Justin then played Duress on his next turn, and Justin got to choose between two Thwarts, a Force of Will, and a Counterspell, with John having an island and Morphling in hand. Justin took the Force of Will, then played a Wasteland and used it on the Dust Bowl. John used his Wasteland to kill Treetop Village, but Justin had another Bob-town to play on his next turn. John played a Brainstorm at the end of Justin's turn, and another Dust Bowl. Justin played a Scrubland and Duress on his next turn, this time taking a choice from Brainstorm, Forbid, Counterspell x2, Thwart x2. Justin selected the basic Counterspell and ended his turn, so that John used the Brainstorm in his search for land. John played an island and was done, while Justin played Flood Plain and likewise was finished. 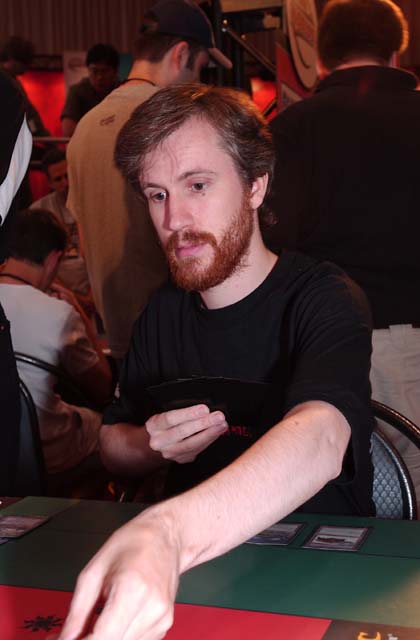 Gary tried a Spike Weaver, and John had to think quite hard about letting it in, then used Counterspell to stop the Weaver, which Justin played as well. John Forced the Weaver, and Justin Forced back, but John Thawed out a third island and Thwarted the Force. John re-played some lands, while Justin attacked with the Treetop and played a Flood Plain. John drew and used Wasteland on the Treetop Village, and Justin was visibly out of gas, with the top of his library versus John's full hand (some of which, at least, are islands). Justin played Enlightened Tutor to get Sylvan Library, but John had the Annul and Justin remained out of gas. John's Dust Bowl was Wastelanded, but there were two Thawing Glaciers at work now, and John found a forest and used Gaea's Blessing on two Dust Bowls and a Wasteland.

John drew for the Blessing and played an island, while Justin played a Gaea's Blessing and it resolved to shuffle back in a trio of Treetop Villages... then cast the Seal of Cleansing off the top. John's position recovered with more Thaws, as he had now recovered entirely from his Thwart trick before, and with five minutes left on the clock it seemed apparent that John would not be able to lose this game, nor this match, in the time allotted. Justin finally drew a Treetop Village, and John had a Nevinyrral's Disk to try and interfere with the Village beatdown. The Seal of Cleansing mattered, killing the Disk, and the Village attacked John down to seven life. John main-phase Brainstormed, then played a land and Nevinyrral's Disk, and Justin's counterspell of the Disk was Forced. Justin beat for three with the Village, reducing John to three life, but then John's Disk untapped as did his in-control Lands. Brainstorm/Thaw tricks ensued and simulated a lot of card advantage, and time was called on John's turn, in all likelihood sealing the fate of the match. Justin attacked with the Village, and did not have another Village, but John certainly had a Wasteland, plus two Counterspells and a Morphling.