Round 17: Kai Budde vs. Gabe Walls 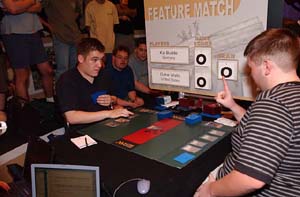 Any speculation that Gabe Walls was simply a "random" who lucked his way onto the U.S. National team should be put to rest by now. After sixteen rounds and three different formats, he finds himself one win away from the Top 8 of Worlds. Unfortunately for him, the man across the table is Kai Budde, the player you least want to face when your career has reached a clutch moment. Interestingly enough, this match may be even more important to Kai. His feature matches have been filled to the brim with spectators all week, and local media has been following the hometown hero all day. After getting this close, missing the Top 8 in front of his countrymen would be a huge disappointment.

Walls mulliganed his opening hand. Budde's Duress revealed a hand with lands, Reanimate and Sickening Dreams- Reanimate went to the graveyard. Budde cast Brainstorm on turn two, followed by Vampiric Tutor. He untapped and played another Duress, which Walls responded to with his own Tutor. Duress then resolved, taking Sickening Dreams and leaving Walls with a land and Phantom Nishoba. Budde waited to make a big move until he cast Cabal Therapy, naming Faceless Butcher. To his surprise, Walls had Tutored for Entomb instead. With no present danger of removal, Budde Entombed Verdant Force, and Reanimated it. For lack of any other options, Walls Entombed Akroma, and made a big production out of drawing his next card. 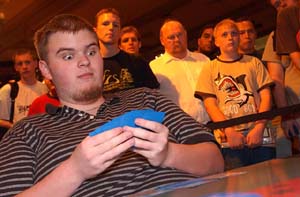 Walls- "Come on Exhume!"
Budde (sarcastically)- "You're on YMG. YMG never topdecks."
(Walls draws Exhume off the top, puts Akroma into play)
Walls- "That was masterful!"

At this point, Walls had gone from slumping shoulders and a look of defeat on his face to mocking Kai. It was another example of Walls's psychological strategy- when you get lucky, rub it in as much as possible to try and throw your opponent off his game. Budde's attack allowed Walls to go down to one life point. One more damage or Saproling, and Walls would have been forced to chump block Verdant Force with Akroma. The German's only out was Gilded Drake, and Brainstorm didn't find one.

Walls' Duress revealed Vampiric Tutor, Reanimate, Wonder and lands- the Tutor went to the graveyard. Walls followed up with Cabal Therapy to get Reanimate, but was stuck at one land.

Walls- "You're going to play that Wonder and just kill me." 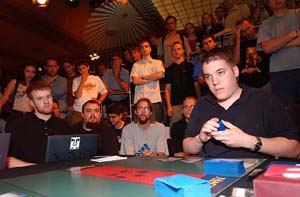 Regardless, Walls' plan to live for the moment was working, as Budde was drawing nothing but land, while Walls made his clock even more impressive with Phyrexian Negator. With his back against the wall, Budde went digging with Careful Study off the top, followed by Brainstorm. He Entombed Verdant Force, and Walls played to the crowd, begging Kai not to slow roll him. Indeed, Kai had nothing, but seemed to have fun making Walls sweat.