Round 17: Katsuhiro Mori vs. Antoine Ruel 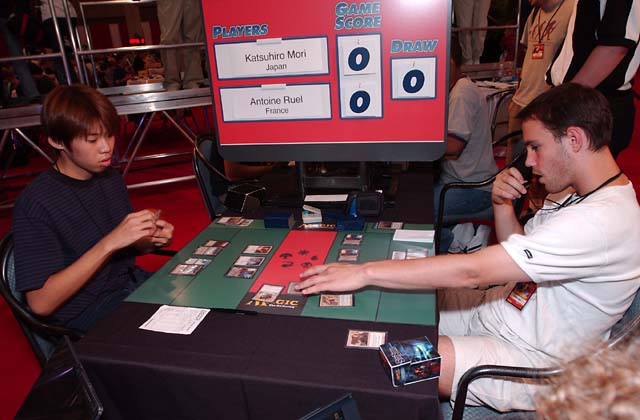 Katsuhiro Mori is making the run of his life. Just graduated from High School, the eighteen year-old Japanese player came to Worlds in close contention for the Rookie of the Year title. In the closing rounds of Day 3, not only is he the odds-on favorite for that honor, he is within striking distance of the Top 8. A win, and he can ID into Sunday.

He squares up against Antoine Ruel, France's best performer so far.

Mori led with Soul Warden, and Ruel came back with Mother of Runes. Mori swung with the Warden, trying to dispatch the Mother easily. When Ruel didn't bite, he took care of it with Swords to Plowshares.

Ruel made a Meddling Mage, preventing Paladin en-Vec. Mori took the fight to the shadows with Soltari Priest, and Ruel doubled-up on Mages, this time blotting out Cursed Scroll. The two traded hits. Mori Tithed out two Tundras and made a Warrior en-Kor.

Ruel continued to produce an all-star cast. He made twin Soltari Priests and passed it back. Mori brought down a Pikula of his own, stopping Mother of Runes, and swung with his Priest and Warrior. He got through for two, and both players lost their Priest. Mori made a Soltari Monk to fill the void. Ruel battled back for four with his Mages and mustered a Steadfast Guard and Ramosian Sergeant. He counted and realized that Mori's Soul Warden had given him eleven life. 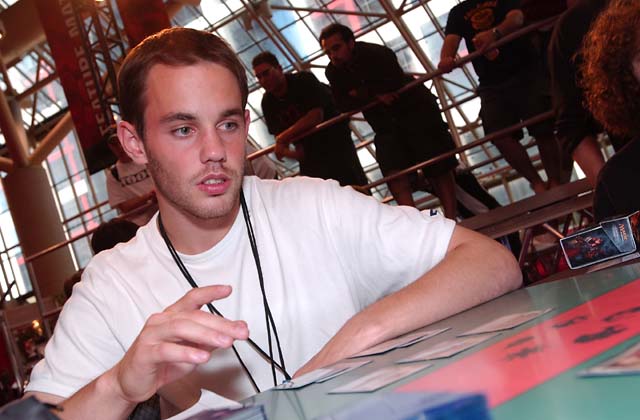 Mori thought hard on his next turn, eventually losing his Monk to Ruel's other Priest, Plowing the rebel searcher before it could come online, and laying a Seal of Cleansing. Ruel, with an empty hand, drew Tithe and passed it back. Mori drew and passed the turn. Ruel found a Tundra waiting for him and passed. Mori thought briefly before playing Armageddon. Ruel's misfortune had become a boon.

The two played lands back and forth, but Ruel had the edge with his Steadfast Guard and Soltari Priest. Mori sent his Mage into combat, taking down Ruel's anti-Paladin Mage. This freed him to play Mother of Runes. Unfortunately, Ruel was free to replace it with a new Mage, this one stopping Soltari Priest, as well as a Mother of his own.

Mori began taking his turns quickly, as his draws weren't cooperating with his two lands. The final Mage came down on Ruel's side, blocking Swords to Plowshares, but his overwhelming creature presence was the real problem. In the end, Mori had to peel a plains in order to drop Worship and stay in the game. He pulled Empyrial Armor, and scooped.

In game two Mori led off with a Meddling Mage preventing any more of its kind from entering play. Ruel Brainstormed on his second turn, and shuffled away the bad cards with Flood Plain. He Plowed Pikula in order to get his own into play. This one stopped Armageddon.

Mori had meanwhile made a Soltari Monk, and put Empyrial Armor on it to smash. Ruel took it and busted it up with Seal of Cleansing. He also made a trio of Cursed Scrolls. Mori tried the same trick again, but this time Ruel topdecked the plains that let him use the last card in his hand, Seal of Cleansing to scroll the Monk before destroying the Armor. It was downright sad. 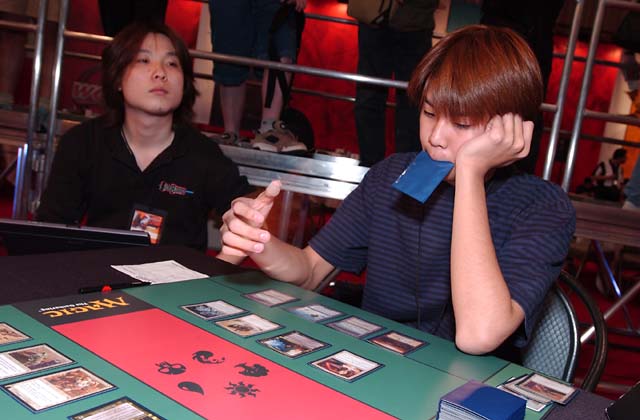 Mori played a pair of Seals of his own, and dispatched two Scrolls before Ruel could get more bang for his buck. Still, Ruel had an active Scroll, and soon a Mother of Runes for the "Beatdown." Mori's life cushion dwindled. When Ruel had three cards in hand, Mori risked a Meddling Mage to stop Swords to Plowshares, as well as a Mother of Runes. Ruel missed with the first Scroll attempt, but succeeded with the second. His Plow came down on the Mother. Mori used Enlightened Tutor to fetch Seal of Cleansing to stop this crazy train from going off the rails.

Ruel added a Soltari Priest, and things were looking grim. Mori's last shining hope was his ultra-techy Samite Archer. Ruel squashed his hopes with another Plow.

As the two shook hands, Ruel wished Mori the best of luck, saying that he was hadn't wanted to face him on the road to the Top 8.