Round 17: Keeping on Top of Tings 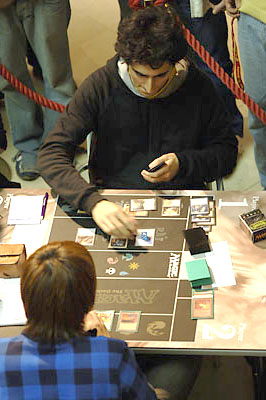 Round 17 the feature match area was graced with a pair of competitors with 10 Pro Tour Top 8s between them. With 6 to his opponent's 4, Gabriel was out in front, but there was a nod to Japanese Magic prowess in his deck choice. Nassif is playing AngelTop control, a deck piloted by Masashiro Kuroda at the Japanese 'Finals Competition' in the Extended portion on his way to victory.

Nassif won the roll and opted to play first.

"Nice start," he commented with a little smirk.

Nassif's good start continued as he had a solid keeper while Arita was forced to mulligan his opening grip. Gabriel's start wasn't as quick as his opponent's, facing down a first turn Savannah Lions with just a Polluted Delta, but Nassif was unconcerned.
Dropping an Izzet Boilerworks and a Plains with his first two land drops, Nassif's first business spell was Meddling Mage naming Firebolt. Arita took it in his stride and just kept on bashing, not worried about blocks, though possibly slightly more worried about his lack of a second land drop.

Gabriel meanwhile had a Trinket Mage to find an Ancient Den, keeping his mana well fixed. The mage (of the trinket variety) was taken down with speed by Arita, who finally found a second land and a Lightning Helix, but there was nothing that could stop Meddling Mage from swinging with a freshly equipped Umezawa's Jitte.

Arita effectively cleared the board with a Sudden Shock to kill Meddling Mage, which was soon followed by a removed counter to kill the lion. Nassif simply untapped and played another Trinket Mage, finding a Sensei's Divining Top, which he played.

Arita was now knocking on his deck with each remaining turn. He had a Firebolt for Trinket Mage #2, but was clearly not happy with his chances. When Nassif played a Silver Knight, a threat very tough for the Boros deck to take down, Arita simply scooped things up and went looking to his sideboard.

For Game 2 it was Nassif's turn to take a mulligan to six, on the draw against Arita. Ryuuchi again had a dog on turn one, though this time it was Isamaru, Hound of Konda.
This was followed up by a Grim Lavamancer from Arita, who was sending his team into the red zone while Nassif simply played land and passed.

With damage from dual lands coming into play untapped, Nassif was down to 12 before playing a spell, the Fire half of Fire/Ice to kill Isamaru. He followed this up with an Ancient Furnace and Pyrite Spellbomb. Ryuuchi's pace was not to be slowed, though. He played Disenchant on the new land, forcing Nassif's hand on using the spellbomb. Lavamancer got one shot in on the way to the graveyard and was then replaced by a new Isamaru. 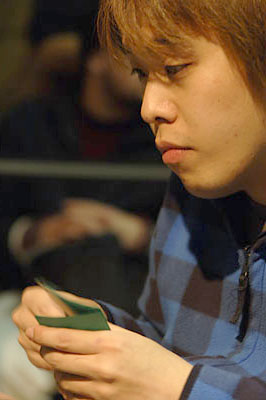 Arita does the math.

Everything was going to the face from Arita, as he threw out a Firebolt and continued to attack. Isamaru was dealt with thanks to another Pyrite Spellbomb, but on just 7 with an imminent flashback Firebolt, Nassif was on a clock, and he knew it. An Ice drew Nassif a card, and when the Firebolt was flashed back, the Frenchman had a Divert to try to get back in the race.

A morph from Gabriel quickly showed itself to be Exalted Angel, though unfortunately for Nassif, this was due to a Pyrite Spellbomb cutting short its time on the board. Arita had a Helix in response to a sacrificed fetchland to take Nassif down to just 3, and then he studied the Divert in Nassif's graveyard again.

He passed the turn, and at an opportune moment, played a second Helix in response to one from Gabriel, in order to tie the game.

On the draw for Game 3, Arita made a few more changes to his deck, and mindful of his opponent, Nassif chose to do the same.

He led with a Savannah Lions, while Nassif started out with lands and a Counterbalance that elicited a little chuckle from a nearby Aaron Forsythe. Arita had a Grim Lavamancer, which successfully made it into play, but was wrecked by a 2-for-1 from Fire/Ice. In the background, Aaron started doing a little 'card advantage jig.'

To back up his Counterbalance, Nassif soon had a Trinket Mage to find Sensei's Divining Top, making it increasingly unlikely that many of Arita's spells would resolve. Arita tried a Lightning Helix, and it met a Fire/Ice on the top of Nassif's deck. This led to a little bit of rules confusion. Neither player was 100% sure on what happened here. Both Randy Buehler and Aaron Forsythe felt that this was a fine counter, but neither player seemed so confident.

Next he tried a Firebolt, perhaps hoping to bait Nassif to put his Top back on top, or perhaps in a legitimate attack on the Trinket Mage. Arita had two lands untapped, and three cards in hand. Nassif decided not to fight this spell with Counterbalance.

Top spinning began, and Nassif put down another threat - this time a morph.

Arita's response was a lot of thought, followed by a confident slam of Fledging Dragon onto the board. Knowing what was on top of his deck, Nassif didn't fight the dragon. With Arita having exactly threshold, the undercosted Shivan Dragon looked pretty threatening front and centre of Ryuuchi's board. Suddenly Nassif didn't fancy attacking. 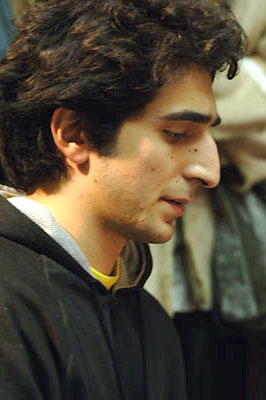 Gabriel Nassif is looking for his seventh Pro Tour Top 8.

Instead he passed his turn without play and looked on as a Molten Rain attacked one of his white sources. This forced the Exalted Angel (as the morph always seemed likely to be) to flip. The dragon swung through unimpeded, and Arita played a Firebolt at Nassif's head with a single card left in hand. Nassif, on just 7 after the big swing, was forced to use his Sensei's Divining Top to counter the Bolt just in case. He then tried to race with an Angel swing before replaying the Top.

Ice on the Dragon kept it at bay for the turn, but Arita now smelled blood and successfully played a Silver Knight in an effort to apply more pressure. Racing angels is tough, though, and with another Exalted swing Ryuuchi was down to 6, while Nassif had crept back up to 15.

A Pyrite Spellbomb was countered by Counterbalance, thanks to Stifle on the top, and then another Ice on the Dragon sealed things. Ryuuchi Arita simply extended his hand.

Gabriel Nassif wins 2-1 over Ryuuchi Arita, advancing to 37 points and needing a win and a little luck to hit his seventh Pro Tour Top 8.