Round 17: Raphael Levy vs. Cole Swannack 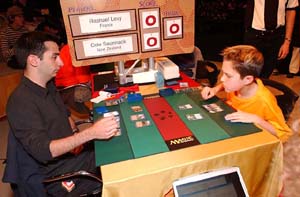 A thirteen year-old at Worlds is a novelty. A thirteen year-old who 5-1's Day 1 can be dismissed as lucky. A thirteen year-old who needs a win and a draw to make Top 8 is the real thing. Cole Swannack has taken everyone's expectations and turned them on their heads. The tiny New Zealand National Champ has fast become the most exciting part of the tournament. It seems like every pro rushes from their table at the end of a match to find out how he's doing. He's rebounded from an unspectacular 3-3 on the draft day to post 3-1 here in OBC. Now he just needs to beat Raphael Levy, and defeat his next oppontent.

France's Raphael Levy has been hanging around the top of the standings since the close of Day 2, but a 1-3 performance has jeopardized a Top 8 berth that seemed locked in. He needs this one as much as Swannack. Unfortunately, no-one will be cheering for him.

Levy won the die roll and naturally chose to play first. He made a forest and passed it back. Swannack overtrumped with Careful Study for Rootwalla and Wonder in the graveyard. Levy made a Mongrel and sat back.

Swannack played an island and dove in. Levy pitched a Wonder and ate the Rootwalla. Swannack had to content himself with an Aquamoeba. Levy got in with the Mongrel for two, and made a Seton's Scout.

Swannack was clearly struggling. He made a Hapless Researcher and cycled it, discarding another. A third Researcher sat on the board. Levy continued to hammer with Nimble Mongoose and Seton's Scout, this last countered by a Circular Logic through the Researcher. He swung in with Wild Mongrel, pitching Genesis.

Things were not in Swannack's favor. He sent the Aquamoeba and traded it for Seton's Scout in a double-block. Then he dropped forest and Wild Mongrel, leaving himself empty-handed.

Trade Aquamoeba for Seton's Scout, then drop forest and mongrel, empty-handed. Levy picked up his Scout and hit with the Mongrel for two. Swannack's Wonder wasn't going to do the job versus endless guys from Levy's side of the board. A mid-combat Mental Note to get to threshold was enough of a swing to earn his concession.

Shuffling up for Game 2, Swannack uttered the fateful word:

He had no play on turn two, while Levy busted out Wild Mongrel. Nothing again on turn three, and you could hear the disappointement in his voice. Levy brought out Werebear. 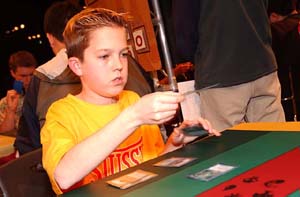 Things turned around in a hurry when Phantom Centaur hit the board for the New Zealander. Levy had no fourth land, and no island at all. He just shook his head and passed it back.

Swannack, meanwhile, pulled Mongrel off the top and pitched Wonder, putting Levy on a four-turn clock. Levy smiled as he ripped an island. Careful Study put Wonder in his graveyard, stabilizing his position somewhat.

He passed it back to Swannack, who punched for five. Levy stood at ten life. Wonder signed on as a 2/2 flier for Swannack. Levy untapped and hit with his Mongrel, pitching two more Wonders. Then he cast Breakthrough for two, leaving island and Werebear untapped. He kept Seton's Scout and Breakthrough, pitching Aether Burst and Nimble Mongoose. The Scout came into play.

Swannack, holding Aether Burst and three land, thought hard. He eventually chose to Burst away the Scout and Werebear, sending the whole team. Levy was forced to put his Mongoose in front of the Mongrel. Swannack pitched to save.

Levy rebuilt his forces, but it wasn't quite enough as Swannack ripped Elephant Guide for his Mongrel. He turned sideways, leaving Wonder at home. Levy doubled up on the Mongrel and sacrificed his Mongrel to the Centaur. He was left with just a Scout, against Swannack's board of Centaur, token and Wonder.

Breakthrough for three got him a Mongrel. This time the whole team jumped him. The Scout jumped the Centaur, and the Mongrel pumped and pitched to stay alive against the token, leaving Levy at one. Swannack put down another Mongrel. Levy drew, and scooped.

Swannack pulled up his first seven, and they were abysmal. He sent them back, and the relief Levy felt was apparent. His hand was great, and his opponent had just mulliganed. With so much on the line, he had to take a second and put his head in his hands. 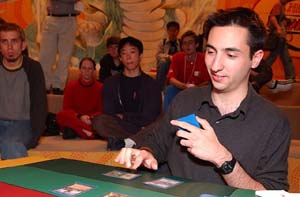 He opened with Nimble Mongoose and Wild Mongrel. Swannack answered with Aquamoeba. Levy pitched Wonder and attacked. Swannack pitched one of his own and then an island, killing the incoming Mongoose. It was replaced with a Werebear.

Swannack found a forest and made a Mongrel. Levy made a Mongoose and got to threshold in a hurry with Breakthrough for two. It pulled up three land and another Breakthrough, all of which went to the graveyard, leaving Levy with Seton's Scout and Breakthrough. He smashed for six and turned it over.

Swannack had just a Sylvan Safekeeper to add. Levy hit again. Mongrel and Aquamoeba conspired to take down Mongrel, after a pitch from each side. Levy assigned his damage to the Mongrel, and Swannack's last card, Aether Burst, made the save. Levy calmly put out a Scout.

He replayed the Mongrel, trading it and a pitch for Levy's Werebear. This time he had no play. Levy brawled again. Swannack practically caused Levy to fall out of his chair when he Madnessed an Arrogant Wurm through his Aquamoeba, trading the Aquamoeba for the Scout and eating the Mongoose with a Wurm.

"Who does that?" - Raphael Levy

But without any follow-through, he was hard-pressed to take advantage. Levy brought out a Spellbane Centaur. Swannack turned his Wurm sideways and held the ground with Hapless Reseracher to go with his Safekeeper.

Levy played a Scout, and then an Aether Burst on the untapped creatures, leaving himself empty-handed and forcing Swannack to sacrifice two lands. The Spellbane traded for both men, and Swannack activated it, turning over a Wurm he couldn't use.

His Wurm stayed home. The grim situation was made final as Levy ripped a second Burst to take the match.