Round 17: Roger Sorino vs. David Williams 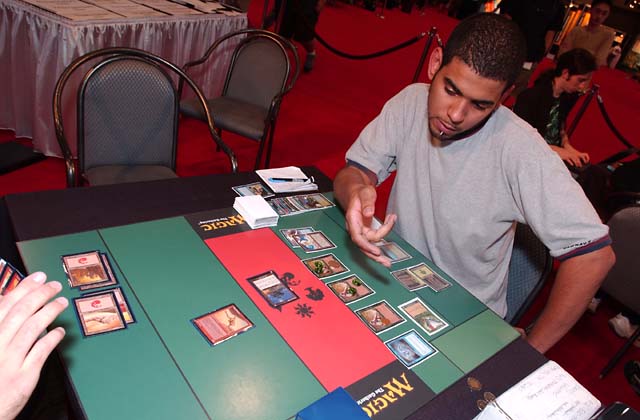 Roger Sorino is a New Jersey player with a hand full of Pro Tours under his belt, but no truly memorable finishes. He was looking to make a name for himself when he sat down across from Dave Williams for a round 17 Feature Match. The winner would probably be able to draw into the Top 8, while the loser would be forced to win and hope his tiebreakers were good. Sorino brought mountains and Jackal Pups to the table with him, while Williams is running a Squirrel Prison deck with Tradewind Riders and Ophidians, very similar to the one Mike Turian built and Kurt Burgner piloted to the Top 32 of the last Extended Pro Tour.

Sorino's draw wasn't very speedy - turn 2 Jackal Pup and a turn 3 Chimeric Idol that fell victim to Force of Will. Williams had a turn three Ophidian, but he only got to draw one card before Sorino removed it with Incinerate. After that Winter Orb iced the game up for a while. Wasteland deprived Williams of his only source of blue mana, but a trio of Walls of Roots bought him all the time he needed to draw more. Down came Tradewind Rider #1, down came Opposition, and down went Roger Sorino. 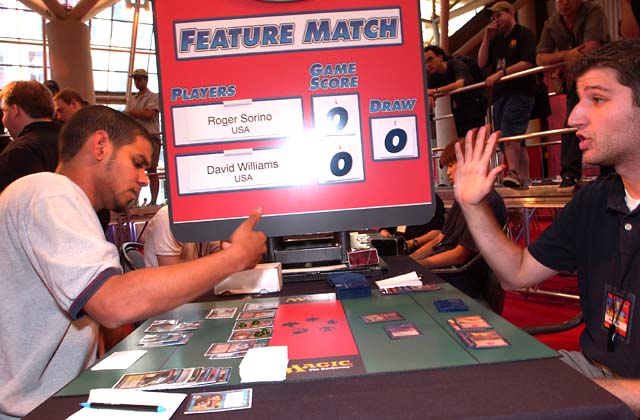 Sorino got his Jackal Pup on turn 1 in game 2, and Williams' 6-card hand only included one land. Williams did draw the land he needed to play Wall of Roots on turn 3, followed by another on turn 4. Sorino just shook his head, shrugged, and bounced a pair of Jackal Pups off the walls. Williams played Tradewind Rider and Sorino had no choice but to go for it. He sacrificed 2 lands to Fireblast the Tradewind. Williams countered with Hydroblast. Sorino then sacrificed his other two lands to blast the Rider off the board. Williams could only comment "your not gonna like my next turn," and then played a replacement Tradewind Rider. Sorino knew he was in trouble. Williams followed up with Opposition and then Tradewind #3. Sorino just stuck out his hand and conceded.

Both players agreed afterwards that Sorino just wasn't going to win this matchup. Most of the decks at the top tables seem good against Sligh. Both the creature decks and the control decks look capable of beating Sligh. To be fair, this was Sorino's first loss of the day and he's already taken out two white weenie decks despite their Priests and Warrior en-Kors, so maybe his Sligh can survive against these decks, but it looks to me like different creature decks are king: White Weenie, Secret Force, and Three-Deuce. 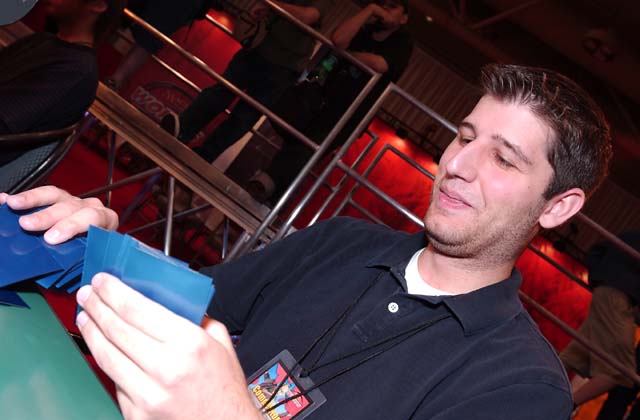 Williams seems excited about the possibility of drawing into the Top 8 mostly because it probably gives him a berth in the Magic Invitational. "I love fun formats. I wouldn't care if it was in Texas - I just love to game." It's actually in Cape Town, South Africa and the 16 coveted spots will all be determined soon. As will the Top 8 slots at Worlds. Look for Dave Williams to be gaming in both those events.