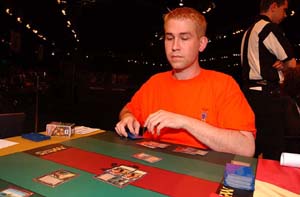 After "Good Man" Ken Krouner started the tournament 0-3, his playtest partner Mike Turian pulled him aside and told him that he was horrible and then he'd better get his act together.

Krouner showed Turian what was up over the next twelve rounds, winning all of them before falling to Germany's Mark Zeigner in round 16. Krouner now just needs one win in the next two rounds to make the Top 8. Not bad for his first Worlds.

His opponent has played in several Worlds, and has made two Top 8's and is the reigning World Champion. To top it off, the wiry Tom van de Logt has several inches on the 6'5" Krouner.

Krouner is playing a green/blue flashback deck with Catalyst Stones; the deck was given to Krouner by Brian Kibler last night. Van de Logt is playing a relatively standard version of mono-black control.

Krouner started with a Mental Note, and followed it up with a Werebear that was Edicted away. Krouner played a Catalyst Stone and another Bear, and van de Logt played out his own monsters in the form of a pair of Nantuko Shades.

A second Catalyst Stone came down for Krouner, but not a lot of business. The fact the van de Logt was playing a Swamp every turn meant the Shades would need to be chump-blocked soon.

Krouner cast a Grizzly Fate and flashed it back for 1GG, but all the bears did was sneak in a few points before dying at the feet of the attacking Shades. Krouner did manage to get van de Logt down to seven, and then cast and flashed back a Roar of the Wurm, putting the heat on Tom to come up with an answer. He Tutored for a Mutilate and held his breath.

Krouner attacked van de Logt down to one life, and the cast a Careful Study, discarding a Grizzly Fate and keeping a single card in hand.

Unfortunately for Tom, that card was Envelop. 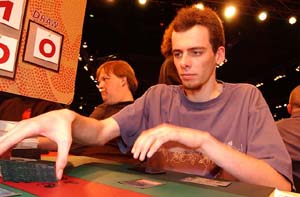 Van de Logt started in with the beats in the second game with a turn-2 Shade and an Edict for Krouner's Werebear. Krouner cast Quiet Speculation for three Roars on his next turn, and the dropped a Bearscape. Van de Logt kept attacking with the Shade.

When Krouner finally had enough mana to flashback the Wurms and play a Phantom Centaur, van de Logt had a faceless Butcher and another Edict respectively. The Shade and the tempo were too much for Krouner.

After that, Krouner never had much to do. He did get a Bearscape out, but van de Logt played a Shade and then Tutored twice for two more. With two Coffers in play, the Shades were way too much for random Bear tokens to handle.

Van de Logt may be able to get into the top 8 with a draw; Krouner definitely needs a win.