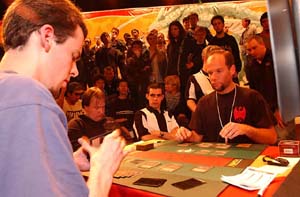 Dave Humpherys recently finished his PhD in Molecular Biology at MIT and then took off on an 80-day trip around the world to celebrate. His thesis topic was cloning – a topic that has been jokingly used to explain the performance of Tom van de Logt. Van de Logt has been unbeatable during the summer season, with three Dutch national titles, two Euros Top 8's, and two Worlds Top 8's. He's the defending World Champion and he needed just one more win to put up his third consecutive Worlds Top 8. However, sometime in late August he heads back to the Netherlands and retires to his cryogenic chamber while his clone plays out the remainder of the Pro Tour season. Van de Logt's clone isn't nearly as good at Magic, failing to even make day 2 in most events.

Humpherys seemed quite happy to be in contention when he sat down across from van de Logt to play for Top 8. "The Hump" didn't actually test for this event, instead he just arranged his around the world vacation so that he would be in Australia this week. One of the best things about having teammates – and Humpherys has some great ones from Your Move Games – is that when life interferes with your ability to prepare, they've got your back. Humpherys was handed a well-tuned blue-green block deck when he met up with his buddies earlier this week and he was 5-0 with it so far on Friday. Van de Logt was running mono-black (and was 4-1 with it so far) so this was the classic, archetypical battle that has defined this format.

Humpherys dug deep into his deck during the early turns of game 1 – he went through three Mental Notes and a Careful Study only to wind up with ... absolutely no gas. The end result of all that deck manipulation was eight lands, zero relevant cards in his graveyard, and a lone Wild Mongrel. Interestingly, The Hump kept that Mongrel in his hand, trying to prevent van de Logt from making effective use of his Innocent Bloods or Mutilates. Humpherys has always been good at bluffing that he has a good hand when hes actually holding garbage. None of Humpherys' tricks could save him, however, when van de Logt pointed a Mind Sludge at him. Van de Logt had all the time in the world to set up and when mono-black gets to have Mirari, Cabal Coffers, and a bunch of land in play that's almost never a good thing for the other team. 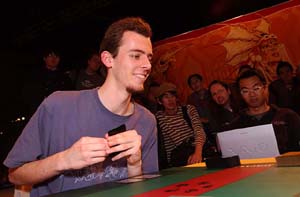 This time, however, Mirari plus Coffers didn't end the game immediately. Humpherys had already gone through all his land and so he kept drawing creatures. Van de Logt had to keep killing them, but he couldn't find either a Shade or a Tutor so he was reliant on his deck to keep delivering up removal. Humpherys actually managed to get lethal creature damage onto the table with van de Logt holding nothing, but van de Logt drew gasps from the spectators by knocking on his deck and drawing Mutilate. Noah Boeken (van de Logt's teammate on the Dutch national team) said it best: "The champ is here." After that they played draw-go for a while until van de Logt drew Diabolic Tutor and "went off."

Humpherys had another slow draw in game 2 – he couldn't muster his first threat until turn 5 when he dropped a Wild Mongrel plus a Standstill. One could argue that all draws are sow draws when Dave Humpherys is running them. His pace of play is notoriously slow plus his favorite tactic is to slow-play his spells, holding back threats until the time is right. Van de Logt immediately broke The Hump's Standstill with a Diabolic Edict and The Hump answered by dropping two Werebears plus another Standstill. Van de Logt broke that one for Diabolic Tutor, but then he was out of mana so Humpherys got to drop a third Standstill. The free flow of cards and van de Logt's slow mana development was all the opening Humpherys needed. Squirel Nest made sure he didn't run out of creatures and two Centaur Gardens denied van de Logt the time he needed to stabilize. Soon they were hurriedly shuffling up for game 3 with just 15 minutes remaining in the round.

David Humpherys has always been one of Magic's most talented players, but his game does have one flaw: he just isn't capable of playing quickly. Tom van de Logt is every bit as meticulous and deliberate as Humpherys so even with a Top 8 berth guaranteed to the winner and a draw hurting them both, there was no guarantee they would finish. 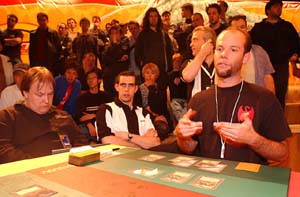 Van de Logt Butchered two of Humpherys' creatures, but neither the Butchers of van de Logt's Nantuko Shade could do anything about Phantom Centaur. The fact that he would get two creatures back if van de Logt was to Mutilate allowed Humpherys to play out a steady stream of Edict food. His Mongrels not only defended the Centaur from Chainer's Edict, but they also prevented those Butchers from attacking. Humpherys waited impatiently while van de Logt tried to figure out what to do about that Centaur and time ticked away. Van de Logt played Diabolic Tutor and couldn't find anything better than Mutilate. Because of those Butchers, Mutilate just wasn't good enough and van de Logt extended his hand, congratulating Humpherys. Score one for Phantom Centaur and score one for 30-something intellectuals everywhere.

4 Careful Study 2 Roar of the Wurm