Round 18: Fan the Flames

into the final round, there is quite a tussle for the final few spots in the Top 8. While there are some players that are locks for Sunday play, the same cannot be said for Paulo Carvalho and Christian Flaaten with just one match to go. 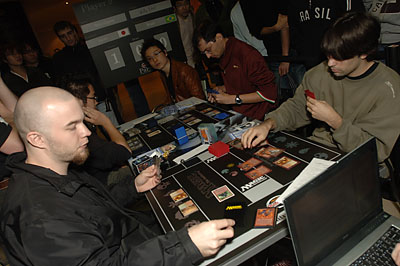 A spot in the Top 8 sat in the balance.

After some careful standings checking it just looked like too much of a gamble to go with an intentional draw for Christian, meaning that there would be quite a battle in the final round.

Christian won the roll, and had a fetchland to find a tapped Steam Vents on the first turn, which was matched by a fetchland for Sacred Foundry, and then topped by an Isamaru, Hound of Konda from Paulo, who was battling back from a mulligan on the draw. The dog was followed up by a Grim Lavamancer on the Portuguese side of the board.

The first play from Flaaten was a Boros Swiftblade, who got to attack unimpeded, only to be pumped by Gaea's Might, with Sacred Foundry and Steam Vents in play.

"Take 10!" demanded a cheery Flaaten, who followed up with a Kird Ape.

A Savannah Lions came out for Paulo, but it didn't matter. He was on the receiving end of an utter beating of a draw from Christian. Tribal Flames to the face hit for four, and with more attacks and a Lightning Helix it was all over with incredible speed.

On the draw, Christian was the player to have to mulligan, and was quickly facing down a Grim Lavamancer (via fetchland shenanigans to find a Sacred Foundry). The fetchland for Christian was Stomping Ground to power out a 2/3 Kird Ape.

A second Lavamancer came out for Carvalho, only to be matched by a similar deuce from Christian. One monkey up, he looked to be ahead - and crucially, having used an additional fetchland, his Lavamancers ability would be active.

Paulo's response to this was to crack a fetchland to find a third land, then use Sudden Shock and one of his Lavamancers to clear out the fiery wizards on the other side of the board.

Christian remained calm. He played Boros Swiftblade, applied some monkey beatings, and passed. The life totals were 12 to 13 in Flaaten's favour, but things appeared very tight. 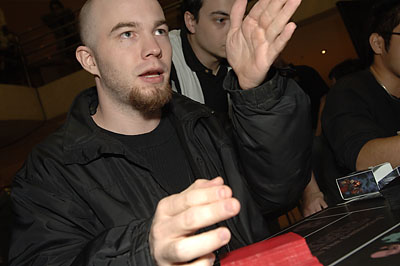 Flaaten's army of Apes kept on the attack.

When all Paulo did for his turn was to play a tapped dual land and pass, leaving 2 copies of Sacred Foundry up, along with a mountain, Christian looked intrigued. Something was up here, but it wasn't clear what.

Flaaten played a Breeding Pool, and attacked with his men. Grim Lavamancer #1 blocked (just in case!), and died to first strike damage. This gave Grim Lavamancer #2 enough fuel to shoot the Swiftblade.

"It's alright, the monkey will do the job," remarked a confident Flaaten.

On his turn, Paulo played a Goblin Legionnaire and passed. Flaaten was at 12 to his opponent's 10, but now had to face down a monkey trump. Lightning Helix was his answer, forcing the Legionnaire to kill itself to set up a damage shield for the turn. Christian then played a Lavamancer and passed.

When Paulo had an Umezawa's Jitte though, all of a sudden things looked pretty tough for the Norwegian. It got equipped to Grim Lavamancer, who traded with his doppelganger, and was soon replaced by a Savannah Lions.

These lions traded, with the help of the Jitte with the monkey, and Flaaten had to beg "please no creatures" of his opponent's draw. It was not to be though, as a steady stream of monsters picked up the sword.

Finally, the samurai showdown came when a Watchwolf from Flaaten ran into Savannah Lions from Paulo, who had the Jitte. They traded with the wolf and a Gaea's Might from Christian, with Paulo following up with yet more monsters in Isamaru and Silver Knight. Drawing lands of the top, Flaaten was out of this game, meaning the match would be decided on the final game.

Flaaten mulliganed his opening six, declaring that he didn't seem to lose much when he mulliganed. On 5-0 for the day, he clearly hadn't been losing much at all.

With the only turn-one play, in the form of Isamaru, Hound of Konda, Christian was ahead on the board, if not in the damage race, as he used fetchlands to fetch untapped duals. A Watchwolf followed, and when Carvalho had a Silver Knight the Norwegian couldn't help but look at the protection from red and declare "weakling" on it.

He played a Wild Mongrel, and kept on swinging. The life totals were 14 to 13 in his favour. Swings from Watchwolf and Wild mongrel the following turn prompted a block from Silver Knight on Watchwolf, and a Lava Dart to finish it off with first strike. Sudden Shock dealt with the Mongrel, and suddenly Paulo was looking good. 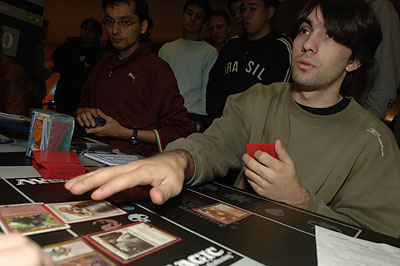 The Portuguese National Team member would not be denied.

"Not to worry, I have more," quipped Flaaten as he dropped another Watchwolf onto the board.

He could only sigh as his opponent played and equipped an Umezawa's Jitte on his Silver Knight, creating a truly formidable threat. Flaaten didn't block, and had his Isamaru die to Jitte counters. He then swung back and played a Boros Swiftblade.

Paulo's swings meant that he had the option of taking down Boros Swiftblade, but instead he went with a Lava Dart and used the counters to take down Watchwolf. He then followed up with Paladin en-Vec in what seemed to be a game breaking play.

Christian had a pretty impressive play of his own though, in the form of an Armadillo Cloak for his Boros Swiftblade, who could now attack over the top of Paladin en-Vec, and keep Christian in the race. It's not quite Rith the Awakener, but it drew a gasp from the crowd nonetheless.

The Jitte moved to the Paladin on the following turn, who was joined by a Soltari Priest. With Carvalho at 8, Christian was drawing very slim to stay in the match. Christian played a Kird Ape, declaring that from this position he didn't know how he could win.

He barrelled in nonetheless though with Boros Swiftblade, and had it die to two flashed-back Lava Darts and first strike damage. Christian showed that he had two copies of Tribal Flames that would each hit for 4, but with the Jitte counters there it just wasn't enough.

Paulo Carvalho wins 2-1 and earns a spot in the Top 8!