Round 18: Jon Finkel vs. Jan Tomcani 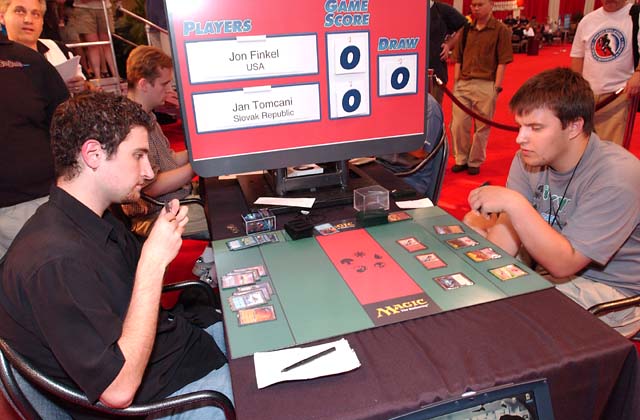 Remember Finkel? Well, he's back. This time, he's just one match away from the Top 8 at Worlds. The last job for The Dreamcrusher before waltzing into Sunday was to dispatch Slovak Surprise Jan Tomcani. The completely unsung wunderkind finished ninth and just out of the spotlight at Barcelona this year. He's gotten plenty of limelight this weekend, having 6-0'd Day 1 with Fires.

Tomcani bought a first-turn Cursed Scroll off a mountain, revealing the tone this match would take. Finkel countered an early Seal of Fire, and went for it, tapping out for Ophidian. He let Seal of Fire resolve, and Misdirected Shock back at Tomcani. Tomcani turned over a second Shock. Finkel just sighed and shook his head.

The pain kept on coming. Viashino Sandstalker was countered, but Pup came in just fine, putting Cursed Scroll online. Finkel dug into his deck by cycling Veiled Serpent. Tomcani had to read the card, drawing laughter from the crowd. Still, Tomcani didn't have any trouble finding extra gas to punish Finkel's land-heavy draw. A second Pup turned Finkel's situation into a Class 4 Drubbing.

Without a Masticore in his next two draw phases, Finkel checked the prices on farms, and bought one. 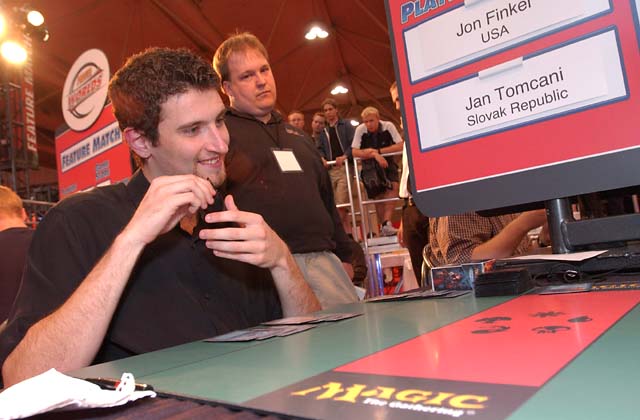 Finkel mulliganed in game two, and his ordinarily dispassionate expression darkened significantly. He kept his six-card hand, but was clearly unhappy with it. He played out island, City of Traitors, and Powder Keg. Tomcani already had Pup and Scroll on board.

Tomcani took liberties, playing out Rishadan Port to lock down Finkel's lone island. The raised eyebrow it earned was the Finkel equivalent of falling out of his chair and through the floor to the surprised onlookers below. Finkel held fast to the Keg, keeping further Pups from coming into play.

Tomcani continued to grab the gusto, with a Pillage on the island. Finkel Misdirected to the Port, pitching Boomerang. Tomcani dropped elbows with Pyroblast. Finkel retorted with Force of Will, pitching Thieving Magpie. It was still a knife in Finkel's ribs, as he had only two cards left. 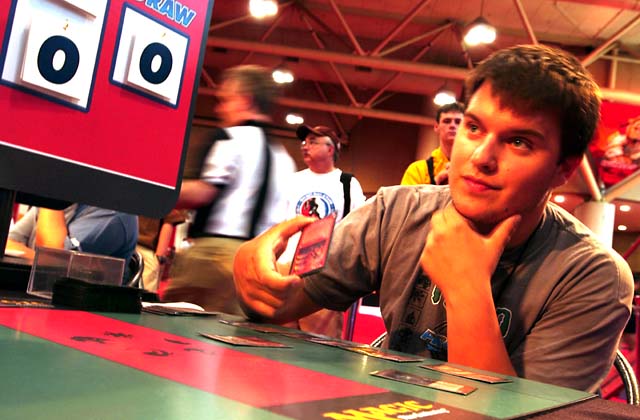 One of them was the Ophidian he brought down. Tomcani Raged like it weren't no thing. Finkel checked his life total and popped the Keg. Tomcani came over the top with Viashino Sandstalker.

Finkel blew his City for Thieving Magpie leaving him with two card in hand. Tomcani sacrificed two mountains to Fireblast the bird. His Sandstalker was Forced, but Mighty Finkel was on the wrong end of an active Cursed Scroll. A second one didn't help matters. He didn't even bother to play it to the bitter end, extending the hand at six life.

With that win, Tomcani secured his place in the Top 8.