Round 18: Katsuhiro Mori vs. Frank Karsten 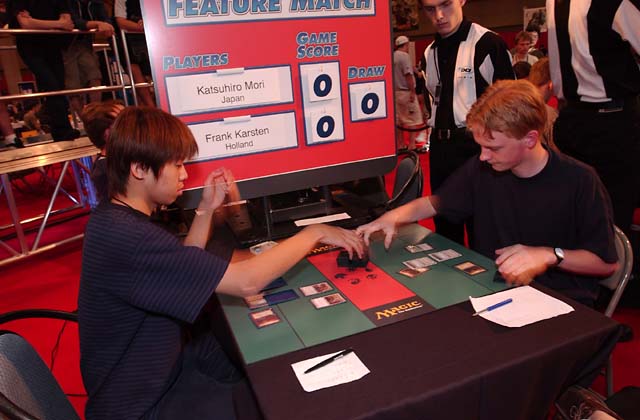 Going into this match, Katsuhiro was a virtual lock for Rookie of the Year. A win this match would mathematically clinch the title, and guarantee Mori Top 16 (and perhaps Top 8). Frank Karsten, a member of the first place Netherlands team, was looking to extend his team's 12-point lead over those of Japan and the United States.

So it seemed fitting that both players were using variations on the same deck - white weenie with blue splash. Mori's deck employed Empyrial Armor and traditional choices like Paladin en-Vec and Warrior en-Kor, while Karsten's preferred a short rebel chain and the old stand-by, Cursed Scroll.

Mori started game one, as both players kept their hands. Competing Mothers of Runes soon gave way to Mori's Swords to Plowshares. The rising Japanese star also used Swords on Karsten's turn two Ramosian Sergeant, and laid down a Soltari Priest on game three to start the pressure.

Karsten played a Meddling Mage. The card prevented (Ramosian Sergeant) was less strategic than the fact that at least now the Dutchman could trade equal damage, on the opposite side of the "shadow" rift. When Mori put down a second Soltari Priest, Karsten simply laid down a Cursed Scroll on his own fourth turn, and things started to look a bit grim for the rookie.

But Mori slapped down an Empyrial Armor on one Priest, and Karsten did not have enough mana to read off the Scroll. The Priests swung for a total of six, bringing Karsten to 13.

The next few turns were a disaster for Karsten. After swinging with his Meddling Mage, he decided after some deliberation to Swords it . . . so he could play his own Ramosian Sergeant! At least he was also able to play a Seal of Cleansing, with an eye to that Priest's Armor. 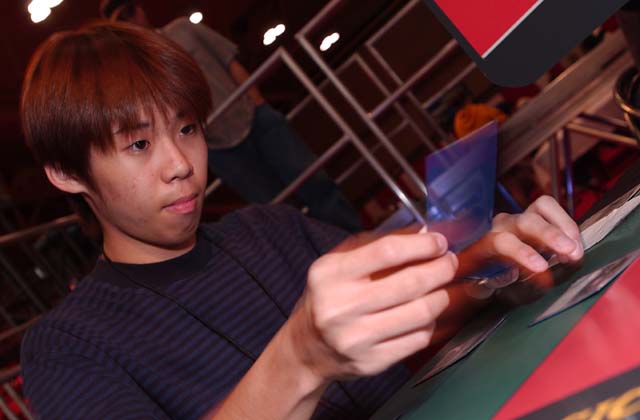 On Mori's turn, he swung, saw his Priest lose the Armor, still did four, and then laid down a Paladin en-Vec. The turn after that, he swung with the Priests and Paladin, lost a Priest to the Scroll, and then put down another Armor, this time on the Paladin. The Armor, however, was light: Mori had no cards in his hand.

This is where Karsten's may have missed a small opportunity: rather than Scroll the Paladin during his own turn, he followed conventional wisdom and decided to wait until the next combat phase. The problem, of course, was that Mori got a draw step between point A and point B, and when Mori did finally swing, Karsten hesitated long enough for this reporter to feel that he realized his mistake. He targeted a Priest instead, and Mori simply held onto his card, keeping the Paladin at 3/3. After his own draw, the Dutchman scooped.

Both players kept their game two opening hands, as well. This time, Karsten came out more strongly from the start, pushing out two Scrolls by turn two and a Soltari Priest on turn three. Mori answered with a Warrior en-Kor and Meddling Mage (calling Meddling Mage) by the end of his third turn, but Karsten had emptied out most of his hand, and each creature fell on successive turns to a Scroll. 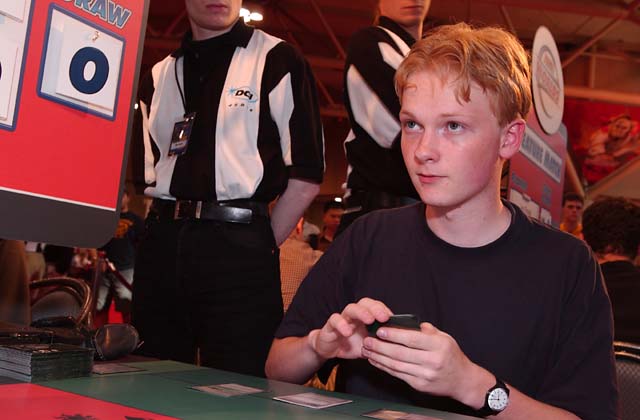 Mori watched the Priest nibble at his life total over three or four turns, and did look for chances to slide out his Seals of Cleansing. When he got out his second, he sacked both to destroy the Scrolls, and on turn eight he demonstrated his anti-weenie tech: Samite Archer.

Karsten had four creatures on the table between that point and the end of the game; three of them had one toughness. After a second Archer joined the first, even the fourth creature (a Meddling Mage) had nowhere to hide. A Paladin en-Vec, a Meddling Mage, and a Warrior en-Kor came joined forces to finish Karsten off. And like that, a new Rookie of the Year was born!