Round 18: Keep Your Eyes on the Top 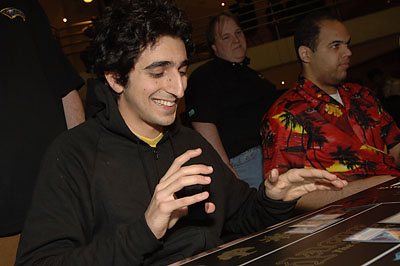 Gabriel Nassif laughs as he attempts to levitate his cards.

Nassif was struggling for his first Sunday appearance in years, while Jonathan Rispal was struggling to pilot his combo deck to a high finish to do the deck justice. Jonathan has the French "Omelette aux Lotus" creation that abuses the Odyssey Eggs, while Nassif is playing a control deck sporting the powerful combination of Counterbalance and Sensei's Divining Top.

Gabriel started off with a mulligan. Knowing what Jonathan is playing, he must have been looking for permission pieces. What he found in his opening six was a Sensei's Divining Top. Jonathan answered with two Eggs (Conjurers' Bauble and Chromatic Star) and a Lotus suspended on turn two. These two were playing for Top 8 and the tension was palpable between the two countrymen. Neither really wanted to knock the other one out, but they could not draw so slugging it out was the only choice.

Gabriel played the Counterbalance that made up the other cornerstone of his deck. With a combination deck full of one-casting cost artifacts, the dreaded Top-Counterbalance combination promised to be backbreaking for Jonathan. The combo player had Lotus Bloom with one counter left, and if Gabriel would reveal a land when the Lotus would come into play next upkeep, the game would basically be over.

Jonathan went for Reshape, sacrificing his Seat of the Synod. Gabriel smiled at photographer Craig Gibson doing his job and then fell into contemplation. Countering the Reshape would bring mana advantage to the max, because with the Counterbalance already in play, Jonathan knew that his only chance to get a Lotus would be that way right now. With Reshape on the stack, Gabriel used Flooded Strand to shuffle his library and looked into his Top. 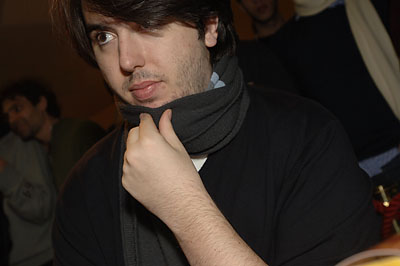 Jonathan Rispal never removes his scarf… Do not ask why.

When Gabriel revealed Counterbalance on top of his deck to counter the Reshape, Jonathan knew he was in bad shape. Gabriel activated the other ability of the Top to get the Counterbalance off his deck, and replayed the little powerhouse artifact on his turn. On Jonathan's next upkeep, Lotus Bloom tried to come into play. Once again, Gabriel looked into his Top.

When he revealed a land to counter the Lotus Bloom, Jonathan scooped up his cards, giving Gabriel Nassif a one-game lead.

Sideboarding was a quick affair for Jonathan, who brought in 3 Engineered Explosives, 1 Wipe Away and 1 Pithing Needle, taking out 1 Orim's Chant, 1 Tolarian Winds, 2 Eggs and a Cunning Wish.

Gabriel took a little longer, finally deciding to bring almost his entire sideboard to play. Here's what he put in:

…here's what he took out:

Of the six matches in the feature match arena this round, the French on French match drew the most spectators, not surprising for a match between countrymen with the Top 8 of the World Championship on the line. But possibly the most exciting match was the one between Osyp Lebedowicz and Tsuyoshi Fujita. Check out Randy Buehler's podcast [link] for details on that match!

In the match between the French, Gabriel again started off with Sensei's Divining Top and Jonathan had the Chromatic brothers, Sphere and Star. Gabriel was already deep in thought and asked for the Oracle wording of Reshape. When he got it, he put Counterbalance into play, tapping out for the enchantment.

Jonathan used the window and tried Engineered Explosives for two, but lucky Gabriel revealed Meddling Mage off the top of his deck. To prevent him from drawing the Mage, at least for a turn, Jonathan made Conjurer's Bauble which Gabriel countered by putting his Top on top. That tied up his draw and his mana for a turn. But Jonathan was not able to use that to his advantage, putting just a Plains into play and passing the turn. When Gabriel finally drew the Mage, he confidently put it into play, naming Cunning Wish.

Gabriel dealt the first damage of the match with Meddling Mage beatdown, following that up with yet another Pikula, this time naming Second Sunrise. Jonathan dropped Wipe Away on Gabriel's Top at the end of Gabe's turn, because he needed that opening to play his Eggs.

Mossfire Egg led the Mossfire Egg led the charge. Gabriel let it resolve. Then Jonathan went for Reshape with X=0, looking to get a Lotus Bloom into play at last. All eyes went to Gabriel’s library. When Gabriel revealed Dwarven Blastminer, converted mana cost 2, Jonathan slumped and extended the hand, sending Gabriel Nassif to the Top 8 of the 2006 World Championships! 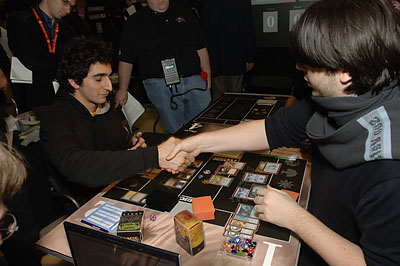 The two Frenchmen shake as Nassif takes it home.