three grueling days, it's the final round of individual competition before the cut to the Top 8. Katsuhiro Mori of Japan comes into this round living a nightmare and a dream all at once. After winning his first round this morning he had a lead over the field, likely needing just four points in five rounds to lock in a Top 8 spot. Since then he's lost four times and drawn once in a collapse that, should he miss Top 8 here, would be one of the worst Day Three disasters from any leader in the history of Magic's World Championships. 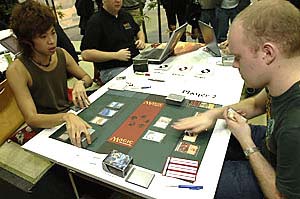 Mori and Postema enter. Only one leaves.

Facing him is a player from the Dutch national team, Bas Postema. Bas also needs a win here to make Top 8, but he has already lost to Mori once this week (in the draft event). But, Bas has a much better 3-1-1 record with his Extended deck Friday.

Postema brings Boros Deck Wins to the table, an aggressive red/white burn deck that will look to put the game away as quickly as possible. Mori is slinging a deck many of the Japanese are playing today, a blue/white control deck splashing red, built around Isochron Scepter.

This one started with an old favorite: "Land, bolt you." In Magic's earliest days that phrase was popularly used to describe a bad player, but in this case it's proof that Bas knows exactly what he's matched up against, knowing he won't need to save much burn for creatures aside from the occasional face-down Exalted Angel. Here's how the early turns played out, with Mori's life total shown in parentheses and each row representing a turn.

At this point Mori cast an end-of-turn Fact or Fiction, getting a choice between triple Fire/Ice or Island+Isochron Scepter. The Japanese player jumped at the big stack, then cast a main-phase Cunning Wish for Pulse of the Fields (Mori: 8), using his last mana to cast Orim's Chant on his opponent's upkeep, which drew an exasperated look from Postema. Postema thought hard, then decided to just play a land and burn for 6. (Bas 9, Mori 8) 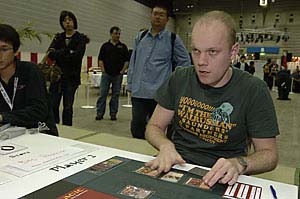 Postema needed to race with his Boros buddies.

On Postema's next turn it was flashback Firebolt, but Mori cast Pulse, then Iced his opponent's last land twice to cycle into a hand that allowed a protected Fact or Fiction next turn.

By his next turn he had two Exalted Angels in hand and Absorb for backup, and that was too much defense for Postema to get through. Out of gas, he fell quickly to angelic thumpage.

Postema opened this one with a mulligan, but his six-card replacement worked out nicely.
Goblin Legionnaires led the beatdown turn two, followed by Savannah Lions. Mori fended off a Stone Rain with Absorb, but faced a tough road. He was taking significant damage from his lands and was behind on tempo as he tried to deal with the disruption from his opponent, develop his mana, and also work around with the Onslaught of creatures coming at him.

A Wrath of God cleared the board, but a troublesome Silver Knight came next. A swing with the knight brought Mori to 9, and Molten Rain dropped him to 7. Mori went for Fact or Fiction, getting two angels and an Absorb. But, sitting on a fist of countermagic and angels, he only had four mana so couldn't get his angel out protected. A turn later he went for Pulse trying to get out from under the Knight's assault, but a double Lightning Helix in response put him away.

Time for the decider, and both players were showing the strain. Here's how the early turns played out in this one. (Mori's life totals in parentheses.)

The Fact or Fiction revealed five spells and ended up being a choice between Thirst for Knowledge and Pulse of the Fields or Wrath+Fire/Ice+Counterspell. Mori thought forever on this one, clearly agonizing over the choice. In the end he took the big pile and cleared the board, dropping to a vulnerable 4 life with no mana to protect himself. 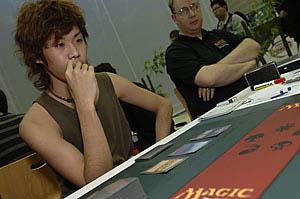 Mori deliberated through many late-game turns.

He passed the turn.

Postema looked tense. "I don't know yet," said Postema, with two Firebolt in the 'yard, but only three mana in play.

A Goblin Legionnaires came into play, but that was all Postema had for now. Mori played land No. 6 and passed the turn, casting Ice on the Goblin, which shot him for two instead, dropping him to a precarious 2 life. Mori played out a facedown angel, and his opponent replied with Savannah Lions plus a Silver Knight. The creatures began racing, with Mori hovering in the 2-6 range while Postema got bashed down to 5, and then used a land that put him to 4.

In the final turns, as time was called, Postema had a Helix countered that would have put him out of kill range for another turn. He untapped, sent in with his two beaters, and Mori used his last five mana to cycle a Decree of Justice, allowing a block on each creature and keeping him out of burn range from the last card in Postema's hand.

Postema thought a while, but he was out of outs. He tapped out, flashed back a Firebolt to drop Mori to two, and passed the turn. Mori didn't even bother swinging with his angel, showing a hand of Lightning Helix and Fire/Ice.

And just like that, this exciting match was over, and Katsuhiro Mori was going to the Top 8 after all.