Round 18: The Path is Clear 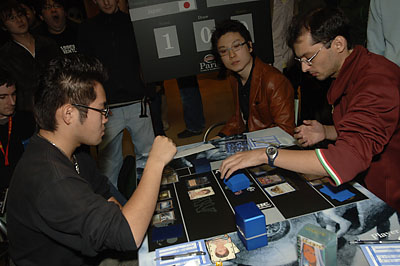 For at least one of these players, this would be the final match of the event.

it comes to the pairings, sometimes you end up with a player who could possibly make the Top 8 playing someone who definitely could not. Going into the last round, Ryou Ogura was hoping for a win and some miracles involving his tiebreakers for a shot at the Top 8, while Willy Edel is looking for a shot at the Top 16. If Edel were to win this match, he would pocket a bit more money, and most people would never about it. But if Ogura were to pull off the win and his 'breakers were to break with him, then it would be the upset come-from-behind the Japanese spectators are looking to see.

Edel's Grim Lavamancer was very quickly starring down a Zombie Infestation thanks to a Chrome Mox from Ogura. The Lavamancer was capable of holding off the swarm of Zombies that would soon follow, but Ogura used the Infestation to bin a Golgari Grave-Troll and quickly had something like two thirds of his deck in his graveyard. Edel fought back at the incoming slew of Ichorids with Lava Dart, but was soon overwhelmed by the Army of the Undead.

In Game 2 Ogura answered Edel's turn one Savannah Lions with the innocuous play of Polluted Delta, go. Edel then dropped an Umezawa's Jitte, which seemed to cause Ogura to subconsciously thumb the Ancient Grudge sitting in his hand. Ogura fetched an Overgrown Tomb at the end of Edel's turn, before again dropping a Zombie Infestation. 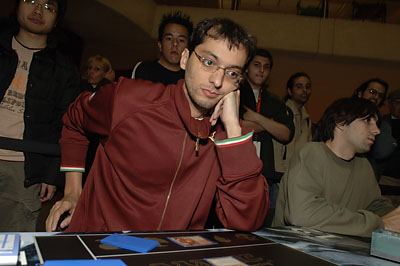 Edel's excitement at the Infestation was palpable. Or something.

Edel elected to leave his Lions at home and instead bolstered his army with a Goblin Legionnaire. Ogura made a Zombie at the end of turn, dropping two Stinkweed Imps right where he wanted them. He untapped and dredged one of the Imps back, revealing a Darkblast and a Golgari Grave-Troll before passing the turn back to Edel with his mana open. 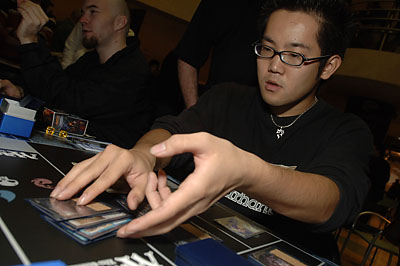 With a possible Top 8 on the line, Ogura and his zombies were ready for the challenge.

Edel walked right into the trap by throwing a Lightning Helix at the Zombie before equipping the Jitte to his Legionnaire and swinging into the Infestation. Ogura discarded the Ancient Grudge to make a new Zombie, and flashed it back to shatter the Jitte. The Zombie then traded with the Legionnaire, leaving Edel with only a Savannah Lions in play. Ogura untapped and made a Psychatog, with more than enough Dredge cards in his graveyard to make things messy for Edel. The Brazilian untapped, made a fifth land and passed back the turn with a shrug. As Ogura reached for his Grave-Troll at the start of his turn, Edel just extended his hand with a smile.