Round 18: A Soul Crushing Of The Ages

Nico Bohny and Josh Utter-Leyton had already battled in front of my laptop this weekend, yesterday, in round 10, just after lunch. Bohny took game one, but Utter-Leyton emerged victorious in the end. All of the rounds later, and here they are again, each a single win away from the top 8. 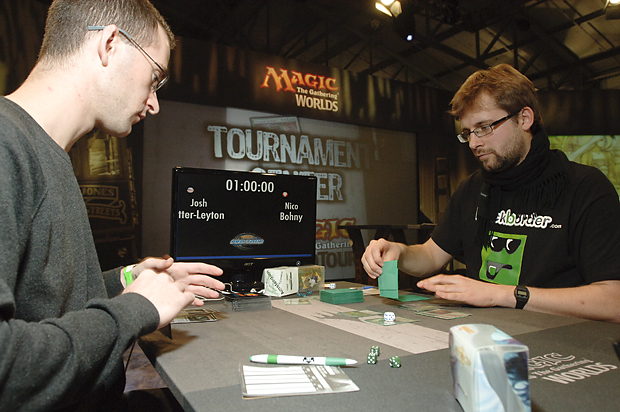 Can Nico Bohny get revenge for his round 10 loss against Josh Utter-Leyton in order to get into the Top 8?

And while it goes without saying, I'ma say it anyway: a single loss away from a Soul Crushing of the Ages.

Utter-Leyton won the die roll, but mulliganed to five on the play. His turn-one Steppe Lynx gained very little traction as he missed his third land drop, while Bohny summoned Sakura-Tribe Elder, into Garruk Wildspeaker, into Death Cloud for Utter-Leyton's everything (okay, he got to keep 2 cards in hand), followed by Liliana of the Veil. 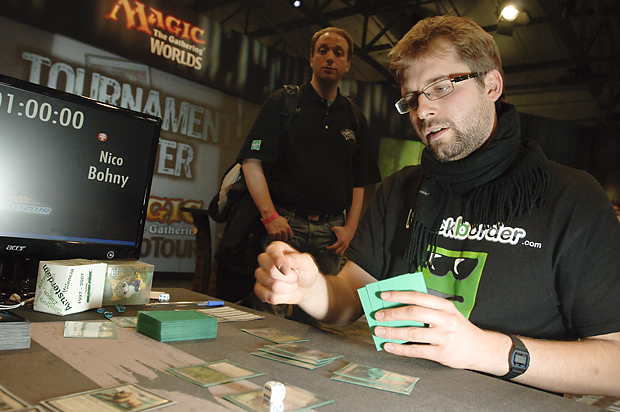 No, Utter-Leyton did not last long after that.

Keeping the full seven in game two, this time Utter-Leyton came screaming out of the gates with a Wild Nacatl and a Tarmogoyf, beating Bohny down to 11 life before he'd even had his third turn. Liliana of the Veil ate the Nacatl, but Utter-Leyton correctly ignored her, attacking and soon finishing Bohny off with a Tribal Flames for 5.

It was Bohny's turn to mulligan to five in the decider, leading with a tapped Overgrown Tomb. Utter-Leyton, of course, promptly dropped to 17 to fetch out a Stomping Ground, and he summoned a Wild Nacatl. Bohny soaked up the first attack with Sakura-Tribe Elder, and Utter-Leyton passed back the turn with no second creature. Bohny, making a mulligan to five look easy, cast Liliana of the Veil.

Like, seriously. A mulligan to five, your Zoo opponent didn't play a second creature, and you're about to land a turn-three Liliana of the Veil? How sweet is that?! Well, Utter-Leyton had two words for Bohny. 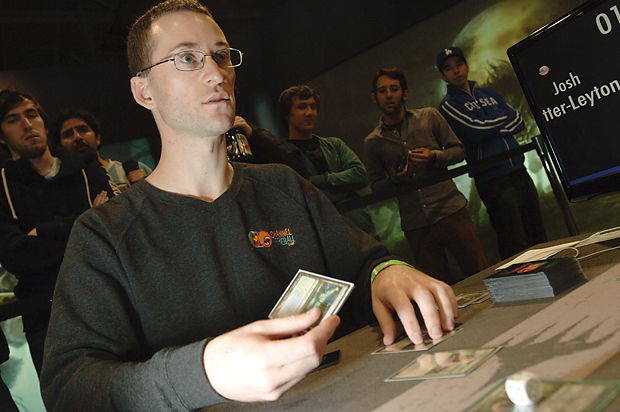 Utter-Leyton followed up with a Tarmogoyf, only to see Bohny summon two of his own. Many turns passed, as each player took turns playing more and more creatures, gumming up the table in a sea of (mostly) green. Eventually, each player had three Tarmogoyfs apiece, and a whole slew of veritable hangers on. Thankfully, hordes of rabid binder-carrying traders were held back by the barriers surrounding the feature match area.

At this point, I'm sure Utter-Leyton was wishing he was running an Overrun somewhere between his deck and sideboard to break a ground stall like this, but spoiler alert: he wasn't. Instead, he searched up some Steppe Lynxes with a Ranger of Eos, and started laying out some un-cracked fetchlands.

If Bohny was concerned, he didn't show it, waiting until Utter-Leyton finally added a Knight of the Reliquary to the table (no doubt able to search out a stall-breaking Kessig Wolf Run) before pulling the trigger on a Damnation. Utter-Leyton swept his army into the graveyard with barely a frown; a lowly Kitchen Finks left to wonder where everyone went.

Utter-Leyton recovered with another Ranger of Eos, while Bohny could only draw individual removal spells. Two Slaughter Pacts could only do so much when Utter-Leyton's creatures came with gate-crashers, and a Snapcaster Mage sealed the deal, flashing back a Tribal Flames to send Josh Utter-Leyton through to the Top 8.

3 Liliana of the Veil 3 Garruk Wildspeaker

4 Knight of the Reliquary 1 Kitchen Finks